With so many Peregrines in London now I am spending more and more time trying to keep tabs on them, the best time has always been dawn, this is when you will likely get the information that you require to either confirm breeding or simply going through the motions of summering/ non breeding.
Such was the case this morning, up at just before 5.00 and in position by 5.45a.m,many of London’s Tiercels have a habit of slipping away in darkness to favoured areas where feral pigeons leave a roost, if you miss this you arrive on site and there is nothing. A Tiercel can be away from site sometimes for hours, once they have killed the Falcon will come out and feed, the Tiercel will then incubate. Once she has fed and filled her crop, she may just lay up and rest/or go straight back on the eggs, usually to the annoyance of the Tiercel, many are reluctant to hand over as they like to incubate. He may well hunt again in the afternoon after feeding off the remains of what the Falcon has left or he may retrieve stashed prey.
As it turned out I sat there for 2 hours, I know they are there but it is likely he went in complete darkness and I didn’t see him go, additional to this I know of at least 3 pairs in London that are hunting at night, mainly in the winter months. If this had happened at this site he or she would have been present after feeding, either incubating or profile perching on ‘guard ‘duty.

Moving on to another site where they successfully bred in 2011 I was surprised to find a hybrid present, I knew he was in the area but it now appears that he/she has either paired with the Falcon/Tiercel or the pair from last year have moved site.
It appears from others that this bird is disrupting breeding to 2 pairs it seems ,I know over the last 2 weeks there has been some dogfights with a 3rd bird involved, presumably it could well be the hybrid.
I first saw it about 4 years ago, presumably it is the same bird, I know it has been doing the rounds of London as I keep hearing reports of a grey morph Gyr/Peregrine type here and there. Escaped Falconers birds are a pain in the arse around London, the worry is that they will get into the peregrine bloodline.Dont get me wrong, it is a stunning looking bird but it is not good news if it disrupting breeding due to its size of an established pair.
After making a few mental notes to contact NaturalEngland I moved on to another site.


By the time I got there the Tiercel was resting up on a Crane; this overlooks the incubating Falcon and is the male’s favourite perch.
On arrival a very amusing sight greeted me, the crane was working and the Tiercel was still in position perched at the very top!
Such is his bond and territorial tie to the nest site and the crane, (he could easily move to another lofted location nearby but further away) he stayed in position. 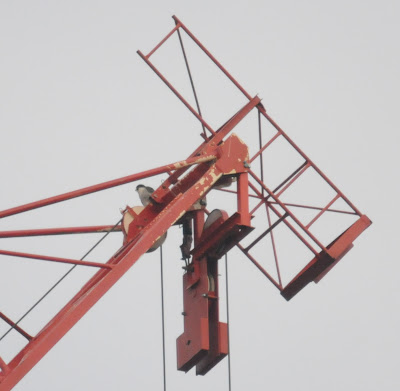 For the duration of the visit, about 40 minutes, he travelled north, south, east and west, up and down, only occasionally lifting a wing or 2. The cable wheel at the top was about 500mm from him and constantly revolving, by his actions he was obviously used to this.
He was alert but it looked like he was not going to move for man or beast, the resilience of Peregrines never ceases to surprise me, I left there laughing as I saw him going on another circuit.