All week I had promised myself a day out, my wife Christine was in Brighton living it up with her sisters Pat and Margaret, I thought strike why the iron is hot, so to speak. Minsmere was the destination, Thursday I was free, after all the glorious weather we have had it then decided to turn overcast and cold, Minsmere was now not so inviting so I reverted to plan B, I went to Canvey Point.
I was not expecting much as it was so early in the year, the tide was still out on arrival at 7.10, the weather as promised was crap, bloody cold with a biting north easterly but none the less I persevered until the tide came in.
Nothing that really stood out other than the Bar Tailed Godwits movement, highlights were

2 Little Egrets
237 Dark Bellied Brent Geese - a flock of 137 in front of me and a 100 distantly looking towards the pier, I imagine these will go very shortly.
180 Bar Tailed Godwits - 80 going out @7.19am and then another flock of 100 @ 7.35am going out as well, both flocks were obviously on migration and were last scoped going towards Southend Pier. Rather early I am thinking for any movement?
50 Knot – these were seen heading to roost.
All the other commoner waders were seen with good numbers of Curlew and Oystercatcher present, Turnstones as well. 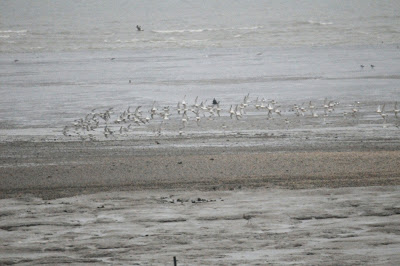 Checking the roost and it was quite clear there were more Bar Tailed Godwits; they seemed mainly to arrive with the Knot as opposed to their namesake, Black Tailed Godwit.
At high tide I did a count and recorded the following:


All in all, a total of 227 Bar Tailed Godwits recorded, the first 2 flocks seen continued on their way towards the pier and Foulness beyond, with the roost count it is an impressive number of birds in the area.


I checked both the Portland Bill and Dungeness websites for any movement; none whatsoever so it appears this was an isolated event.