I have had the chance again recently to visit the Marshes, without doubt one of my favourite places having been involved in its transformation right from the start.

Visits of late have produced good migrants, although there has been a distinct lack of Wheatears, this place is usually a Wheatear magnet.
Without doubt it is the most flooded I have seen it in a number of years, however it bodes well for breeding waders, large floods for a food source that will take a while to dry up.

On my last visit, plenty of Yellow and White Wagtails seen working the area along with a distant clucking Ring Ouzel. 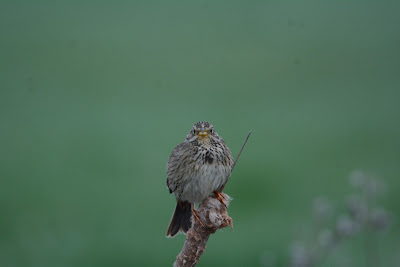 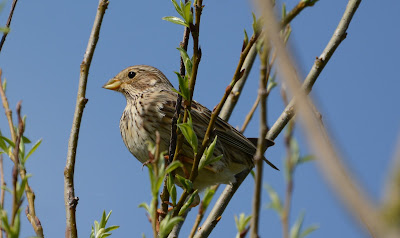 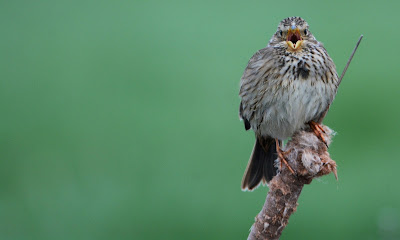 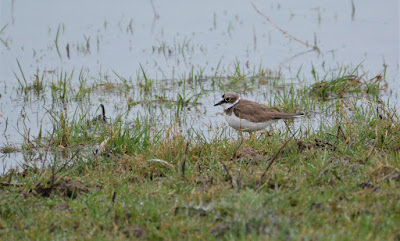 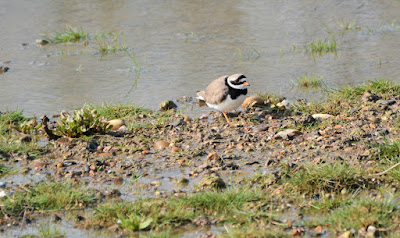 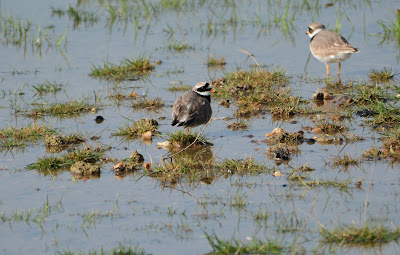 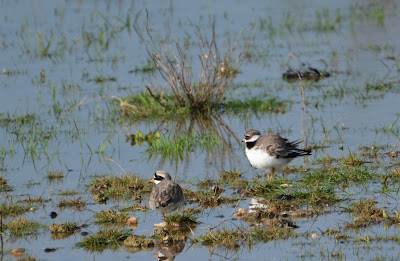 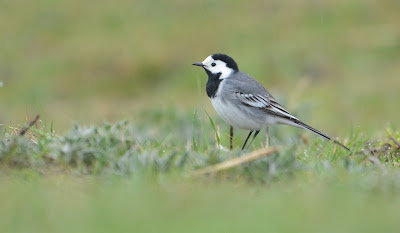 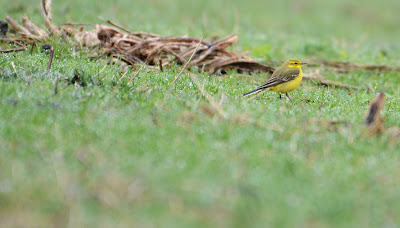 Perhaps the oddest record was a flyover Hawfinch, no doubt part of the national influx, can only presume it was looking for pastures new, hopefully some will stay and breed.

A massive flock of summer plumed Black Tailed Godwits was seen coming from the direction of Northward Hill, they headed straight over to Coryton, Essex presumably to roost at Holehaven Creek.

I am out there again this weekend, hopefully more of the same.

With a glorious day forecast and wall to wall sunshine predicted, I was over the Sewage Works again from 1st light.

With migrants now starting to arrive, it was good to hear a number of Blackcap singing as I drove through the site.

Came across the male Kestrel at roost and I sat in the car and watched him, positioned near the nest box, I suspected that she was inside.

This was shortly confirmed that she was, and had laid eggs, when he undertook a nest relief and she exited to feed on what looked like a Mouse. 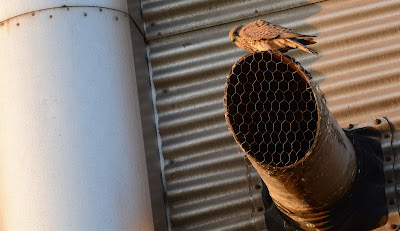 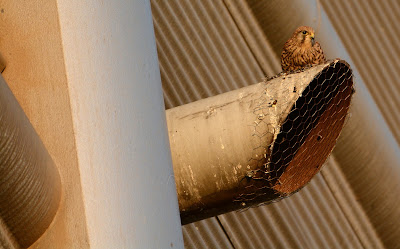 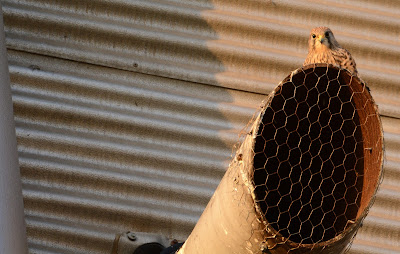 After about 5 minutes, with the mouse entirely consumed, she re entered the nest box to resume incubation.
Incubation of eggs is around 27-29 days so not dissimilar to peregrines, although in most cases Peregrines lay around 2+ weeks earlier. 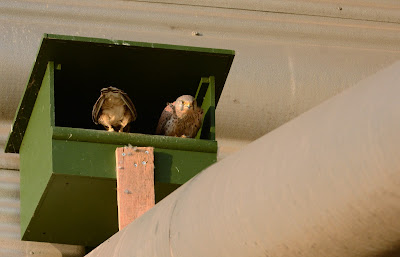 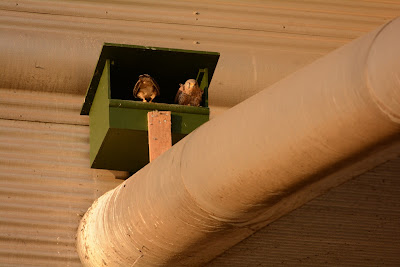 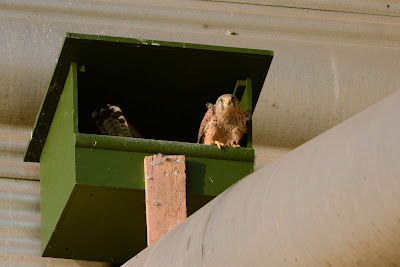 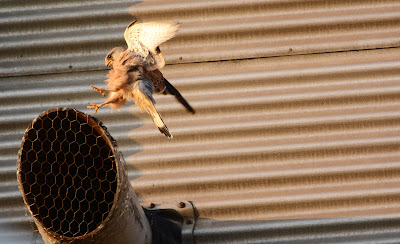 Now looking forward to seeing young, the position of the box will give the young a large roof to exercise on and build wing strength for that all important 1st flight.

Moving on from here to check some favoured areas, I again came across the Common Buzzard, admittedly I thought it would have been long gone by now as we are into its breeding season.

I am now thinking that it may possibly summer, there’s certainly no lack of food here for it,(think Watership Down) it could well be that it is not mature enough yet to breed.
From the car I watched it moving round and ‘working’ the site, they are quite confiding and tolerant of occasional Thames Water traffic, in some cases Vans passed only 5 metres away and no reaction whatsoever. 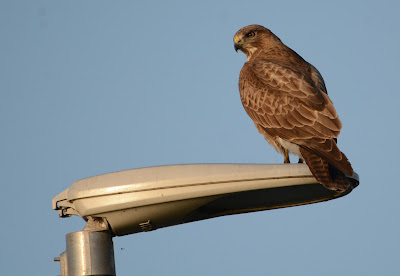 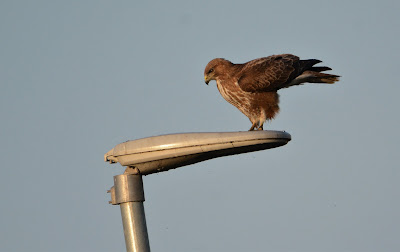 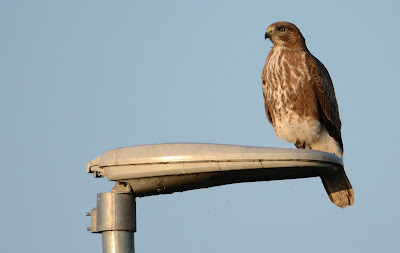 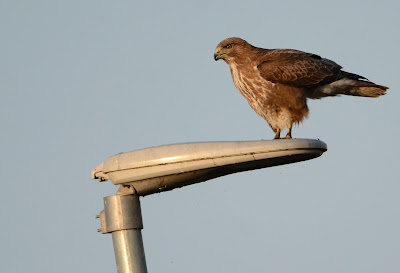 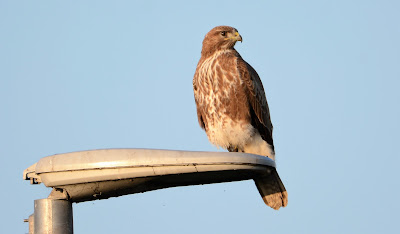 As mentioned previously it’s not beyond the realms of possibility that it could one day breed on site, the site is certainly remote enough for it, I have even earmarked a couple of ideal tall trees that will fit the bill.......

The usual dawn visit resulted in a good morning right from the start, on arrival the female Kestrel was in the nest box. She was looking around for the male so it looks like the box has been accepted for breeding, she will now spend much of her time tied to the box whilst he provides prey.

As it stands she has not laid as yet, the usual average for eggs is late April, unlike peregrines who lay about a month earlier.

However I do wonder with London’s Kestrel’s, will they lay earlier than the norm like London’s Peregrines?


Moving on from here I drove through the Sewage works and came across another Raptor, the resident Common Buzzard which I thought had departed.

It was feeding in the road picking off Earth Worms bought out by the overnight rain, easy pickings for it as I watched it feed.

Got some photos off on a high ISO in the very bad light, not great but ok.
If someone had told me a few years back that a Common Buzzard would spend its winter here at Beckton Sewage works, I would have said you’re off your trolley. Obviously a change in its fortunes, it is becoming more common and established and can compete in an urban environment even with half a dozen Crows giving it grief.

It just ignores them basically, as I have said before the rabbits on site are a massive carrot for this big raptor. 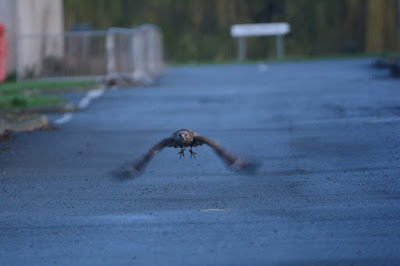 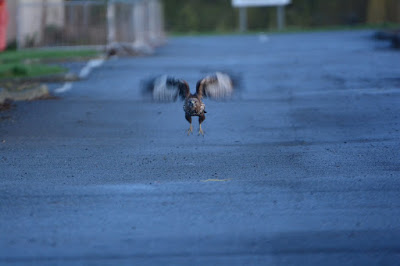 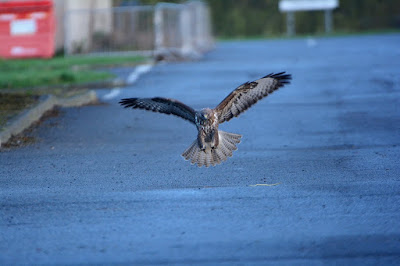 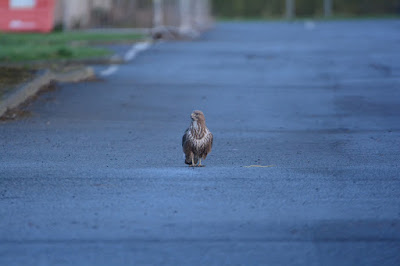 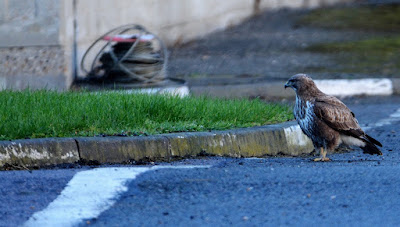 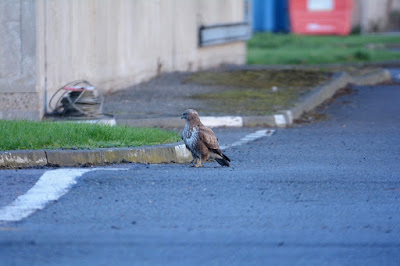 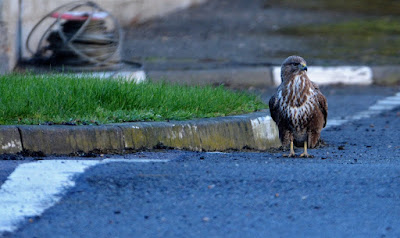 After this I had a look round site watching the skies as usual, low and behold another 2 Common Buzzards went over, at this rate they will be breeding on site soon – one for the future? 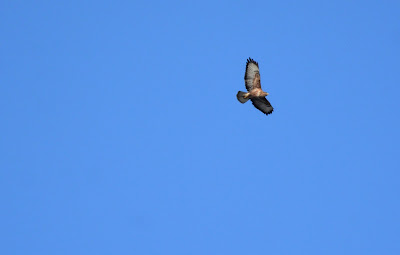 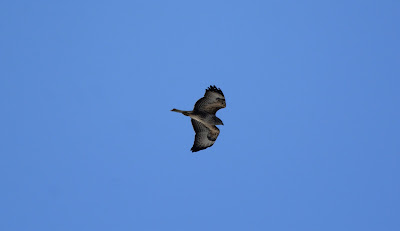 Posted by Dave Morrison at 21:09 No comments: