On the peregrine front it has been an eventful few weeks or so, some of you may be aware of the dead Tiercel that was found in Whitehall on May 7th, a sad event and it turned out that it was ringed.

As the Parliament Tiercel was ringed, I checked as soon as I could and found him absent sadly, however it soon became apparent that another Tiercel was present, although he would not come in to the Falcon. She was not chasing him off but sitting near the nest box, getting excited and giving ledge display, in and out of the nest box every time he appeared.

I had initially thought she was guarding young (later checking the nest box under licence showed it to be empty) this Tiercel also started to display. Watched him for quite a while and a sad event that the resident male has gone, it may be that he will pair with her and bond.

She was obviously encouraging him in and the hope now, is that they will breed late so will have to keep an eye on them going forward.

The corpse of the dead resident male, was initially lost but then recovered from the ringing report, some tracking down by others, a big thanks to them, I was eventually able to send it off to the Predatory Bird Monitoring Scheme for analysis. 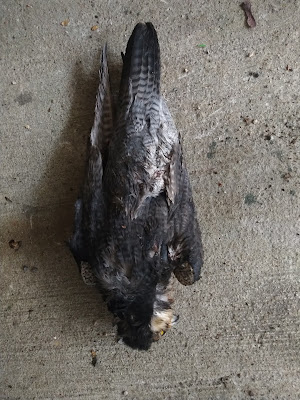 The resident male
One of the first things that comes in your head, the Tiercel had wounds seen from the initial photo, was all this linked to the arrival of this newbie, basically had they clashed and fought and the resident bird come off 2nd best.
Or has this new Tiercel just taken advantage of the absence of the resident Tiercel and is making a play for the Falcon.

There is enough strength in depth in London nowadays with singles waiting in the wings, many sites have their territory ‘checked’ out daily by ‘intruders’ looking for opportunity or testing the strength of the bonded pair.

A very similar scenario has just happened at another site, the resident Tiercel was found dead and immediately another Tiercel was present. However on this site, she has young and initially ignored him first before he got too close to the young and she went for him full on. 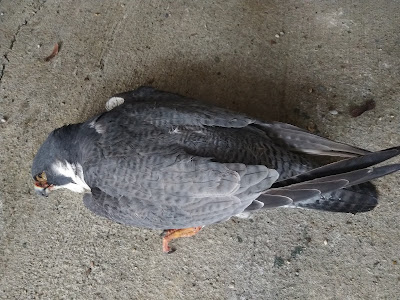 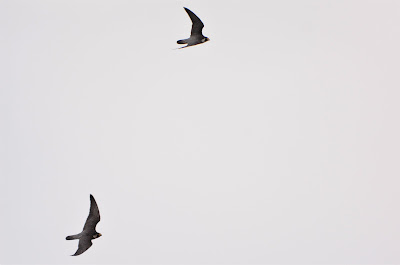 Falcon at other site seeing off another Tiercel
Both birds are now with the PBMS and it will be interesting to see what the cause of death is, both  could also be linked to the very recent high winds and collision, we will see.

Posted by Dave Morrison at 21:52 No comments: