As we know from past juveniles on the site, there will always be dramas, it goes hand in hand with fledging, I think newly named Smokey however is trying to take top spot.

It all started on Wednesday June 10th 7.23a.m, checking the camera I could not locate him, backtracking on the CCTV, showed him unfortunately slipping off the south ledge after overdoing the exercise flaps. From the cameras we could see him heading towards the Power Station flying well.


With everyone looking for him, the site was well covered by MACE personel; however despite this he still could not be located.

He was eventually located in the Waste Transfer Station next door early evening, from photos his position was very low so a massive thanks to Mick Kirwan and his team next door, there is little doubt that he would have been Fox prey during the night. I picked him up at 8.30pm that evening and he spent the night in our front room, Christine has got used to this over the years.

On Thursday morning I took him to the South Essex Wildlife Hospital, as you know they do an incredible job. Given the all clear, I picked him back up on Friday and we released him back onto the roof of the northern accommodation. It was a good release with the Falcon spotting him straight away and reacting well.

With single siblings I never like to leave it too long, there is a risk the longer you leave it, the bond becomes weaker and weaker without other siblings around, after too long, they could possibly see them as intruders and attack them.

A good release, I thought that would be it but unfortunately not, by the evening he had grounded again, I couldn't get back so Mick kindly returned, caught him and put him back on the roof again. A big thanks to Mick/ Security/Clipfine and MACE personel and all those involved in making sure he stayed safe, the site recovery plan worked well, a box placed over him and kept in eyesight all the time.

I checked him on Saturday morning, still on the roof; I know the Falcon fed him on there as well.

On Sunday morning I found him on top of the Thames Tideway Crane, the Falcon took prey and deliberately did not feed him; if he wanted to feed he had to fly to the Nest Box.

A big thanks also go to the Thames Tideway site people for listening to me and keeping an eye on him. 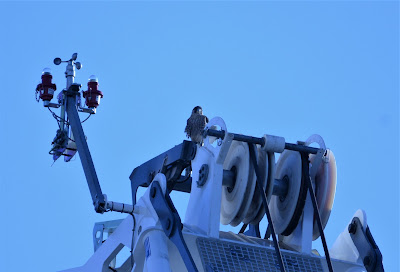 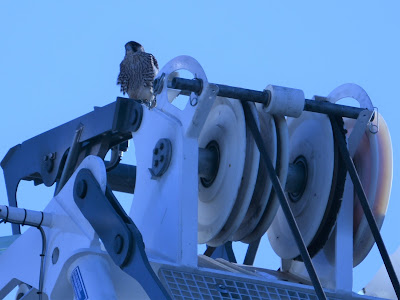 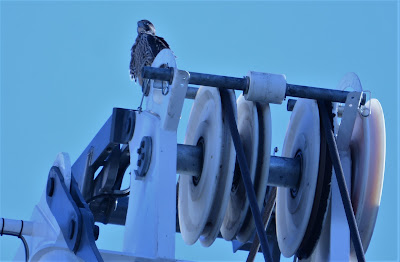 Glad to say that he made touchdown and regained the nest box at 10.07a.m on Sunday 14th, hopefully that will be it, he has spent all of the Sunday on the nest box, no doubt relieved to be back, quite an adventure.