Having now been involved with London’s Peregrines for 15 years and having witnessed unusual patterns, or not the norm, I thought there would be little to surprise me in regard to behaviour.

Despite watching a number of urban pairs in various hunting scenario’s I have never seen a peregrine take a bird head on, it has always been a tail chase or a strike from the side, above or below.

On Sunday September 20th I was watching the pair at Battersea Power Station hunting as per normal, from the chimneys. With ongoing works to all 4 chimneys, the pair, and indeed any of the 4 juveniles have adapted well and still use them to hunt from. Specially placed scaffold tubes have allowed continued use even while they are being demolished.

It is testament to the peregrines character and resilience that they can adapt to habitat/visual changes in close proximity; such is there bond and tie to the Power Station.

During the course of the morning the adults were joined by one of the juveniles, a male and very likely the last of the juveniles still with the adults although they do come and go.
With neither adult as yet having taken any of the many feral pigeons leaving the Power Station south, the juvenile, now fully independent it appeared, settled down to hunt on his own from the southern chimney’s.
2 failed hunts later was quickly followed by a 3rd hunt, he flew past me at speed but instead of latching onto a feral or feral’s leaving, there was none other than a group of 8 heading back into the Power Station from the south.

I did think at the time what had he seen as I dismissed the incoming birds as surely he would not target birds coming back in at speed, I was wrong.
With an impact that made me wince he grabbed one of the birds head on, a flurry of feathers and a couple of grabs and he emerged with the feral.

This was something I have never seen before and is a very dangerous manoeuvre for a peregrine due to the combined speeds of both birds, he did slow himself down which was when I guessed what he was up to.

I have been watching the Battersea pair for many years, obviously it is not the same Falcon and Tiercel, this brings me to the fact, how did he learn this or was it a one off?

He certainly never learnt it from the adults, they have never hunted this way, was it just juvenile exuberance and just a half hearted grab that came off?

I have heard of Peregrines hunting this way in the West Country, if I recall correctly these were adults, as he has not fully fledged I am inclined to think it was a one off.

Sequence of photos below show a Kestrel, at first mobbing an adult Falcon,then being chased by a juvenile peregrine.

Much more maneuverable than the juvenile peregrine, the little Kestrel evaded it quite easy I am pleased to say.
Most of the time it is only interaction between raptors but occasionally it does become a little more serious. 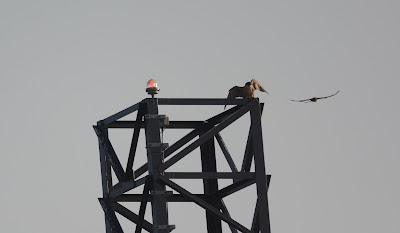 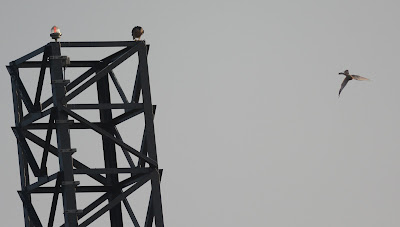 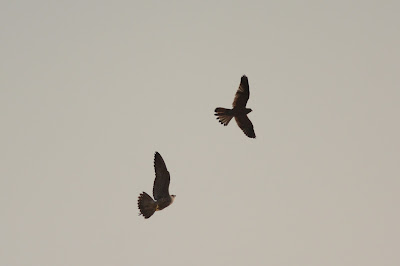 Posted by Dave Morrison at 00:29 No comments:


Having decided to have half a day’s birding with my wife Christine, I had arranged for a guide, Luis Alberto Rodriguez from Birdaytrips, (www.birdaytrip.com) to pick us up from my sister’s apartment in Miraflores, Mijas Costa.

Luis collected us from our apartment at 6.45am in darkness and we headed to Malaga where the Reserve is located, fairly close to Malaga Airport but a coastal site adjoining the Mediterranean.
This was a Reserve I had not been to in previous visits, so I was a little in the dark as to what we were going to see being fairly urbanized on its perimeter. 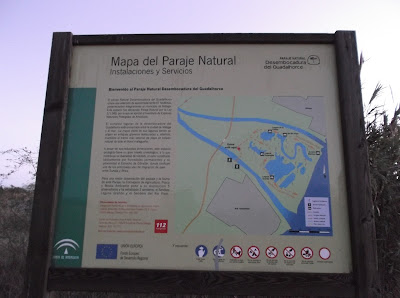 We also connected with some Raptor passage, it’s no secret that is where I get my kicks, so couldn’t have been happier.

Arriving at dawn we searched for the resident Barn Owl but unfortunately drew a blank but another nocturnal bird made an appearance, a Red Necked Nightjar no less. A great start to the morning and if I remember correctly, only the 2nd one I have seen.

By now many species were leaving there roosts in the reed beds, Grey Herons everywhere, the sky was also full of calling Yellow Wagtails and many Hirundines species including good numbers of Red Rumped Swallows.

Moving on we then picked up a Hoopoe and no less than 3 roosting Booted Eagles in some trees, Luis confirmed that some have even been wintering here rather than make the crossing to Africa.

After this many species gave themselves up, Black Winged Stilts, a cracking Little Bittern, White Headed Ducks, 2 lowish Black Kites, 2 Kingfishers, Wood Sandpiper, another 2 Booted Eagles, Little Tern and Zitting Cisticola being the highlights.
Pallid Swift was also regular amongst the Commons and as we arrived near the Sea and saw good numbers of waders, these included Kentish Plover, Ruff, Sanderling, Dunlin, Grey Plover, Little and Ringed Plover and of course the Stilts which seemed to be everywhere. 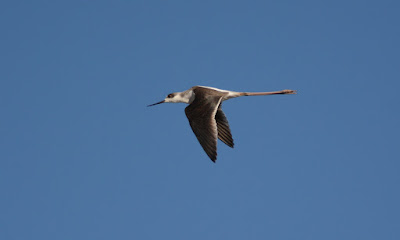 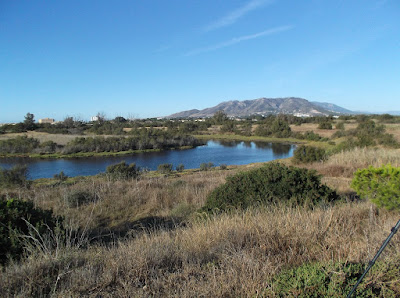 Luis also found a Crested Lark, then Slender Billed and Audouin’s Gull so 2 really good birds that I was pleased to see, we also nailed a Peregrine on one of the distant chimneys.(Always seem to see one wherever I go) 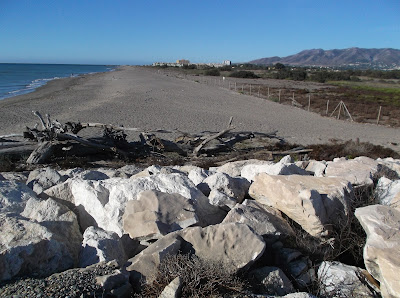 It was about this time when Raptor passage started, I was in my element.

Honey Buzzards first showed in flocks of 20-50, we then started to see smaller sized flocks of Black Kites.
In a 45 minute period I would estimate we saw up to 400 Honey Buzzards, 80 Black Kites and 2 Booted Eagles.
Luis said that they usually pass slightly inland over the mountain chain heading down to Gibraltar/Tarifa to cross to Africa, this morning the wind was pushing them over us thankfully.

It was quite a spectacle in this short period, something which we don’t experience in England on this scale unfortunately. Some of the flocks were dots so I wonder how many we missed/or passed over during the course of the day? 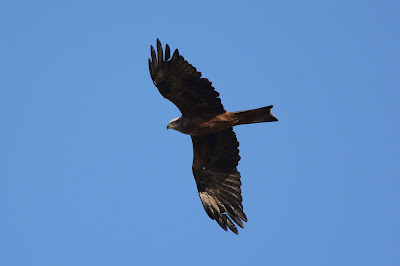 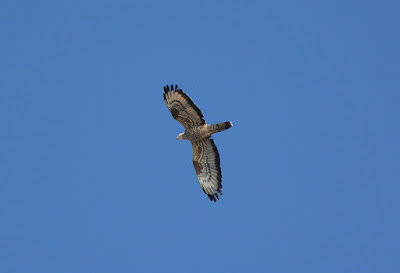 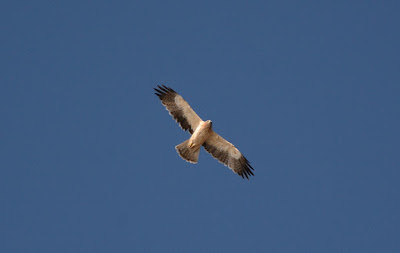 After this we retraced our steps back to another section of the Reserve, awaiting us were 2 adult and 6 sub adult Greater Flamingo’s, more White Headed Ducks, also the heat of the day was really building as we approached mid day. 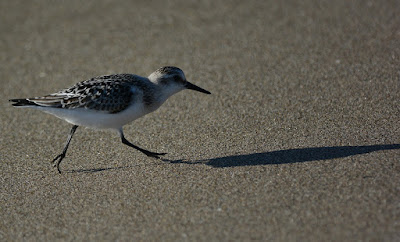 To round the morning off a Purple Heron dropped into the Reserve and landed in some trees, a bit distant but good views were had through the scope.

A fine end to a great morning with 70 species seen, a great guide in Luis Alberto, we will no doubt be visiting again, I wouldn’t mind a crack at photographing those wintering Booted Eagles.


Photos below are from a brief visit to Southend on Thursday,they show Sanderling and Ringed Plover coming in and roosting at high tide. 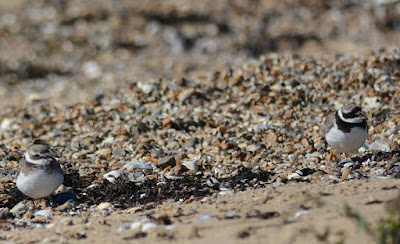 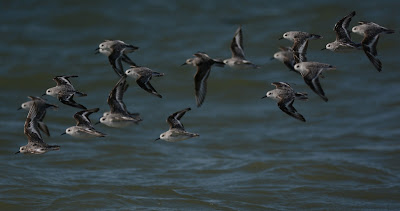 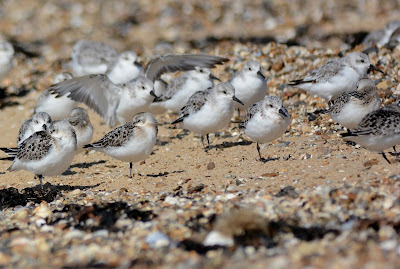 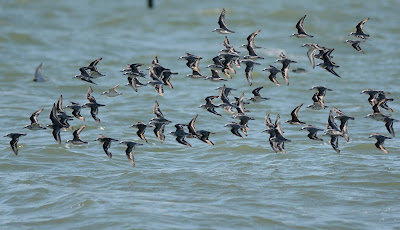 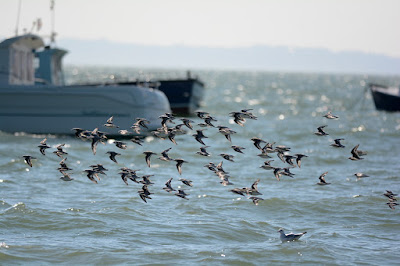 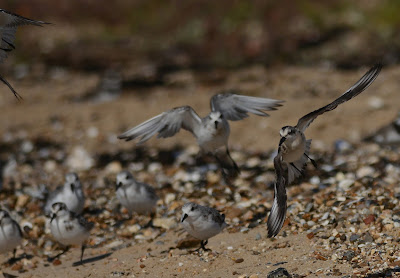 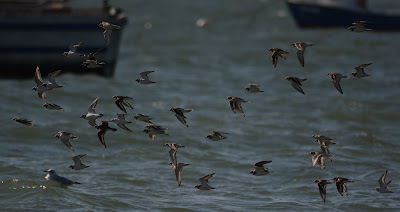 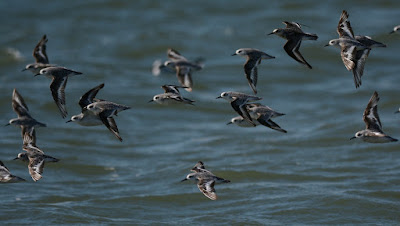 Posted by Dave Morrison at 00:13 No comments: 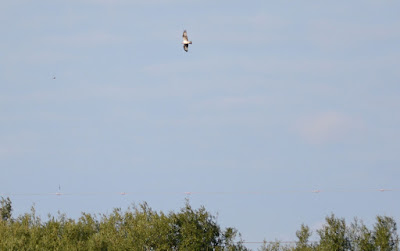 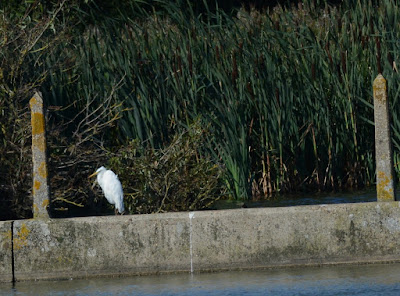 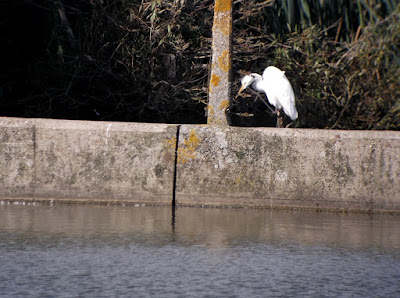 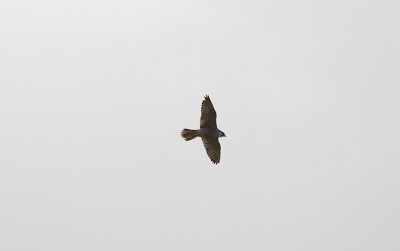 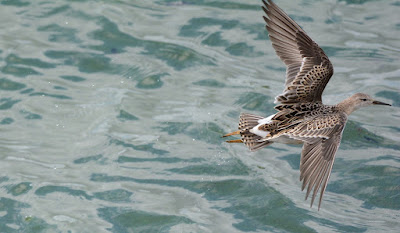 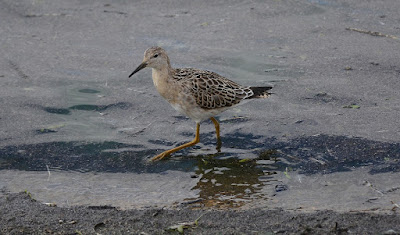 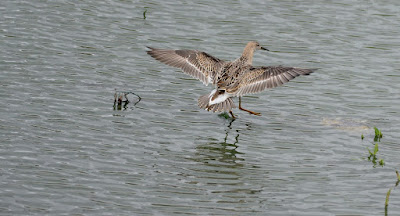 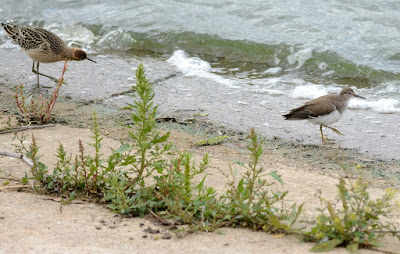 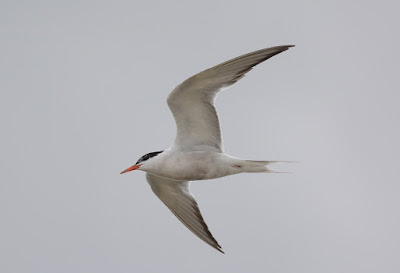 Posted by Dave Morrison at 23:36 No comments: