On Saturday I was surveying, not ideal weather with a very strong south westerly, but none the less I had positioned myself to cover a section of the Thames at high tide.Tucked down out of the wind and well hidden I recorded wader and wildfowl movements along the river.Many waders came out early from roost and were caught out by a very high tide, with no mud to land on they headed for the rocks on the foreshore.Below are some photos taken of a small flock that landed in front of me, not great light but not too bad. 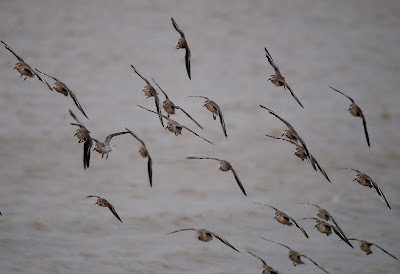 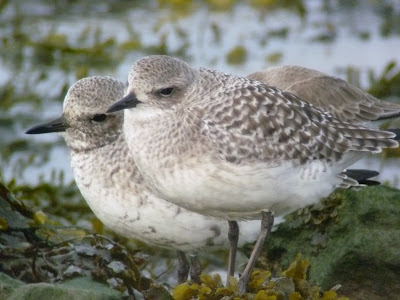 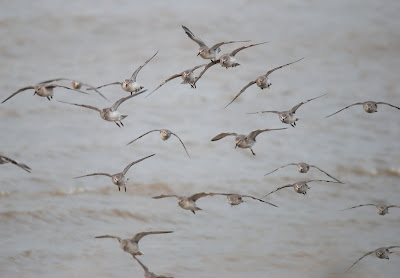 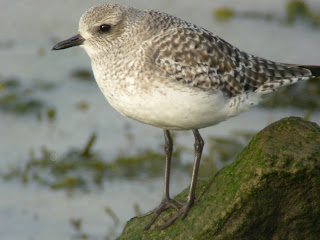 Posted by Dave Morrison at 15:39 No comments:


On November 1st I was lucky enough to find a Richard’s Pipit whilst surveying in Kent, views were only brief as it flew off but hopefully it will get accepted, if not no worries, I am happy that it was one based mainly on shape and call. It was seen whilst surveying in Kent, surveying for birds makes you pick up on any different call which is not your run of the mill species that you expect to encounter, and this was the case with the Pipit.
I wrote up a brief description which is below, the problem, if accepted will likely come from Tawny/Blyth’s, they can give similarish calls at times. I could have said more but I thought this would be glamourizing it, they were only brief views unfortunately.


Whilst undertaking a survey in light rain I flushed a large Pipit roughly from the centre of a flat field. The very first thing it did to confirm the species was to give the House Sparrow call, the previous one seen at Rainham RSPB a few years back did this also. It continued to call until out of sight disappearing east, the time was around 9.40am.Overall impression of the bird was a brown bird with a long tail, larger than a Meadow Pipit and more in comparison to a plump Yellow/Grey Wagtail in shape. The long tail was very obvious and the flight was noted to be undulating, not as pronounced as a Woodpecker, but there none the less, the bill was also noted to be Pipit like and pointed. The bird was watched for about 20 seconds until out of view heading east. Views were not great given the overcast weather and rain, they were only flight views, and the bird was not seen on the ground.
If the bird had not called I would not have in all honesty been confident of identification with Tawny/Blyth’s similar in shape and size but having watched and listened to the one at Rainham RSPB for quite a while, I was happy that this was a Richard’s Pipit.Just a brief description but not a lot you can say really given the views.

Below are some species seen recently on some of the surveys.

Northfleet to the O2

For some time now I have with a lot of help from the Environment Agency, London Wildlife Trust and the PLA been trying to get a boat survey arranged with the sole purpose of locating new high tide roosts, and also to identify any jetties/structures that may be suitable that can be to the benefit of London’s wader population, or indeed any other wildlife. On Monday November 14th I got the chance along with Paul Hawkins with a boat very kindly supplied by the Environment Agency with 2 boatmen, Tom Cousins and Dave Bartlett, despite the atrocious weather (very foggy) it was a success with new roosts located that I would not have found without the boat.
This coming Sunday, the 27th we have the first land based high tide count taking place which will be more accurate than the estimates given from the boat below, you can see that there are already good numbers in the Inner Thames. Thanks go to the birders who are helping out and giving up there times this coming Sunday, hopefully the weather will be a bit kinder than last Monday. The estimated counts below do not include East India Dock Basin roost or Rainham RSPB.

Sites were also noted and photographed, especially old derelict/no longer in use structures that could possibly be an enhancement to local wildlife. The potential for some of these sites is clear in that they could be converted to shingle based, to not only give waders alternative winter roosts if disturbed, but also during the Spring/Summer months they could offer breeding opportunities for specialist species. Common Tern for one, seemingly reducing as a London breeder along with numbers of nesting pairs in the Inner Docks area (E.I.D.Basin) etc…are falling away. The colony opposite Crossness (29 pairs this year) shows that structures on the Thames can be beneficial to this species.
Additionally there is also the possibility of encouraging Oystercatcher, Ringed Plover, possibly Lapwing on the larger jetties and even Little Ringed Plover to breed on these structures. Oystercatchers are under achieving in the Inner Thames as a breeding bird and eggs/young are heavily predated by the larger Gull species. This year it was noted that a pair in Barking were successful due to the fact that they nested on a Common Tern breeding jetty, in doing so they gained the protection of the colony. The Terns are extremely aggressive in the breeding season and will attack any large Gull that threatens the colony, the Oystercatchers were ignored.
The survey was conducted by boat to give maximum coverage to the area referred to above, to be in position at high tide at the Northfleet area we launched at Crossness about 12.30ish.

From Crossness we surveyed the Kent sector heading down river, staying tight to that side checking all structures/jetties right up to Tilbury Docks. At this stage in time many species had already gone to roost as most of the mud was covered, on 2 areas with high mud levels large flocks were seen feeding frantically before going to roost. 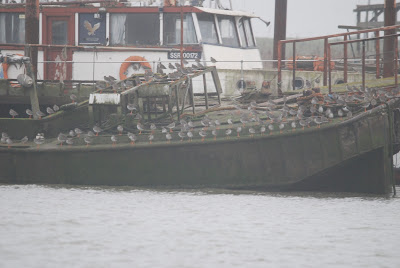 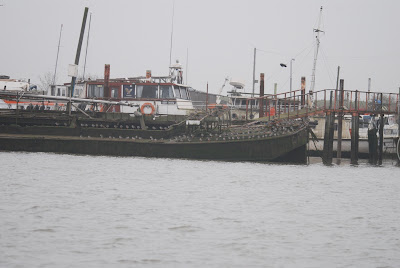 From Tilbury Docks we kept tight to the Essex side checking the known roosts and looking for new ones also. We continued right up to the 02 before crossing to the Kent side again and then headed back to Crossness.
The most suitable mud and feeding areas for London’s wading birds has always been from West Thurrock Marshes up to Barking Outfall, consequently nearly all high tide roosts are congregated within this corridor. These areas offer large sections of exposed mud, at low tide this gives them a buffer zone from disturbance and the security they need to feed naturally. From Barking Outfall upwards there are no jetty/structures offering suitable secure roost sites, the colony of Redshank at East India Dock Basin use the Creek as a roost.

At the other end of the survey, downriver, the Tilbury Docks area as expected was very busy offering little in the way of roost sites, both sides of the river were checked and the results were negative. There could likely be a roost further down river past the docks but this would likely take it out of the LNHS recording area.
One area where I thought there may be a substantial roost was Greenhithe at Broadness Point, an undisturbed rural area, this never materialised and the next roost up river was at Stone Point.

One of the main objects of the survey was to locate any new roosts within the LNHS recording area, this was realised with the discovery of 3 new roosts, one at Erith Yacht Club, one outside Littlebrook Power Station and another just past the Dartford Bridge at Crossways. It has to be said that all 3 would have likely gone undetected but for the use of the boat as all are on wide stretches of the river on the Kent side.

Both I and Paul undertook estimated counts on each roost site that we encountered the name of the sites and the species involved are listed below. Next Sunday’s counts will be far more accurate, one reason is that on many estimated counts we were well below the jetty/structure at river level.

As you can see quite impressive totals this early in the winter given how mild it is, and the fact that there has been no cold weather movement as yet from Canvey and Coalhouse etc…

A very enjoyable experience and some stunning views. 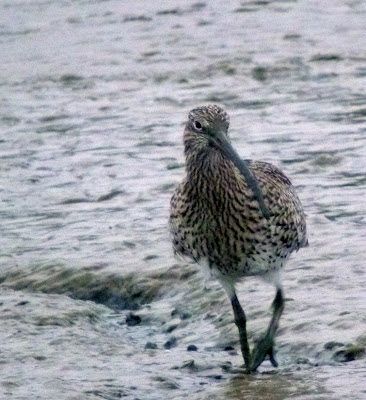 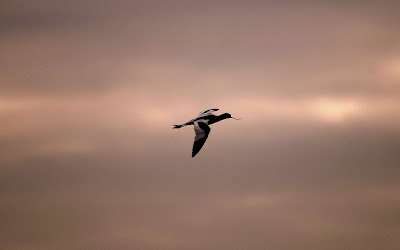 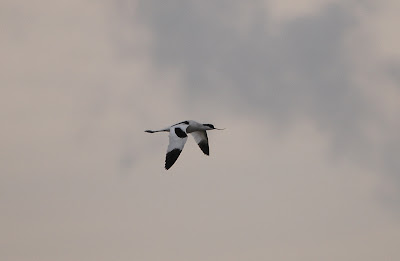 Posted by Dave Morrison at 11:29 No comments: