Spain, Costa Blanca, Alicante and Murcia areas May 12 to 16th

I am very fortunate to have aunts and uncles living in Spain, namely the southern La Manga area and the others are further up east in the Valencia region. This year I was lucky enough to be able to visit my uncle Bill in Los Balones, his villa is on the fringe of a mountain region, just outside La Manga. The views are spectacular, mountains on one side , the Parque Natural de Calblanque,the opposite side gives you views over the ‘inland sea’ of Mar Menor.


I flew from Stanstead to Murcia with Ryanair at a cost of £78.00, flight time was 2 hours 15 minutes, I have now flown with them a number of times and personally I think you get good value for money, bit of a free for all getting your hand luggage in but at £78.00 I was not complaining.

I would also like to say a big thank you to Richard Howard who took me to some sites on the 14th and 15th, he knows my uncle, without his help and local knowledge, I would not have seen half the ‘speciality’ species.

Friday May 13th
Dawn found me walking the lower mountains outside the villa, as the light came up many species started singing. Serin seemed to be everywhere and the calls of Thekla and Crested Lark soon joined the chorus, unusual sight of the morning was a Little Owl hovering over grass, never seen this before.

It soon became apparent that Fan Tailed and Sardinian Warbler were pretty common as I saw them everywhere, also heard Green Woodpecker.

Other species seen were-

From here I headed out to explore the coast of the Mar Menor, 1st stop was an area of flat sand which is popular with the Kite Surfers, I arrived pretty early so not too many about. It is located around 2k further on from the village of Los Nietos as you head up the coast towards San Javier. As I arrived there was a very large flock of Yellow Legged Gulls resting up near a large pool of water, very shallow which obviously suited the birds present.

Time was flying by and could have stayed there for hours photographing but moved on up the coast, next stop was the very large working salt lake next to Torremendo, very hard to cover, many tracks lead to it but hard to get close. I went around this for about 3 hours covering probably 50% of it, best bird by far was a male Montagu’s Harrier, stunning. Other notable species seen or heard were Nightingale, every Orange or Lemon Grove seemed to hold one, Turtle Doves were numerous, always good to see. By now it was late afternoon so headed for home, very hot and heat haze everywhere, a beer was calling.

The plains of Guadalentin


I arranged to meet Richard at 7.30 and in little over an hour, we were on the plains in good weather. I have to say that this was one of the best days birding I have ever had, the list of species seen, and numbers, especially of scarce species, was staggering. There simply is no substitute for local knowledge, thanks again to Richard. During the course of the day we covered miles, sometimes on decent roads, but more often than not, on a farm track, it was great birding, you simply did not know what was round the corner. Using the car as a hide also gave us very good views of the specialist Larks, namely Short Toed, Lesser Short Toed and Calandra, additionally we both got some great shots.

This trip also provided also produced 3 lifers for me, Lesser Short Toed Lark, Rufous Bush Chat and best of all, Roller. Along with the ever present Bee Eaters, Rollers were spectacularly colourful, I have waited a long time to see one of these, well worth the wait.

Raptor of the day went to a pale phase Booted Eagle that gave good views.

Below is a list of just some of the species that we saw.

Roller - a minimum of 8 seen

Spectacled Warbler – 12 seen, a majority of these were singing males

We did not catch up with any Sand Grouse, it just provides a great reason to go back. 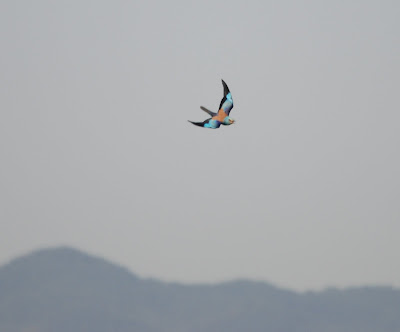 From here we headed for a small lake on the edge of a mountain range called La Charca de Las Moreras, this provided great views of a pair of Great Spotted Cuckoos along with at least 10 White Headed Duck. The drakes really are cracking looking ducks, also present were numerous Great Reed Warbler, Red Rumped Swallow, Purple Gallinule, 3 Bee Eaters, 2 Cattle Egrets and a Hoopoe. 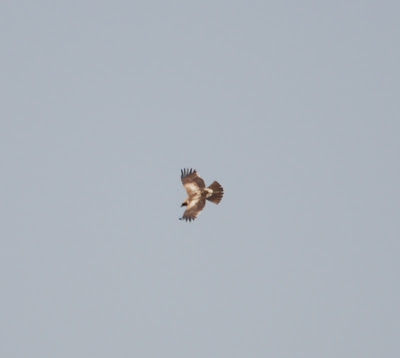 To end the day we visited another site, a pair of Black Wheatears greeted us on arrival, I never realised that they are quite confiding, behaving just like garden Robins, not sure if this is normal behaviour but certainly appreciated to end a great day.

El Hondo
I picked Richard up from Los Belones at 6.30am and we headed up the motorway towards Alicante passing Torrevieja and then heading for Dolores, El Hondo is sign posted from then on. The sign posts actually read ‘ El Fondo’.

The reserve is very big, made up of 2 reservoirs bordered by extensive reed beds, in total around 1100 hectares. The site in winter holds good numbers of the larger birds of prey, last winter they recorded up to 5 or 6 Greater Spotted Eagles, one of which I understand has a tracker.

On arrival at the car park and visitor centre, it is very modern looking, we looked on an adjoining farmers field and had 3 Audouin’s and around 10 Mediterranean Gulls, whilst scanning we heard a very unusual call. First thoughts for me were perhaps a Crake, later seen, it turned out to be a Southern Grey Shrike, I would never have connected the call to a Shrike, having said that, I heard a Woodchat Shrike singing also, some of it sounded Finchy. You never stop learning.

As we entered the reserve, it was still quite early, the mossies massed and made a bee line for the fresh meat, got a few bites before we could get the repellent on, they are persistent little buggers.

As we walked towards the hide we picked up our 1st Heron, a Purple, shortly after this they all started to appear, Squacco was next with a bird giving good views on a flyby.

I then got onto 2 ducks flying at distance, initial thought was Gadwall, and I then got the head pattern and wing bar, Marbled Teal, a lifer. We later got good views of these and ended up seeing 2 pair. We reached the hide and the birds on show were spectacular, double figure counts of Black Necked Grebes all in there summer plume finery, Whiskered Terns up and down, Collared Pratincoles hawking and White Headed Ducks right in front of us.


I had a brief view of a female Little Bittern behind me before Richard located a male that had climbed up on to a reed stem, between us we probably took over a 100 photo’s of this little cracker.Red Crested Pochard probably numbered over 50 and we also had 2 Purple Gallinules.

Species of note seen were

We spent a good few hours in the hide, it was hard to go and leave such a display but we decided to visit another part of the reserve, this turned out to be the move of the day.

On pulling up we got onto a male Montagu’s Harrier giving good views over a reed bed, a stunning looking bird, as we watched another came up and joined it, then another and so on..... 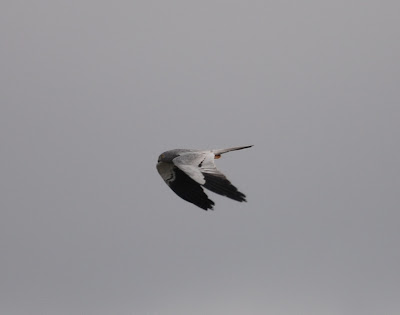 In the end there were 5 males up and a ringtail, as quickly as they showed they all disappeared again, in the next hour we had some good views of a male hunting and calling, I also managed to get a couple of shots of him.

This area also produced 3 Rollers nearby, one of these mobbed a male Monty, too far away too photograph but a very persistent individual, it was quite a sight.

Moustached Warbler was also heard briefly but simply too much thick cover to view.

This is not very far from El Hondo, it is a series of man made large pools and hosts large numbers of breeding Avocet, Black Winged Stilt, Common, Sandwich and Little Tern and a very large colony of Slender Billed Gulls. I would say the colony of Slender Bills is probably around the 250 mark, they are simply everywhere. 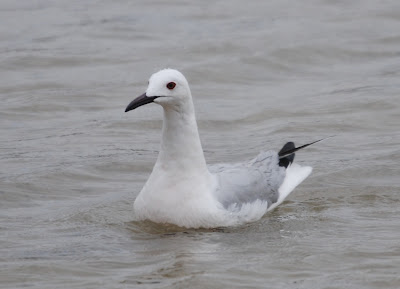 Would have like to have stayed longer hear but we were pressed for time and called it a day.

I did not think much could match Guadalentin but the birds seen at El Hondo, especially the male Montagu’s Harriers did so.

Last morning before flying home so I did a dawn stint from the rooftop for around 2 hours.

Birds of note seen were

Peregrine –Tiercel climbing for all his worth, obviously on to something higher up

Alpine Swift – 3 in amongst the Swifts and Red Rumps

Stone Curlew – flight calling at dawn, took me a while to suss out what it was before I saw it.


Summing up, I saw some great birds all within a 60- 80 minutes drive away, I plan to go again, especially at migration time, I think it could possibly be good for Raptors moving down the coast towards Gibraltar, only one way to find out.....