Barking Outfall probably hosts the largest Herring and Lesser Black Backed Gull colony in London, past counts have well exceeded 50 of each incubating, with Lesser being the predominant breeder. The colony is centred on a disused jetty and a number of free standing Victorian pillars.


Last weekend, whilst watching the river, I was also keeping an eye on the colony, many are already incubating with others back and forth to terra firma to gather moss and grass. If anyone has visited a large Gull, or even a small Gull colony it is pandemonium, noise, fights and protecting your square of ‘turf’ is the norm.

As I was watching I also noticed an adult Great Black Backed Gull towards the very end of the jetty, all the others, naturally were giving him or her space, any that came to close were seen off. Definite territorial behavior so I made a mental note to keep an eye on him/her.

I visited the site again this morning and amongst all the chaos I got a glimpse of a Great Black Backed Gull carrying some moss and disappearing around the back of the jetty. On this evidence it may be that they intend to breed, it certainly looks this way, this or another GBBG appeared shortly after and ‘layed ‘ up. 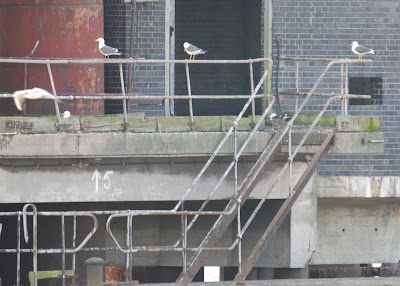 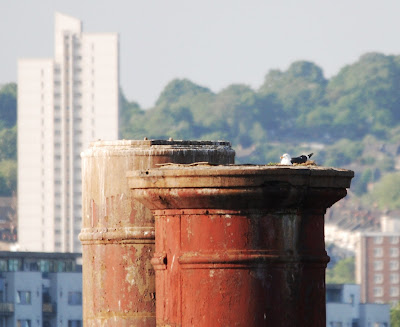 In 2010, at Barking Bay, myself and Paul were both dived at by an adult GBBG calling and showing aggression, this bird came straight from another Jetty, possibly a breeding adult protecting eggs/young, or a fledged juvenile.

It would be good to record breeding for the London area, BWP gives there breeding range far away, higher up the east coast and the West Country if I remember correctly.

Photo’s were taken on May 4th,this morning I recorded 38 incubating Herring and 61 incubating Lesser Black Backed Gulls, as mentioned earlier, many are still building and I can only see, say 60% of the jetty and pillars.