The 2016 breeding season was always going to be a challenge to the Peregrines, works have now begun in earnest on the Power Station itself and the skyline had dramatically changed with ongoing construction, new buildings, chimney demolition and Luffer Cranes.

With 3 successful seasons behind them due to our new female’s arrival in the winter of 2012/2013, 2016 heralded another new breeding season, the pair as ever took it all in their stride.

Would the works and the ever changing site perhaps send them off looking for pastures new?
It did occur to me many times, but the site faithfulness of the pair again reasserted itself and they laid their first egg on March 15th.

This year Battersea Power Station Development Company had installed CCTV, no less than 4 cameras watching their every move. It gave me a comprehensive insight to study the species even further, along with providing incredible live footage and images.
In total she laid 5 eggs with the last being laid on March 24th, this was also my first clutch of 5 in London. Laying durations between eggs were very consistent, 53 hours between eggs 1 to 4 and 55 hours between eggs 4 to 5.

The 5 eggs did create a problem for the Tiercel, his smaller size occasionally leading to one egg not being covered, sometimes for long periods in relatively cold weather.
This may have been a contributing factor in only 4 of the 5 eggs hatching, the first hatched on April 26th with the 4th hatching on April 30th.

On a diet of meat they quickly grew and all fledged in early June, one however did it the hard way and grounded on his first flight.
A Falcon Recovery Plan was in place particularly for this sort of occurrence; he was thankfully seen and located, placed in a box and then taken to a special safe area high up on the Power Station.

Battersea Power Station Development Company and construction contractor Skanska had set aside this non disturbance area on the Power Station specifically which I knew the adult peregrines used, it worked a treat and he was fed by the Falcon the same day.

Before long he joined his siblings, who also fledged shortly after, gracing the skies in and around the Power Station, by the end of the week all 4 had made it to the summit of the brand new south western chimney.

To have 4 screaming juveniles chasing an adult with prey around the Power Station construction site is truly a remarkable spectacle, obviously it has not gone unnoticed by the 3000+ workforce.

If you know peregrines, you will know how loud juveniles are when they are hungry; on occasions they even drowned out the noise of the site.
Many of the workforce have often stopped me to discuss the birds and get the latest, even on a major construction site there is a place for nature and it is good to see people taking an interest. 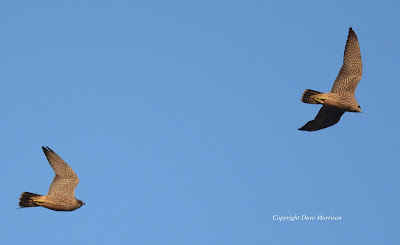 To date the 4 juveniles are spending more and more time away from site exploring and presumably hunting the adults territory, similar to teenagers they only return when they are hungry.

Pretty shortly I suspect the male juvenile will leave site, probably in September and then his 3 sisters will do the same, not long after him. Having said that, there is always one young one, as we’ve seen last year and in 2014, who takes a little longer to make their move.