Now more or less into spring, thoughts now turn to breeding for a lot of species, some have already started on site and the pair of Kestrels are looking like they are going to breed again shortly.

The female is staying very close to the nest box so hopefully they may lay soon, the books say mid April but on behaviour I would say it will be this month, suspect like Peregrines they are likely earlier down ‘south’.


Another species that is breeding on site is Ring Necked Parakeet, they have taken over an old Green Woodpecker hole and are breeding inside, they are quite aggressive as well.

An introduced species, the story goes back to the African Queen with Bogart and Hepburn, apparently lots escaped and they colonised from that, possibly myth but you never know.

Unfortunately they take nest holes from both Green and Great Spotted Woodpecker, Blue, Great, Coal Tit along with Nuthatch and Starling, all native species so not good, they divide opinion but the fact that they are here is not good for native species.


Elsewhere the pair of Common Buzzards are still very active, one particularly so which looks like the male being smaller, as yet I have not seen them in any of the Crow nests but hopefully they will soon.
Goldcrests are on site, 2 pair in their respective Fir trees and are singing already as are Chiffchaffs, Cetti’s Warblers seem to be all over the site.
Posted by Dave Morrison at 22:27 No comments:


Quite an eventful visit last Sunday, great weather for a change and thankfully the recent high winds had reduced making it a very pleasant morning.

As soon as he leaves the protection of the Tower the adult Tiercel appears and is on him, this happened at least 5 times during the course of Sunday morning; the adult when not drifting around aloft spends his time east sitting on buildings on Riverlight and beyond.

I did not see him alight anywhere on Battersea Power Estate, certainly not on the Tower otherwise I would have seen him on the CCTV also, it’s an unusual scenario.

Lots of permutations here as I see it.

1. Is the immatures presence now stopping the Falcon fully bonding and breeding with the new chap?

2. We know that copulation has taken place with the adult Tiercel, will she still allow the immature to stay even if she lays?

3. If she does lay eggs/young who will incubate/feed young when she is off feeding herself - Adult or immature Tiercel if the adult cannot move him on.

Different scenario's, it boils down to the fact that the adult Tiercel, given what I saw on Sunday, has to displace the immature to bond properly. I am hoping that the immature will just go really, he is putting up a fight that much is obvious, however the adult Tiercel certainly seems faster and likely stronger, it’s possible that he will come off second best and he could likely be injured or worse.

Posted by Dave Morrison at 00:56 No comments:

Quite an eventful weekend just gone starting off with Parliament on Saturday at dawn, positioning myself in Victoria Gardens Park I awaited the Falcon to emerge from the Palace from one of the many niches/ grotesques.

After an hour and no sign of her I hobbled to the edge of the park (knee op last week) and looked across at the Abbey, lo and behold there she was on prey with a Tiercel next to her!

Obviously it made my morning and I couldn’t have been more pleased, it likely means that breeding may well now go ahead on Victoria Palace.

I got a few distant shots of them both for reference, I was surmising that it was a new Tiercel after not seeing the resident Tiercel for a few months and thinking he was no longer present.
Checking the photos later, although fairly distant and not detailed I could see no difference to the old Tiercel; better photos will be more conclusive, hopefully this weekend. 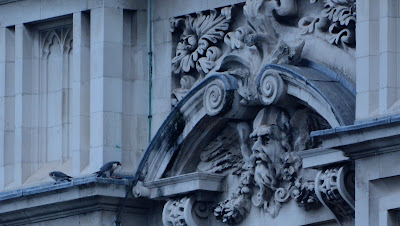 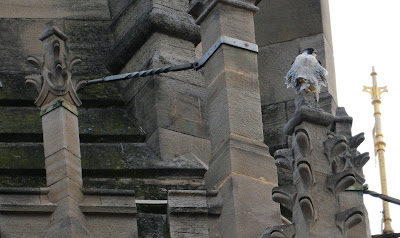 Whether it is a new Tiercel or not, I must admit that I thought he had gone given the time I had put in and the visits, others as well whom I keep in contact with had only seen the Falcon. I was contacted by a chap on Twitter who mentioned that he had seen the Tiercel fairly regularly, great news and well done to him, hands up it looks like I was wrong about him being missing.

Hopefully breeding will now be a foregone conclusion so looking forward to Fridays visit when hopefully I can get some decent photos of him – weather permitting if I don’t get blown away....

Another dawn visit on Sunday, albeit in exceptionally strong winds, the prelude to the approaching storm we are now experiencing now, not surprisingly not one of the Luffer Cranes was working.

I soon located the Falcon and then consequently the immature not far behind her as they located to the Tower resting up for around 30 minutes, neither bird hunting.
However this was soon to change when I soon heard the Falcon’s agitated call, looking up to see the cause of the stress showed another Peregrine, quite obviously an adult Tiercel as he began to display.

It’s been a long time since I have seen an adult Tiercel display, the pairs that I monitor are mostly long bonded and there is little display it seems if they have a settled bond and are paired and territorial all year round.
For around 5 minutes he showed off his flying abilities, vertical stoops, casting up, down, power flying at breathtaking speeds, using the wind it was the most incredible display I have seen bar none.

I was impressed, she was obviously as she went up and joined him, you may ask what the immature did, he obviously stressed called but remained on the Tower as both adults were eventually lost to view as they went further and further up towards the heavens.

Checking the rest of the site for birds, 3 Grey Wagtails were already showing breeding behaviour along the river wall and the House Sparrow colony numbered 15 birds at roost in the Buddleia, I eventually left site.
As I exited, I spared a thought for the immature still sitting on the Tower, going on this morning’s activities it was likely that his world was about to change, or so I thought.

After arriving back home I consequently checked the CCTV and lo and behold, there was the Falcon again feeding the immature after the morning visit and also later again in the afternoon. 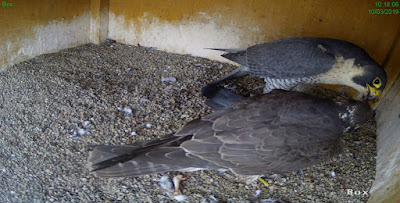 A very odd scenario given the morning’s reaction to the new adult Tiercel, could it be that she could well bond with the new Tiercel but continue to nurture the immature going forward?

If so a very unusual event, especially if the Tiercel is accepted by the Falcon, I would not have thought that an incoming new Tiercel would accept the presence of the immature unless the immature retains the protection from the Falcon?

It seems quite a complex early relationship it seems as I was contacted over the weekend to say that the new Tiercel was seen copulating with the Falcon on Saturday, so signs look good for breeding it seems.

Early days and hopefully pointing towards successful breeding, we will see. 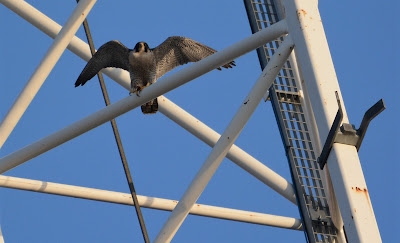