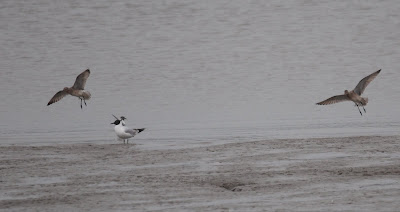 Posted by Dave Morrison at 07:40 No comments:

The Valley and Barking Bay

Walked over to the Ingrebourne at dawn looking and listening for Tawny Owls, again no luck, very hard to understand why they are so elusive and hard to find. Elsewhere at other sites, especially the London sites, they are on show much more, adults as well as young. One possible reason may well be that there is simply so much more habitat and thick cover available that they cant be located due to this, probably a good thing in the long run. Of the whole Valley, I would say that 40% of it is totally wild and out of bounds to the public , one day I suspect it will be turned into a Nature Reserve.

Back to the walk, as I headed down past St.Georges Hospital, a male Ring Ouzel flew up from the path. Landed briefly in a low tree and then disappeared towards Deadmans Wood, never to be seen again. The light was not good as it was only 5.45am, so could not get a ‘ lock ‘ on it with the camera.

A good addition to the site list and way overdue, for some reason they never hang around in the Valley, as with previous Ring Ouzels this performed true to form and disappeared.

Additional sightings of note from the course of the morning were 14 House Martins, Grasshopper Warbler, 3 Yellowhammer, Common Tern, Common Snipe, 6 Lesser Whitethroats and god knows how many Common Whitethroats, certainly 40+.

The viewing area is looking good and drying up just right to pull in a rarer wader, If I remember correctly Les Harrisons Pectoral Sandpiper was the best one.

Tried to locate Pauls spring Whinchat seen the afternoon before, and also hoped I might get lucky with the recently seen Corn bunting. No luck with either but was compensated by a calling Greenshank mid river looking for some mud at high tide, and best of all a calling Tree Pipit over head.

I was unable to relocate the Tree Pipit despite seeing the area in which it landed, the little bugger just vanished in thick cover.


A Cuckoo was also present along with a single Lesser Whitethroat. Wheatear numbers have multiplied with groups of 7 and 4 seen in different areas at the same time.3 Swallows were also seen along with a showy Ringed Plover.

Posted by Dave Morrison at 11:54 No comments: 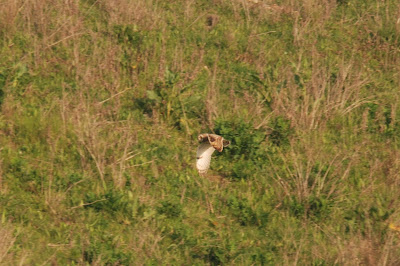 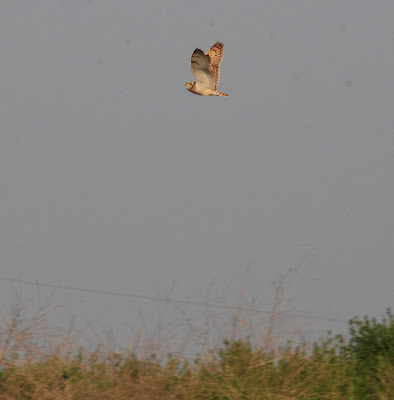 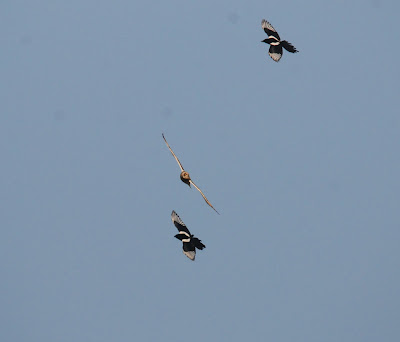 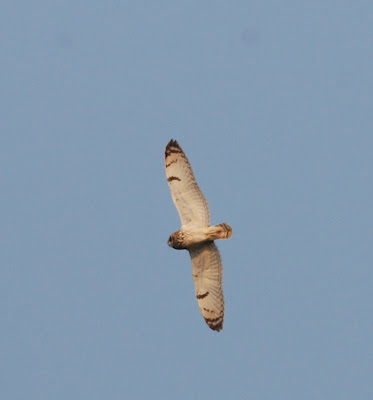 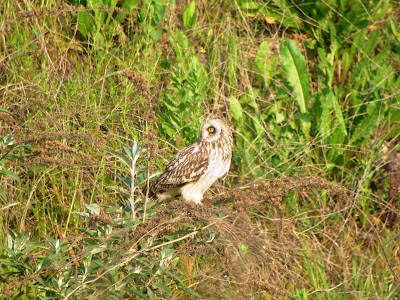 Posted by Dave Morrison at 09:43 No comments:

A really good weekend with great weather, certainly seems the warmest April that I can remember, and, hardly a sniff of any rain. Many migrants seem to have arrived earlier, I also expect this is weather related.

Reed Warbler have started to appear in numbers with 6 singing birds, also a single Common Tern working the Outfall, 4 Oystercatchers still disputing territory and nesting rights on the large jetty.

The 1st Sedge Warbler was a site tick, in the past it has been a hard bird to nail on site, additionally, despite tripping up over Wheatears just about every where I go, I have managed to miss them here so far.

Checking out the Gull colony showed at least 7 Herring Gulls already incubating, was not aware that they were earlier breeders than Lesser Black Backed, the Lessers are still bringing in moss and grass. The usual pandemonium occurred when they saw me, when the 1st alarm call went up, they all piped up, incredible noise from over 150 Gulls. Bearing in mind I am over a 100 metres away on the river wall, they are quite aggressive, I was even mock dived and the majority have not even laid eggs yet.

4 Summer plumed Dunlin were present in the Bay and pairs of Shelduck seemed to be everywhere investigating rabbit holes. The Bay and Crossness seems to always hold good numbers of Oystercatchers with 4 pairs seen including one pair already incubating.

Virtually the 1st birds seen were a group of 7 Wheatears, 1 adult male and the remaining were immature and female types.

On the Butterfly front, Small Whites were out in force with a minimum of 40 seen,1 Green Veined White and 2 Small Tortoiseshells were also noted. I have seen more Small Tortoiseshells in April than the whole of 2010 combined, hopefully they have recovered from the last few lean years, again, much of this has got to be down to the weather. (Click on photo's too enlarge)


The Common Tern Jetty that housed 22 pairs in 2010 is starting to take off with around 25 birds already present, some have got in early and claimed a spot. The usual noisy Tern colony is starting to take shape, one by one the resting Black Headed Gulls are being made unwelcome and eased off.

An excellent morning made even better with 3 additions to the patch list, firstly a Cuckoo seen and heard for most of the morning, presumably it is the same one moving around.


Best of the lot though was a Red Kite picked up going south west, around 12.10pm, having spoken to Shaun, he also had one later in the afternoon. His bird had no wing moult, the one I saw did. All in all a very good day, other highlights were Grasshopper Warbler, Swallow, 3 Sand Martins, 10 Common Whitethroats, 4 Lesser Whitethroats and a pair of Ring Necked Parakeets nest site prospecting. 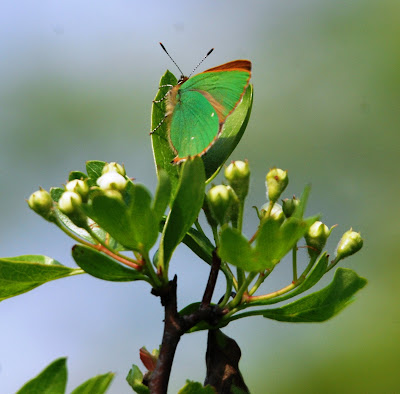 Posted by Dave Morrison at 09:53 No comments: 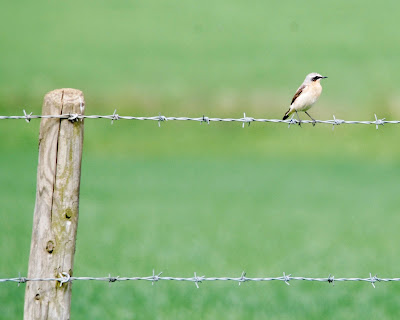 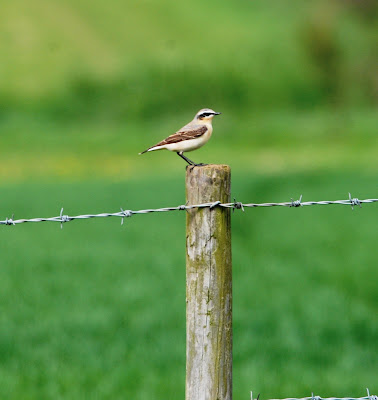 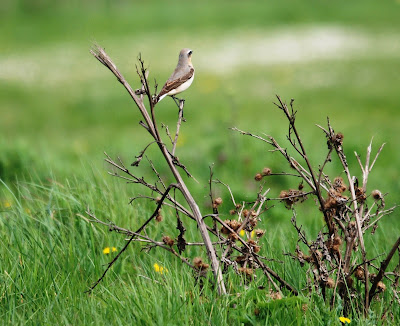 Posted by Dave Morrison at 12:55 No comments: 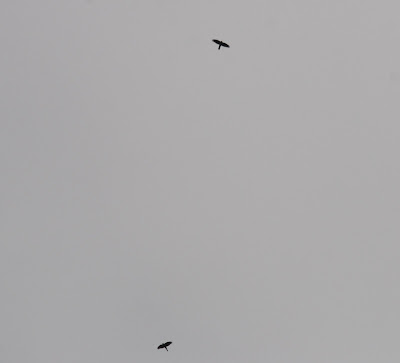 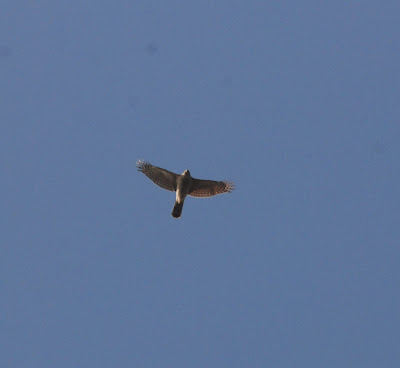 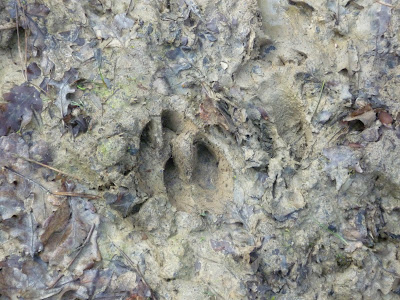 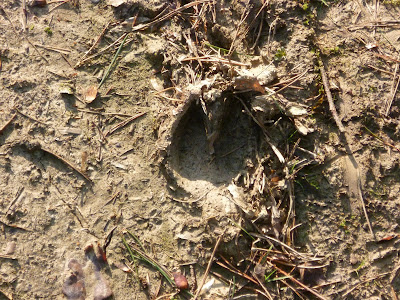 Posted by Dave Morrison at 09:40 No comments: