Age it seems has finally caught up with the long serving Falcon and sadly the 2 eggs laid on March 30th and April 9th, failed to hatch being infertile, however it was not for want of trying.

As you know she is on camera up a purpose built 55-meter tower, incubation continued for a marathon 86+ days on the Falcons part and slightly longer on the Tiercels part. The norm being 29 – 36 days incubation to hatching, above was way over and shows the pairs commitment to incubation and breeding. A good distance in, I made enquiries to see if the eggs could be removed under licence, one of the reasons being to let them get back to a more normal life. Extended incubation would also mean a loss of condition, especially to the Falcon who undertakes the Lion’s share, hence the enquiries, however the consensus was from the powers that be, was that they had to stop naturally.

Thankfully they did stop eventually, and they have now returned to normality, a pity regarding the eggs but we know she is around 12 having arrived as a ringed adult in the winter of 2012.

Also with the incubation finally stopping, we were able to remove the 2 eggs under licence and these were then sent to the Predatory Birds Monitoring Scheme for analysis.


I know I am biased, but they are quite an incredible resilient species who seem to adapt to just about anything, since 2013 the Power Station has been a major construction site, not only did they adapt, but they adjusted, thrived and bred. Indeed, the construction period of breeding from 2013 to date has been there most successful.

Since construction began in 2013, they have fledged an incredible 22 juveniles amid a full-blown major construction site, at its height boasting 21 Luffer Cranes, every one of these Cranes was used by the Peregrines. Even when they were working and a peregrine was hunting from the top, they often stayed on board for the ride, adjusting position as the Crane traversed/jibbed to make sure they were facing in the right direction. Very amusing and it always put a smile on my face. 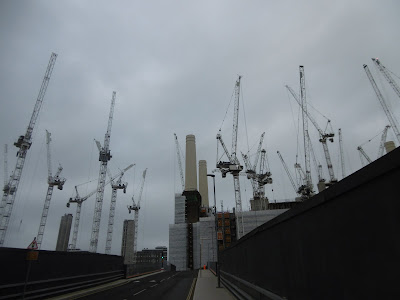 The dot on the centre chimney is one of them hunting 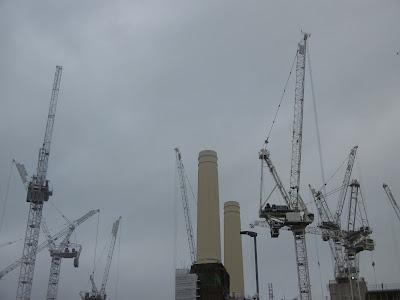 The purpose-built Tower was erected in 2013 as mitigation to maintain their presence on site, it has been an incredible success and with all the works progressing, it also shows just how strong and powerful the bond to the ‘core’ nest site is.
Over the 22 years I have been monitoring them at Battersea Power Station, this pair above all and, this Falcon, have provided me with so much information/knowledge regarding urban breeding peregrines. CCTV gives you an incredible insight into their world, one thing that came to light in the early days of the camera, just how much she liked to rest up and sleep, often 5+ hours in the afternoon flat out!

As mitigation for the very successful Tower and to make sure they stayed at the Power Station for the future, a new permanent nest site was designed for them a few years back in the northeast wash tower, this was put together by Battersea Power Station Development Company, Wilkinson Eyre, Mace and myself.

This went live this year, and I was hoping that they, more specifically the Falcon, would likely show an interest/activity as 2023 breeding approached. In the bird of prey world, most females are bigger and wear the trousers being dominant over the males, for it to be accepted, it was down to her.

Released from long term incubation, they obviously became more active, it was then I started seeing an increase in activity on the motion tracker at the new nest site.

I had seen a Feral Pigeon on the landing ledge of the new site occasionally, so wondered if it was this, however when I next looked from the park there was pigeon prey on the ledge!

On checking the camera, remarkably it was the Falcon, not only was she inside the box, but she had also made a very early scrape and was spending a good number of hours sleeping/resting inside. The pigeon may well have paid the price in attracting them to the new nest site. 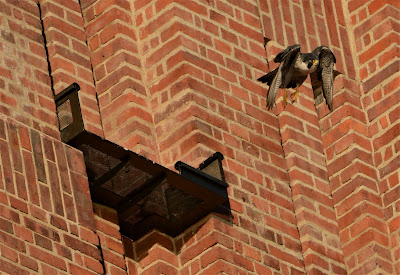 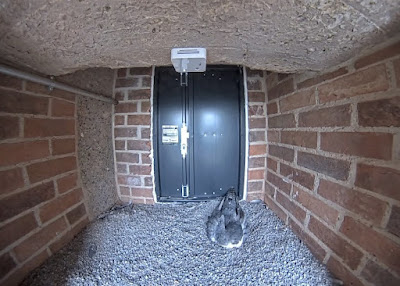 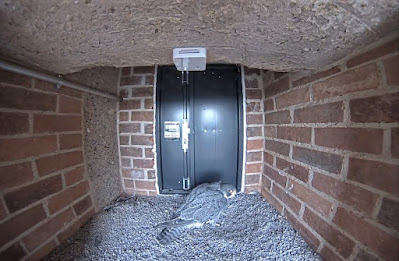 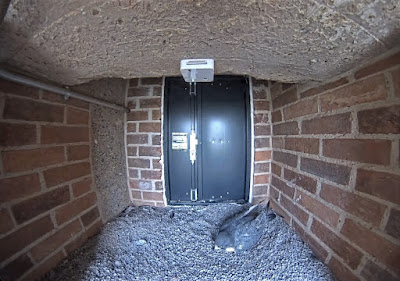 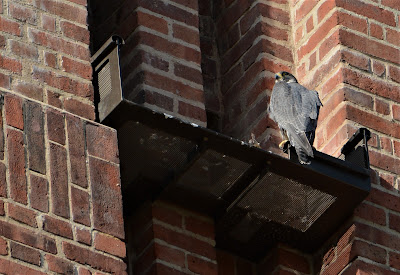 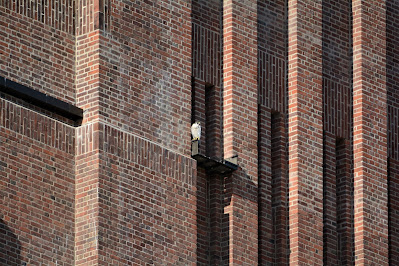 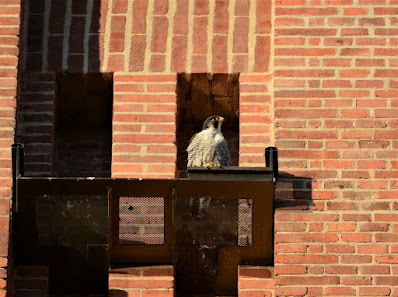 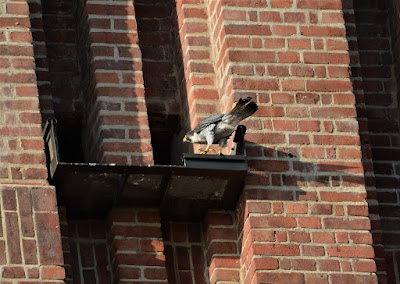 To date she has been inside the new nest site, every day of July, totally bonded to this new position, at times even undertaking ledge display with the Tiercel inside and renewing the egg scrape and rim often already.
A massive thanks should go to Battersea Power Station Development Company for their fantastic commitment to the Peregrines and Black Redstarts, above all for listening to my many requests and demands over the years.

Great to see everyone’s hard work paying off, as I said, such an incredible resilient species.


Following on from ‘Kestrel Update’, I visited both sites, Beckton Sewage Works and the Quarry site recently and both have fledged ok.

All of them lost height not surprisingly on fledging, with no natural awareness of danger as yet, some even came down to road level like the Quarry site, 2 fledgers in particular sitting in the middle of a road.

Approached these and they then flew quite well and got themselves aloft.

Watched the Beckton Thames Water birds also, all 5 of them, I had thought there was only 4; all flew well eventually from low positions and relocated higher.

Another good year from both these very productive nest sites, 9 juveniles. 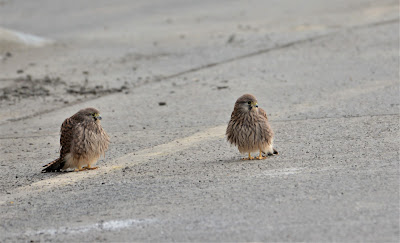 Quarry Site - 2 in the road 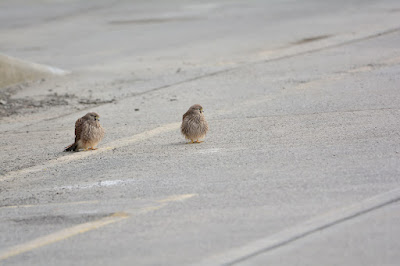 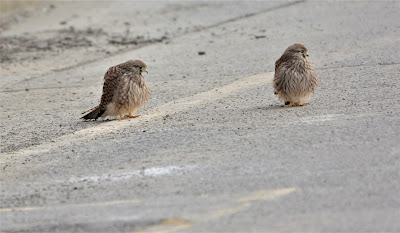 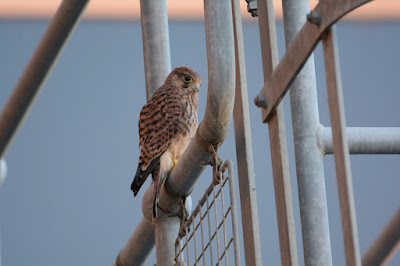 Beckton - came down low but flew ok after a while 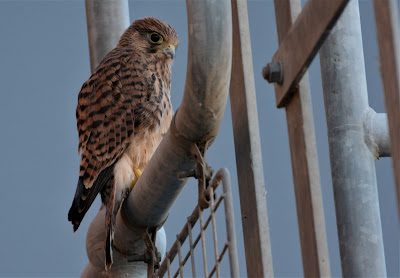 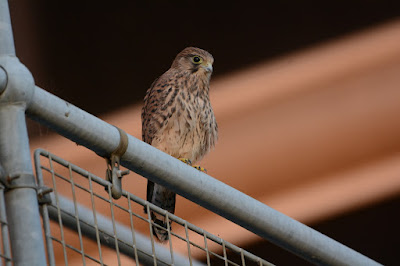 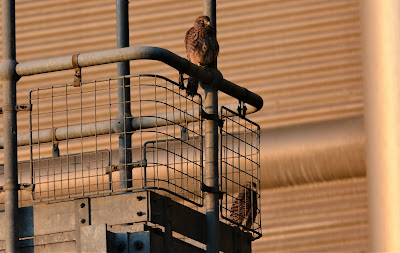 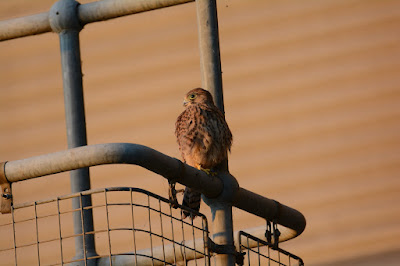 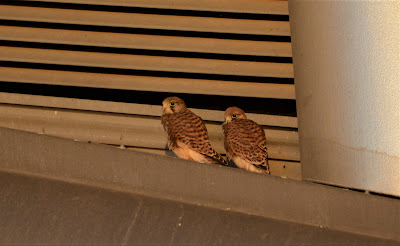 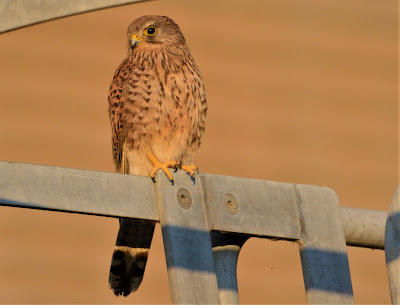 Adult female keeping the Crows/Magpies away 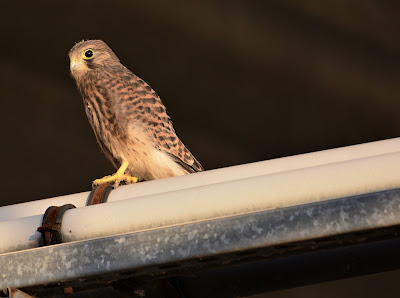 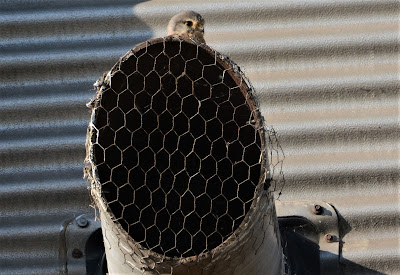 Male keeping an eye on them

Posted by Dave Morrison at 00:39 No comments: