Outfall
A bright but cold morning, only 4 degrees showing in the car, I had my hands in my pockets for the first hour, blimey it was cold, now I am retired I am getting soft.
I checked the Gull colony on arrival, now getting going with many pairs gathering moss and grass from the nearby tanks, also good to see a pair of Great Black Backed Gulls were present in the colony. As yet showing no sign of nest building but I will keep an eye on these, especially as there were a pair present in 2011.
I started to watch the river as the tide was coming in and got onto an Arctic Tern going up river at 7.45am, after this I had Common Terns going up in one’s and two’s, a final count later showed 12 Common Terns feeding as a group on the far side of the river.

Another migrant joined the list after; a single Common Whitethroat was heard in the scrub along with 2 singing Blackcaps and also 2 Cetti’s Warblers. I suspect there were probably other migrants present but the cold was probably keeping everything quiet. From here I headed to the Bay, Paul had just found 2 Ring Ouzel’s.

Bay
Thanks to Paul, we quite quickly located the 2 Ring Ouzels, usual brief views before they went to ground; it looked like a male and female. After last year’s female seeing a male was very welcome, although views were not great. Skylark and Meadow Pipits seemed to be everywhere, the grass very much to there liking.
5 Wheatears were also present on the short grass area, 2 cracking males, Paul had earlier had 3 males so very likely there were 6 Wheatears. 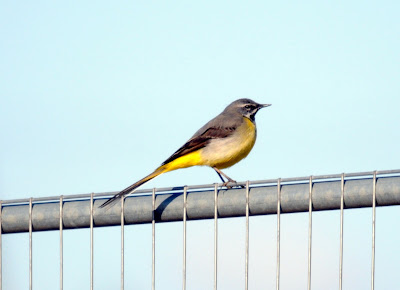 After this we moved down to the receding tide, a minimum of 12 Common Terns were present feeding on what appeared to be very small worms, left in the shallows, no idea what they were but obviously to their liking. It is also possible that these were the same 12 Terns seen earlier ½ mile up river at the Outfall.
To complete a good haul of migrants, 2 Swallows went through going north.