A rather cold but bright morning that quickly warmed up promising a good raptor with the bright blue skies, the usual transect was followed, new in was Willow Warbler but as yet no Sedges, Reeds or Whitethroats.
No luck either with Little Ringed Plover, last year they were present on March 28th, hopefully this weekend should see some new arrivals.
Blackcap numbers have risen quickly with 12 recorded, the same number as Chiffchaff, out gunning both was Cetti’s Warbler with 15 heard, with only 50% of the site covered it is likely there are around 30 singing males now. The remaining habitat not walked is even more Cetti friendly, the true figure could be even higher.


Bird of the day goes to a raptor, whilst scanning the skyline I picked up a fast moving raptor low over the woodland, even without colour the outline and speed were pretty unmistakeable, Hobby! As it got a clearer I picked up colour and detail, by size as it disappeared in the distance I would say it looked good for a female. Easily the earliest I have had one, this one beat the previous record by 9 days.

Elsewhere on site birds of note were:

Swallow – 1 over the Res
Yellowhammer -2
Sparrowhawk -1
Golden Plover – 100 aloft over the Farm Trail, many in summer plumage and well worth a look see from the public footpath.
Goldcrest – 1 singing
Green Sandpiper – 1 in the viewing area

On the Butterfly front 3 Small Whites and a Small Tortoiseshell were seen along with 2 Adders sunning themselves.
No larger Raptors, Red Kite and Marsh Harrier still needed but the site list is creeping upwards and now stands at 84.

April 7th
A brief visit, new in was Blackcap with 3 birds singing, elsewhere a single Cetti’s Warbler was making itself known. Waterfowl are departing fast with only 64 Teal seen and 5 pair Gadwall were present amongst the hordes of Black Headed Gulls.
The highlight of the visit was a constant stream from 6.35am of Black Tailed Godwits, several flocks ranging from 4 to 60 eventually numbered 269 birds, possibly a site record. All came from down river presumably roosting up for the night at either Crossness or Fords. 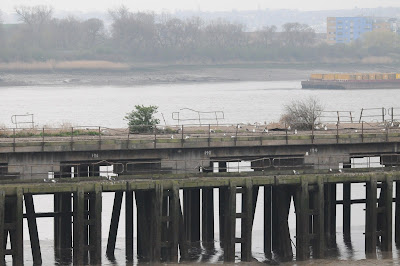 A single Curlew was in with them and can confirm the Lesser Black Backed/Herring Gull colony is getting into swing with several loud passes/dives by angry adults, quite strange as they have not even laid an egg yet.
A search for last year’s Great Black Backed Gull pair came up blank.