I decided on a day out on Friday, I have not been to Dungeness RSPB for a good while, I have popped into the Centre every now and then but have not been out on the reserve for years, must admit it is an excellent reserve. Thinking back the last time I walked the trails was the arrival of a Short Toed Treecreeper, that was many years ago, probably around 15.
I nearly decided not to go on Friday, fog was quite dense at home around 5.30am but I went and glad that I did as I had a really good day. First port of call was a sea watch from 7.30 to 8.50am; visibility was not great, around 150 metres in the mist but it gradually cleared, although it stayed grey and overcast all day. Surprisingly there was quite a bit of movement, all going east with Gannet being the biggest mover. Sandwich Terns had also arrived, first of the year, no rarer species but an enjoyable sea watch, as follows.

Gannet - 265
Kittiwake - 6
Great Crested Grebe – a minimum of 60 all along the coastline
Guillemot – maximum count of 12 sitting on the sea
Razorbill – 25, all flying east. This included one flock of 18
Goldeneye – 1
Red Throated Diver – 4
Sandwich Tern – 26 going east, most small groups of 3 or 4

After this I had a look for the Glaucous Gull which had been seen near the fishing boats and also 2 Snow Buntings nearby, no luck with either so I headed for the Reserve.
Driving down the entrance track and I had distant views of a Ring Tailed Hen Harrier along with a female Marsh Harrier both hunting. As I was watching them 2 distant white specks turned themselves into Great White Egrets, I knew one was here but I thought I would be lucky to see one let alone 2.Eventually they more or less circled back on themselves and I managed to get a few photos. There not great, the only way I could shoot anything was with a very high ISO, I am trying to sound as if I know what I am doing, the truth of the matter is I still don’t know how to work the bloody camera.
After seeing these 2 crackers I then headed for the trails, I picked up a drake Smew, 2 Redheads and no less than 8 Goldeneye. Moving on produced a very distant Bittern, 50 Golden Plover, 4 Bearded Tit and a total count of 4 Marsh Harriers including a superb adult male. 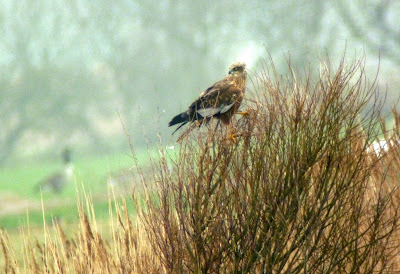 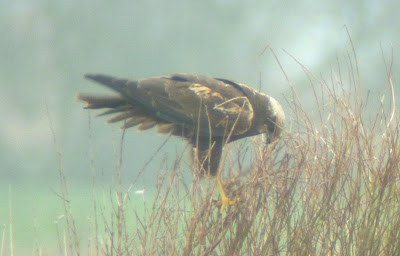 Whilst watching from Denge Marsh Hide I relocated the 2 Great White Egrets at the side of a reedbed, eventually both flew and was then gob smacked to see another join them! All 3 did a circuit and eventually landed ½ way towards the visitor centre.
I have not seen 3 reported but wonder if 2 of the birds are immatures after reviewing the photos, with the 3rd bird being an adult, all 3 seemed comfortable with each other. It could be that the original 2 seen are male and female; the earlier flight certainly looked like a display flight, one following the other similar to Bitterns?

Heading back I was put on to the Long Tailed Duck at the centre, distant views but a cracking looking bird.


To round off the day I watched around 25 Tree Sparrows in the bramble at the top of the drive, just don’t get to see enough of these little chaps.
An excellent day.