As some may know, I have for the last 12 years been involved with London Peregrines and there continuing colonisation of the Capital, unfortunately in an urban scenario they do clash with building owners, mainly due to their Schedule 1 status. In most cases I and others can work with them and a balance can usually be found to keep everyone happy including the peregrines.
Having to tell a manager that his roof is off limits for 3 or 4 month’s is not always received well, I can understand that, but by and large nearly all of them come round in the end and come to love having the peregrines on their building. They are a spectacular bird, all power and speed and I will never tire of watching them, nothing gives me a bigger kick than having a nest box I placed accepted.
Sad to say that in this country raptor persecution still persists and it is one big reason why sites in London are not publicised, it is a pity as the London public should have a chance to watch and be involved with these birds on their doorstep. It is an age old and awkward position, do you not publicise every site or publicise them with the view that, more eyes watching makes for a securer site. Parliament is publicised as it is secure, the Tate Modern is publicised as it is not a breeding site, in the end I think you have to judge each breeding site on its own merits and location, but is that right? If you get all the local people involved in each respective site there will undoubtedly be more security for the birds and that is what it is all about.

Out of town across the country other urban peregrine sites are publicised and on the internet, no problem. America, in particular New York, publicises every nest site and the world and his dog are involved, would the same approach be better in London, get local people involved?
If a minority of Eggers or Pigeon Fanciers want to find them they will, a recent court case showed this, an egg collector named 9 sites in London straight off the top of his head. In a rural location they should be kept unpublicised, there is little security on a lonely moor or cliff face to a determined individual. I have always kept all the sites that I monitor apart from Parliament unpublicised, but I must admit to re thinking, is it the right approach to each pair when it comes to their security and safety?
I visited a site in London this morning, it is one of 3 London sites I know off where Kestrels and Peregrines co-exist with little interaction between them I am pleased to say, the little mouse hawk is a particular favourite. The Kestrels all stay low and the Peregrines high, I know that peregrines will and have taken them but on each of these sites there is no threat from the larger raptor. One big reason is the abundance of feral pigeon in and around each of the sites.


I also witnessed an altercation between a Cormorant and a Grey Heron this morning, the Cormorant coughed up what I can only describe as what was left of a fish, as soon as it did so the Heron made a bee line for it.The Cormorant departed after putting up a bit of resistance and the Heron took the fish, little goes to waste in the bird world! 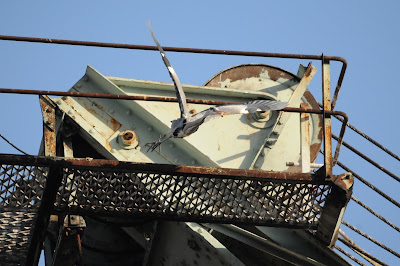