With the recent weather I headed down to the Outfall as I knew that, as in past winters, the wildfowl increases dramatically with the arrival of hard weather. Looking over the sea wall confirmed this with Tufted Duck hugging the low tide shoreline all stretched out, a later count recorded 362 birds, a good start to the morning.
Wildfowl numbers had gone through the roof, a count produced 102 Gadwall and 167 Shoveler, Teal I could only estimate, certainly 500+.With a rising tide Cormorants were piling in as well, a count of 52 came up but this was increasing all the time, on mid river there was also 8 Great Crested Grebes.
I turned my attention to the mud flats at the Outfall and looking west; this produced 6 Black Tailed Godwits, 146 Redshank, 2 Curlew and 2 rare waders for the Outfall, a single Bar Tailed Godwit and 3 Grey Plovers. The Bar Tailed Godwit I was particularly pleased with as it was unexpected; the Grey Plover I thought was likely given Gary’s and Nick’s sightings the other day. Having said that it is only the 2nd time I have recorded Grey Plover at the Outfall.

With Beckton slightly upriver I headed around there where the 2 East India men had done so well, I was lucky and arrived just as the tide was rising, it pushed birds towards me.
Scanning through the rocks on the water line showed 9 Common Snipe at the edge, just as I got on another one it flushed with the others due to a cyclist coming through, even before it flushed I had seen enough to confirm Jack Snipe. I had all to brief views as it went east with the Commons, the difference in size is quite apparent; it was seen to drop in around the corner.

Other waders present were 3 more Grey Plover, I know just like Buses, these were a separate 3 as I had seen presumably the same 3 seen earlier fly upriver. Also a good sized flock of 38 Lapwing were floating around and eventually landed briefly before heading off down river.
All in all a very good morning, I would like to have stayed longer to see what else turned up.

I recently posted photos of a colour ringed Sanderling taken at Southend on Sea on February 4th, courtesy of Steve Arlow, Simon Buckle and Jeroen Reneerkens in Greenland, I now have the information on the bird.Thanks go to them for such a quick response, see below.


Sightings of this bird: 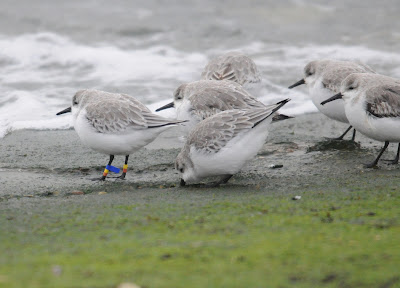