I started the morning a little undecided as to where to go, I am not use to having many spare weekends, there usually tied up with either Surveying, Peregrines or out with my missus. In the end I plumbed for Canvey Point arriving just after 7.30am, after 45 minutes with the usual birds seen I started to think about the Pier. Knowing that the 1st train out is 9.15am, I went, in all honesty I was numb from the cold and wanted to thaw out in the car.Arrived at the pier ,train delayed until 10.00am to check for ice, so eventually got out there at 10.10am.
High tide was around 9.40am, even as I walked up the pier I started to see Kittiwakes sitting around the pier on the sea and at least half a dozen mixed in with the Med’s on the ramp.

﻿ As many will know, the ramp where the Purple Sandpiper roosts and the Med Gulls rest is now unapproachable, you can’t get anywhere near it, this is due to all the construction works taking place and the fencing to keep you out.
Of the Purple Sandpiper there was no sign, work was taking place above and below so most likely disturbed, even the ‘tame’ Turnstones were not on the ramp. Going to the upper level I took a count of Kittiwakes resting up on the river, I ended up with 67, there were more further out at a distance.
Of the 2 ships I saw coming in both had large numbers of Kittiwakes following so it was quite obvious there was quite a number of birds in the Estuary. I stayed for just under 2 hours, surprisingly no Red Throated Divers or Auks were seen despite the cold conditions, highlights were 3 Pintail and 3 Great Crested Grebes. I spent most of the morning getting photos of the Kittiwakes, good to see them present in 1st winter and adult stage, as with the Mediterranean Gulls, most stages were present. 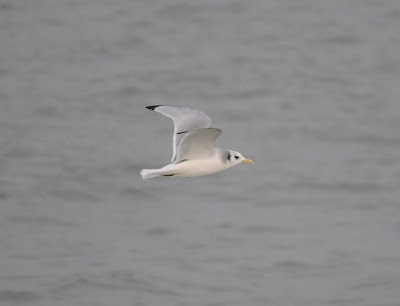 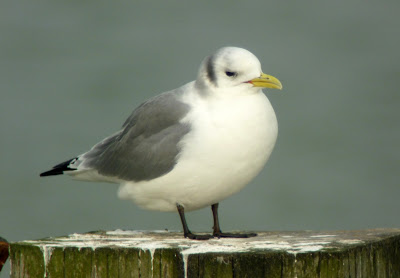 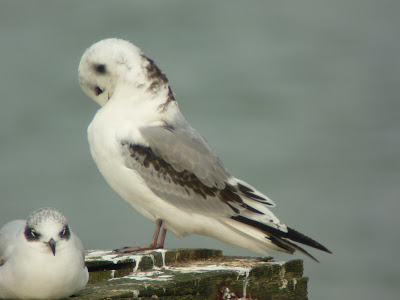 Prior to coming on to the pier I killed a bit of time on the foreshore where I had a small flock of Sanderling and a similar flock of Dark Bellied Brent Geese. In amongst the Sanderling flock was a colour ringed or flagged bird, will send it through, be good to see where it originated.


Also amongst the Brent Geese was a juvenile, this is the first one I have seen here at Southend.