As of late I am in a semi-retired state, I am getting more time to visit the patch and am also very lucky in that I get to go to different locations to survey for birds; such has been the case over this week.
When I say patch, like many other Londoners I take part in a light hearted competition every year to see how many species you can record on your local patch or flying over it, all my mates do it as well. It is good clean fun, the rewards are far more satisfying if you find a local rarity yourself, each year you try and beat the previous year’s total.
This week I have visited both Barking Bay and Barking Outfall, both are turning up good birds due to the weather, the way it looks with the freeze continuing it is likely that even more wildfowl and waders are going to grace the Thames.
I visited Barking Bay on Wednesday and covered as much ground as I could, of Stonechat there is still no sign, I can remember seeing up to 8 birds here, the recent hard winters have hit them hard unfortunately.
After covering most of the site I got 3 additions to the patch watching the river, this held good numbers of waders as the tide was out.
A female Sparrowhawk absconding to Kent joined the list as did a small flock of 8 Wigeon drifting down on the tide, they are not usually here and quite hard to get.
The best of the lot was an adult Mediterranean Gull resting up on the mud, I managed a couple of digi shots of this, although they are getting more regular every winter, locating one amongst the hundreds of Black Headed Gulls is another matter. 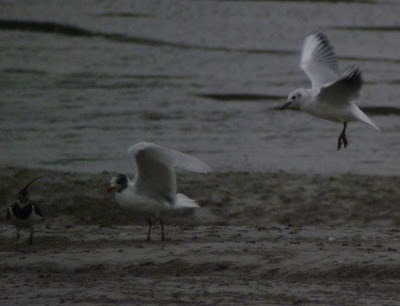 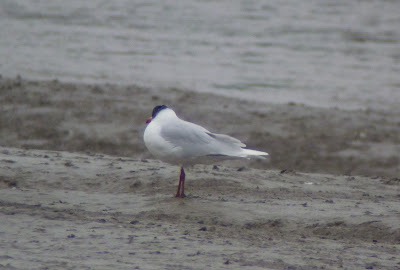 From Barking Bay I headed for Dagenham Riverside for the monthly hide tide count along the foreshore and the jetties. The main jetty on its day holds very large numbers of waders, namely Black Tailed Godwit, Lapwing and Redshank, today was no different.
Black Tailed Godwit numbered 454 with a single Bar Tailed mixed in with them; the supporting cast was 4 Curlew, 63 Shelduck, 84 Teal, 53 Redshank, 26 Gadwall and 29 Lapwing.
All of these jetties/structures are vitally important for London’s waders and wildfowl, steps are now in the process of trying to safeguard them all. 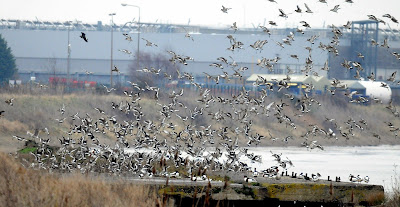 Thursday found me near Coryton surveying a large area which I have to admit I really enjoy, it has regularly turned up some good birds, despite the conditions, a white blanket of snow all over, I still saw some good birds.
I also came across a hunting male Sparrowhawk going after a small bird in a small bush; it looked like a Pipit, despite the Pipits advantage inside the bush, the Sparrowhawk would not give up even though it was getting hooked up. At one point one wing was caught and he could not move, in the end he reversed and came in at a different angle from the outside, the scrambled pursuit inside the bush continued and then suddenly the Pipit made a break for it.It unfortunately was his undoing as the Sparrowhawk caught him after a brief chase, the Pipit was probably exhausted. Sad yes, but nature is nature, everything has to eat. 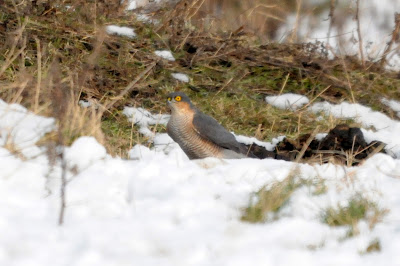 I also had a male Marsh Harrier come over, too far away for photos but always good to see a striking adult male.
There seems to be an influx of Woodcock everywhere at the moment and it was one bird that I thought I might pick up, this proved true with one bird seen, a bit distant and bad light but identifiable. 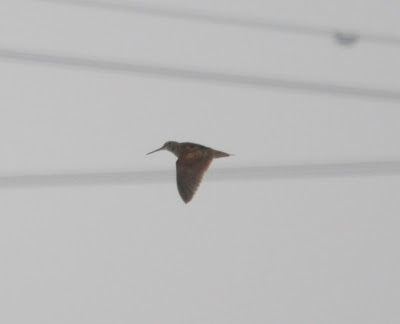 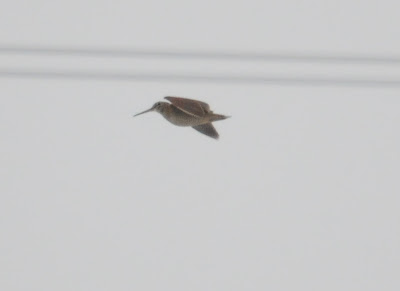