The weekend found me surveying firstly in the Home Counties and then over on Sunday to the North Kent Marshes, both sites have their merits and both provide good birding with some top notch species.
The Essex site is land locked but very remote and goodies like Short Eared Owl, Marsh and Hen Harrier, Merlin, Corn Bunting, Woodcock and Bearded Tit have all made an appearance. On Friday I did witness a rather sad sight in the shape of 2 Foxes, I know they are classed as vermin but I do not like to see any animal suffer, obviously as these were doing.
As I scanned an adjacent field I picked up one, obviously in some discomfort and only able to use one front leg, progress was very slow and it looked as if the bottom half of the leg was broken. A sad sight, perhaps a natural occurrence whilst hunting, who knows. As it proceeded on its way I was surprised to see another appear about 40 metres behind and following the first fox, so presumably Dog and Vixen, one was definitely larger than the other. As I looked closer it was again obvious this animal was moving slowly and in distress as well, sadly looking closer its front leg was also broke.

It is very easy to read more into this than there is, one possibly natural, but two together leads you along the lines of foul play, a very sad sight indeed.
Sunday found me and Paul heading for North Kent, hopefully for another crack at the Rough Legged Buzzard, en route we had Common Buzzard and a male Merlin perched in a low tree giving exceptional views. As per usual the bloody camera was in the boot but great to see one this close up.
We had a good survey, 6 Barnacle Geese were found in with the Greylags, possible candidates for wild ones given the cold snap? The pale Common Buzzard was also seen along with 2 more Commons, a female Marsh Harrier, 2 Peregrines and a distant flock of Dark Bellied Brent Geese probably numbered over 800.


Best bird of the day found by Paul goes to a female Snow Bunting in Egypt Bay, we both managed to get some half decent photos of this little cracker. 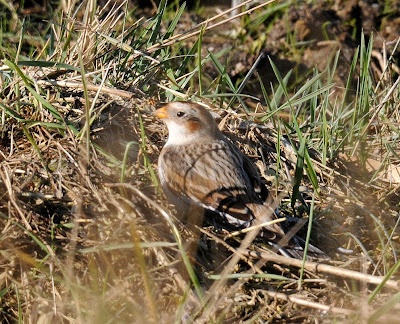 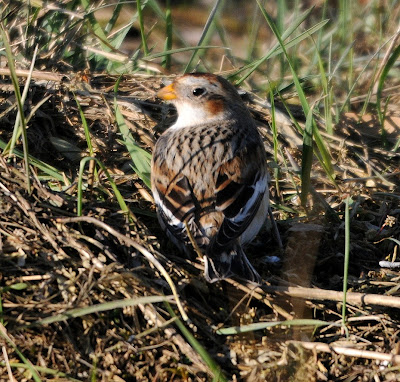 To round off the day we visited Cliff – Higham Marshes where we located the Red Necked Grebe, the bird was starting to show summer plumage, just don’t get to see enough of these. We also located a drake Scaup in amongst the Pochard so a good end to the day.