I headed for my old patch again at Stubbers after Paul and Shaun found a Drake Scaup late on Tuesday afternoon, on arrival I could see it straight away hugging the far bank with Pochard on Russell’s Lake. Walking round to the far side I managed a few digiscoped shots but it and the Pochard are very wary so I kept my distance. After having a good look at it, it is a cracking looking bird, we don’t get that many full plumage Drakes, most of the ones I have seen have been 1st winters or females. 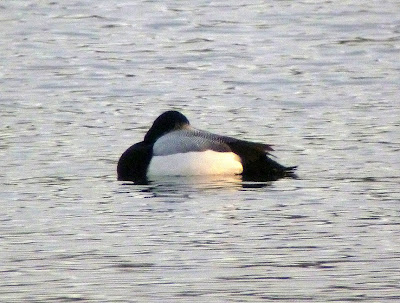 After this I scanned the rest of the lake, 2 female Goldeneye were diving together, the 3 Redhead Smew were still present and a new arrival was a Redhead Goosander. Now that I have a bit more time I will have to start covering this site again, the 2 lakes have never been fished so there is obviously a good food source.


From here I headed to another old favoured patch, West Thurrock Marshes, I did this patch regularly for a good number of years, being a Thameside patch it was inevitable that it would turn up some good birds. Grey Phalarope probably topped the list, the site has not changed much, the graffiti still provides an unusual background on the sea wall and it looks like the scramblers still use the site.
In the past the site has come under threat from developers being Brownfield, I know it was due for development, I suspect the reason that nothing has happened is probably down to the recession. Whatever it may be it is good news that it is still here, long may it stay this way.
Being so close to Rainham RSPB I often wondered why the RSPB did not step in as it has the potential to be a good reserve. It has the old ash lagoons which used to pull in waders years ago along with good woodland, scrub, ponds and reed filled dykes, although relatively small it would have been a good reserve for the local community.
I suspect due to the access problems, remote parking and location by the 4 Weddings and a Funeral Church, the council have only supplied 3 parking slots, it is never going to pull people in like a good ‘ Country Park ‘ should.
Back to the birding – I went straight to the far end to check out the large mud flats, on the way seeing Curlew and good numbers of Teal, when I arrived I had a nice selection of waders, see below.

Black Tailed Godwit – 67 including a colour ringed bird
Bar Tailed Godwit – a single seen
Oystercatcher - 8
Knot – a single seen, probably the same wintering bird that has been around for a while
Curlew – 24 including the earlier seen bird
Lapwing – 214
Dunlin – 50
Sanderling – 3 seen feeding with a small lock of Dunlin
Grey Plover – 2
Redshank – 52
Avocet – 7 resting up
Common Snipe – 16
Jack Snipe – 1

Like Stubbers I think I will try and get over as much as possible, it can be a bit remote but the quality of the birding is too much of a lure.