I am not sure what weather there was to come but without doubt I picked the worse morning this week on Wednesday, you know what forecasts are like, sometimes they err a bit, this morning they were bang on unfortunately.
I decided to head down to Shoeburyness given the fact that a Shore Lark and some Snow Buntings have shown recently, the forecast was strong winds, overcast and heavy rain from the south west. On arrival just after dawn it was windy and overcast, not too bad I thought and headed down the beach and got very lucky and located the Shore Lark after about 200 metres. I tucked myself away near a bramble bush and was preparing to take some digi shots when a mutt came out of nowhere behind me.Obviously young, he wanted specifically to chase Shore Larks as he totally ignored the Oystercatchers, the last I saw of the Shore Lark was heading over the fence to the safety of the MOD land.
I am a dog person, always have been, but of late I find myself resenting owners letting their dogs run amok and half the time they have not got a clue where they are, Ingrebourne Valley springs to mind.
I did manage to get a couple of distant photos beforehand but basically they are just record shots. 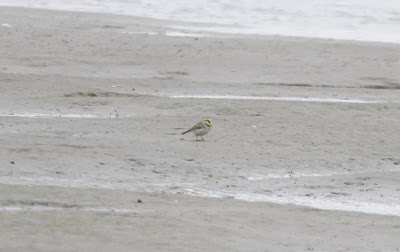 I retraced my steps and went back and tucked myself in to a large boulder cluster out of the wind, the idea being to watch the waders coming ever closer on the incoming tide. A large flock of Knot were present amongst many Oystercatchers, Turnstone and Curlew; I thought despite the very bad light I would be able to get good views as they got closer. It would take a while for them to get to me but I was in no rush and I was hopeful that the Shore Lark would return or the Snow Buntings appear. 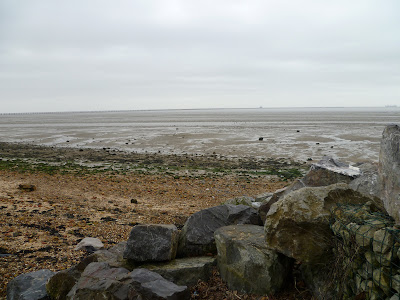 Not to be – with perfect timing a Wind Surfer appeared and headed out onto the mud scattering all before him, as he showed so did the rain.
Sometimes you have to know when your beat, time to go. 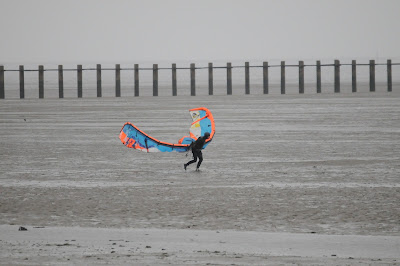