March 15th
Out in Essex again for what turned out to be an excellent survey, although it did not start off too promising with thick fog, this soon cleared though to reveal a glorious day.
Christ that sun make you feel good, it obviously affected the birds with many already paired and males holding to territory singing, I counted no less than 27 singing Skylarks.
The habitat that I cover is a massive private area, mostly grazing marsh, flooded dykes, large reed beds with Hawthorne spread out all over the site. This make it a magnet for farmland species like Corn Bunting, Reed Bunting and Yellowhammer, with the weather all were on territory singing.
Yesterday probably ranks as the best day I have had there in quality of species seen with no less than 5 Schedule 1 species seen, Marsh and Hen Harrier, Avocet, Cetti’s Warbler and Bearded Tit all making an appearance.


On top of this I also had Short Eared and Little Owl, Dark Bellied Brent Goose and a Woodcock, the survey will shortly be ending, a pity it has been a pleasure to cover.

I managed to get some photos, none too clever, due to firstly, the fog; secondly all wanted to fly into the sun or away from me, not complaining though, how could you seeing this variety of species?

I recently had only my 2nd record since I have been watching the site, about 12 years, of Bearded Tit with 3 birds seen in the Creek reed bed. A major rarity here I suspect that they go un noticed due to the fact that you can’t get anywhere near the reed beds, they are quite vast.
It seems that the Thames Water footpath will eventually open as they are doing some major works along it; they are also creating a new habitat. It looks very good and it was the sole reason that I could get close to the reed bed, also heard was Cetti’s Warbler. Photos below 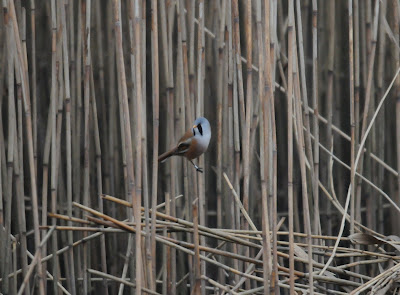