March 26th – Migrants!
Although I have had Wheatear elsewhere I am yet to see one at Rainham, for that matter any of the local patches that I watch.Rainham has traditionally always been the first place that I see one, I know they will come through shortly but today I thought I would get lucky.
I did my usual walk – river – reserve – woods and then a coffee, the migrants came near the end as I approached the centre.


I know that Little Ringed Plover have been seen on the new scrape so I parked up near the bus stop, presently I located 2 birds with one already wasting little time in displaying, you can’t beat a bit of sunshine. It was while I was watching these that I heard the trilling of Sand Martins, I located them a bit late but got onto 3 birds, most likely more went through.

Given the weather, I was also hopeful of a large raptor, I did get some but not as I expected. Sitting in the coffee shop eating a cheese and onion toastie, I scanned as you do through the window straight away picking up a large raptor very high. Walking outside I located 3 of them together moving purposefully north east, all Common Buzzards and most likely migrant and not local birds given the number. 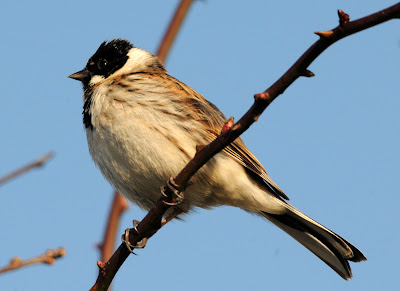 Elsewhere on the walk I also had some good birds, 7 pairs of Pintail were seen including the partial leucistic female, Little Egrets numbered 5 birds. The woodland produced 4 calling Chiffchaffs and a Blackcap was giving sub song.
Also seen were:

Butterflies on the wing were Small Tortoiseshell and Peacock, first Marsh Frog seen as well.
Surprisingly again no Wheatears, I expect with the weather they have just kept going, no doubt to Wanstead, they have had too many already.