Following on from my post of September 24th - it has been a bit of a slog but thanks to the London Wildlife Trust (Mathew Frith), Environment Agency and with help from the PLA it has now progressed further with the Thames Estuary Partnership now becoming involved.

On October 11th I attended a meeting in London with a number of others and came away content that it is now moving forward and gathering pace. Obviously I am just bird minded but there is, as always a far bigger picture, it seems as if the whole project can possibly be tied up with related fish conservation on particular roosts/structures.

It is an exciting project and I realise it’s not going to happen overnight, I am by nature impatient but realised from the meeting that the number of organizations/companies/people involved and the permissions needed to take this further is going to take time. Approaching individual owners of structures/jetties will be the next step in 2014 and there is also the possibility of funding for us, the ITHTG.
The main thing is that it is moving forward with the help of a lot of people who like me can see the value to wildlife of all these roosts.

Below shows one of the maps produced by GIGL, this is the roosts at Galleon’s Reach, it is one of 15 maps. The Jetty in Spring/Summer also houses the largest colony of breeding Lesser Black Backed and Herring Gulls in London as far as I am aware. 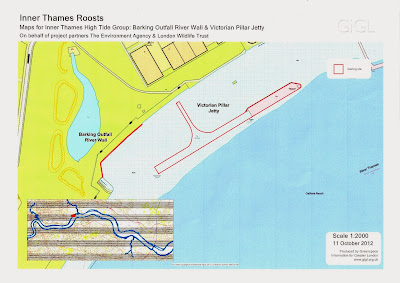 The Inner Thames as we know is a working river and is also the most densely populated urban area in Europe, consequently the pressure on the river ecologically is immense. Brownfield sites are fast disappearing also, areas of land that once supported breeding Lapwing, Shelduck and even Redshank are going. My local patch Barking Bay is being developed for housing and I have no doubt that one day West Thurrock Marshes will go. The marshes would have made a great reserve complimenting Rainham RSPB, with some landscaping it could have been something special due to the numbers of winter waders it attracts on its mud flats.

I could never understand why the RSPB never campaigned for it but that’s another story.