I have not been here for a number of years, it was once a favoured haunt in winter, visited regularly as I toured the Essex countryside with my 2 daughters when they were young, I like to think that they enjoyed it, good times, they both now have families of their own.
On a whim I decided to visit, one reason being is that I now have more time having retired from construction, the other, with the sunshine, I was hoping to catch up with the Glossy Ibis. I am yet to get good views of one, and this bird as I understand it has been a star.

I decided on firstly Layer Breton causeway and scanned around, the light was great and for the next hour a good few birds gave themselves up. Bittern was seen twice in flight, female Red Crested Pochard, 2 Goldeneye, Bearded Tit, Peregrine and Water Rail were the pick of the crop.
No sign of the Glossy Ibis. 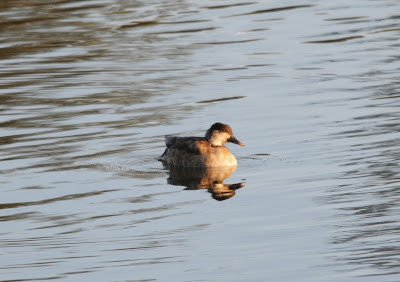 After this I drove round to the new Visitor Centre, the Layer de la Haye causeway has totally changed and is unrecognisable from years ago, as yet it is still closed but looks like it will open shortly, parking will be a lot better also.
To say the whole landscape has transformed is an understatement as I drove into the centre, it took me a little while to get my bearings, the new centre being of modern design was quite impressive.
Walking down to one of the hides, a new one, I wondered why it has been set back so far from the water’s edge, probably around 80 metres, all becomes apparent when you read the leaflet from the centre.
The Reservoirs storage capacity is being raised by 58%; this will mean that the top water level will increase by 3.2 metres – hence the distant hide. Islands are being created also for foraging and breeding habitat along with other new hides including a tree top hide in the woodland, again very impressive.

I had a scan around from the hide, I was looking for the 3 Bewick’s Swans that have been present, unfortunately I could not locate them, I did find a pair of Peregrines sitting out on the island enjoying the sunshine, also added 5 more Goldeneye and located 2 Goosanders hauled out on the far bank.
Heading back to the centre I had a final scan towards Wigborough Bay and located the 3 Bewick’s Swans, distant but unmistakable even at that range.


A good morning, all seen were rather distant views but no less enjoyable especially with the sunshine.