As mentioned before I don’t get over here as much as I used to, I visited this morning whilst heading for a Peregrine site in Kent, the QE 2 Bridge was solid so I went to Rainham instead.
All the work is now nearly complete and the site at long last is holding water, electric fences are in place so Lapwing and Redshank should now benefit whilst breeding with the extra security and constant water levels.
I did my usual round robin walk starting at the sea wall, it was low tide but a good variety of birds were seen. A Single Avocet was on the foreshore with a flock of around 120 Dunlin, a surprise was seeing 12 Grey Plover together on the mud, these quickly headed up river.2 Curlew were present along with an Oystercatcher, they seem to have come up the river to breed early this year.
Despite scanning through all the Rock Pipits, which numbered 9, I was unable to find a Water Pipit.


Moving on , I entered the reserve, a good count of 14 Pintail were found on both the Target and Aveley Pools but the undoubted highlight was a female Merlin creating havoc amongst the hordes of Lapwing, on sight of her everything flushed. The Lapwing flush in defence, it would be unlikely that she would take one. Walking on and I found the Peregrines in the usual spot on the pylons and a pair of Stonechat were also present nearby.

Arriving at the pools and a good count of 75 Golden Plover were present along with at least 3 calling Cetti’s Warblers. They have now cut some rides in the northern reed bed, it is a cracking spot to get some photos of Water Rail, the sun is behind you, you just have to wait and one will eventually cross for a decent photo. I had at least 7 calling birds within the area so I suspect there is quite a high density here. 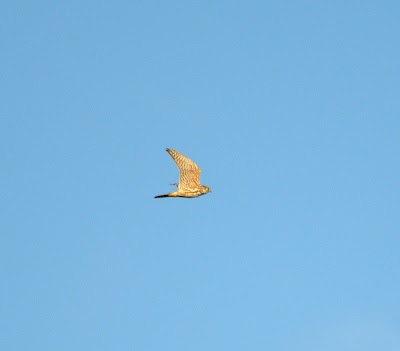 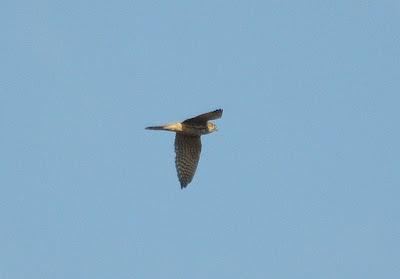 To round the walk off I had views of 2 distant White Fronted Geese, roll on spring.