Today we were due to be picked up by Marcus at 8.30am but the previous night a plan had been hatched over a beer or 2 to see if we could catch up with Black Grouse, a dawn watch was called for and then back for breakfast and Marcus.

Again we were lucky, arriving we could soon hear them from the road but unfortunately too far over to be seen, pushed for time and on the point of leaving we bumped into 2 birders, they very kindly pointed out a male sitting in a tree. A good distance away but nonetheless we all saw it so mission accomplished.

Every now and then you get a day birding that you will never forget, today was destined to be such a day, it’s when it all comes together, birds, good photos and weather.
We were picked up by Marcus our guide from E birders – see www.ebirder.net I have said it before, you can’t beat local knowledge, he was very good company and a wealth of local info as we arrived at the Cairngorms Ski Centre.

I won’t beat about the bush, it wasn’t easy, at my age,56, climbing mountains, even gradual ones was not for the feint hearted, Marcus’s knowledge of where to walk safely was paramount. Snow covered underground streams in particular were a hazard, sometimes with just a small hole showing and the stream 5 or 6 feet below in the deep snow.


By the end of the visit, we had covered 4 ½ miles, every step was worth it, we all got to see Ptarmigan and even better got some great photos, this was my 3rd visit for this bird so I was over the moon. 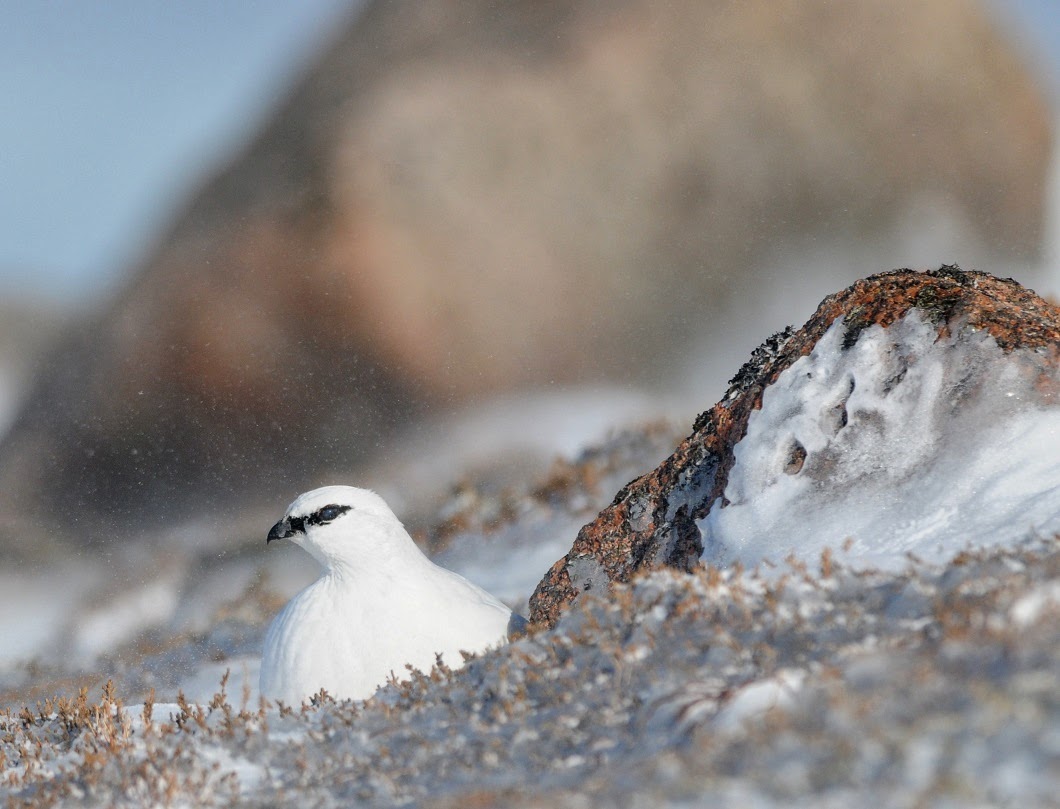 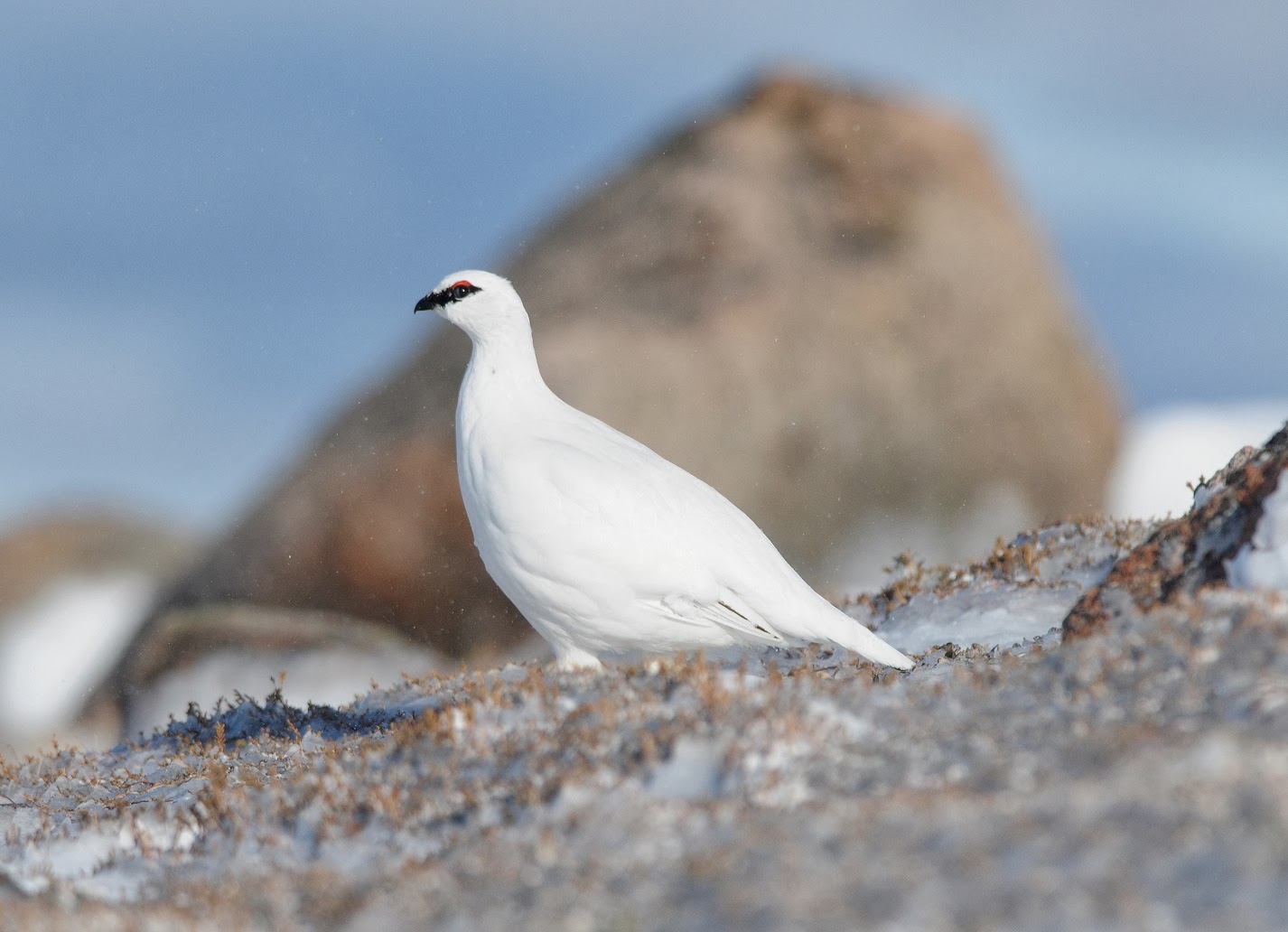 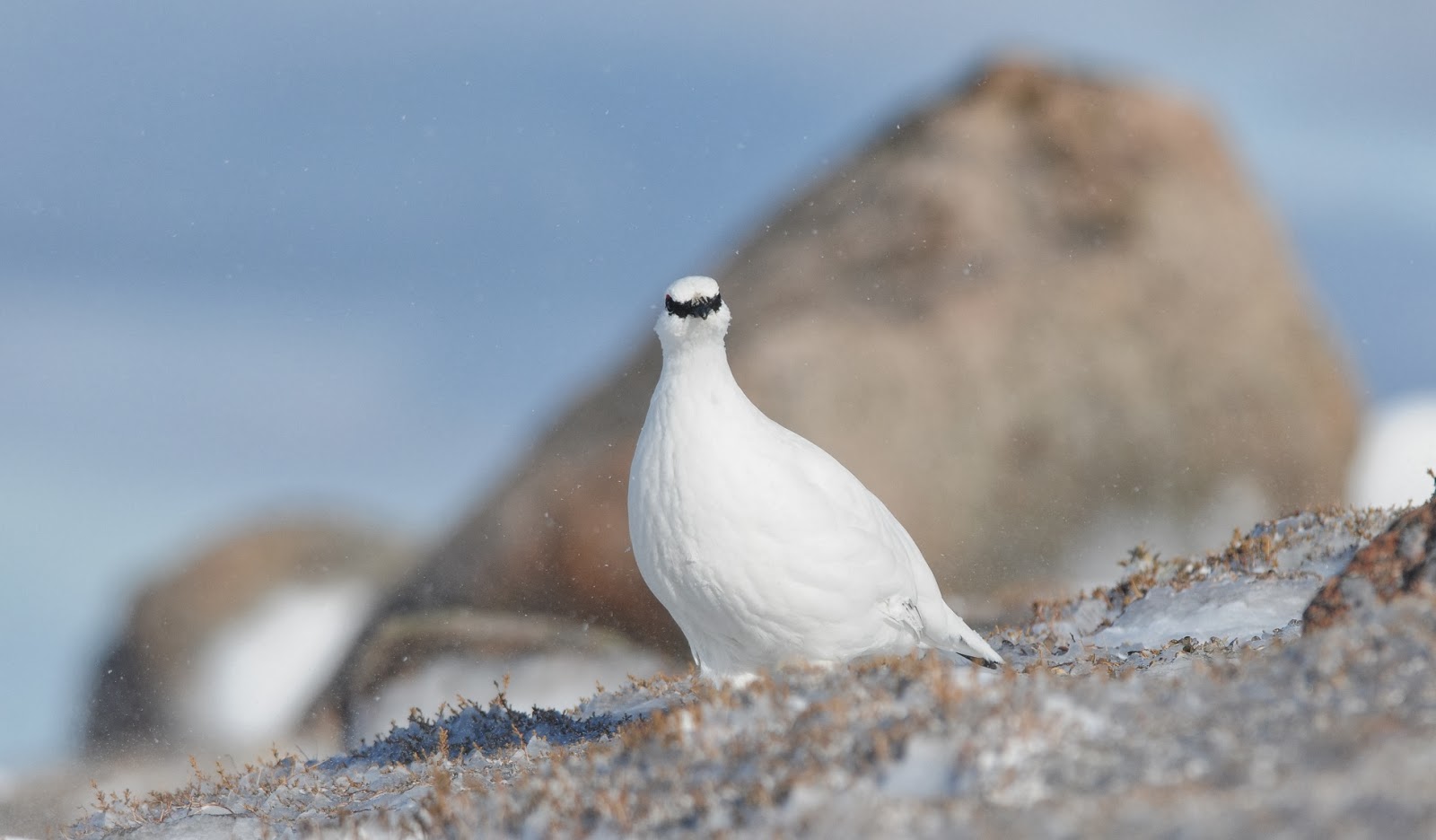 We were again very lucky, the Ptarmigan although high to us were low down for them, this was due to deep snow covering food at the higher levels. Marcus mentioned that on one trip a group he was leading covered 11 miles looking for them.
At the end of the expedition we had seen 2 or 3 flocks of Ptarmigan favouring the same mountain top, probably totalling around 60 birds, if I remember correctly it was called Windy Ridge. 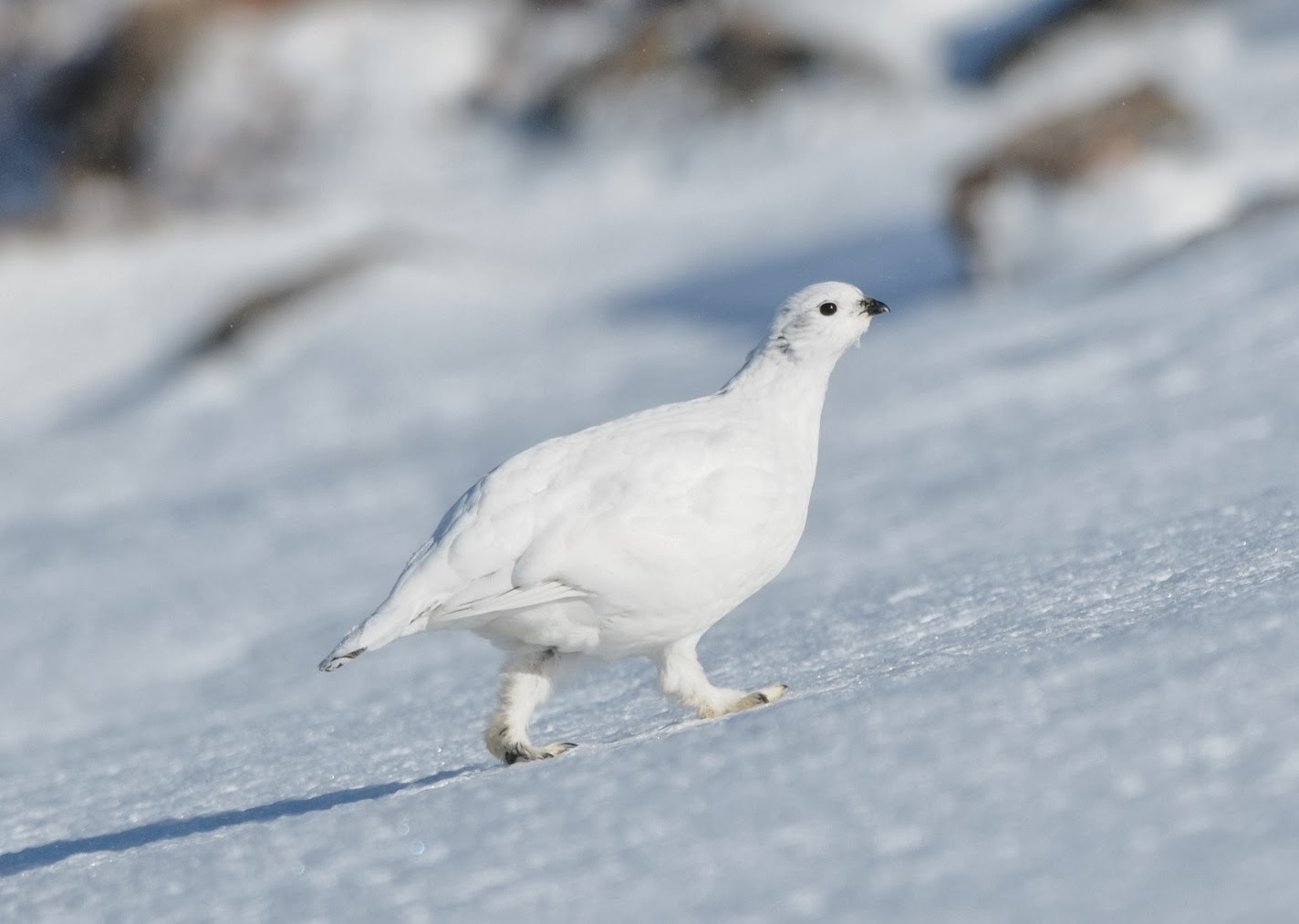 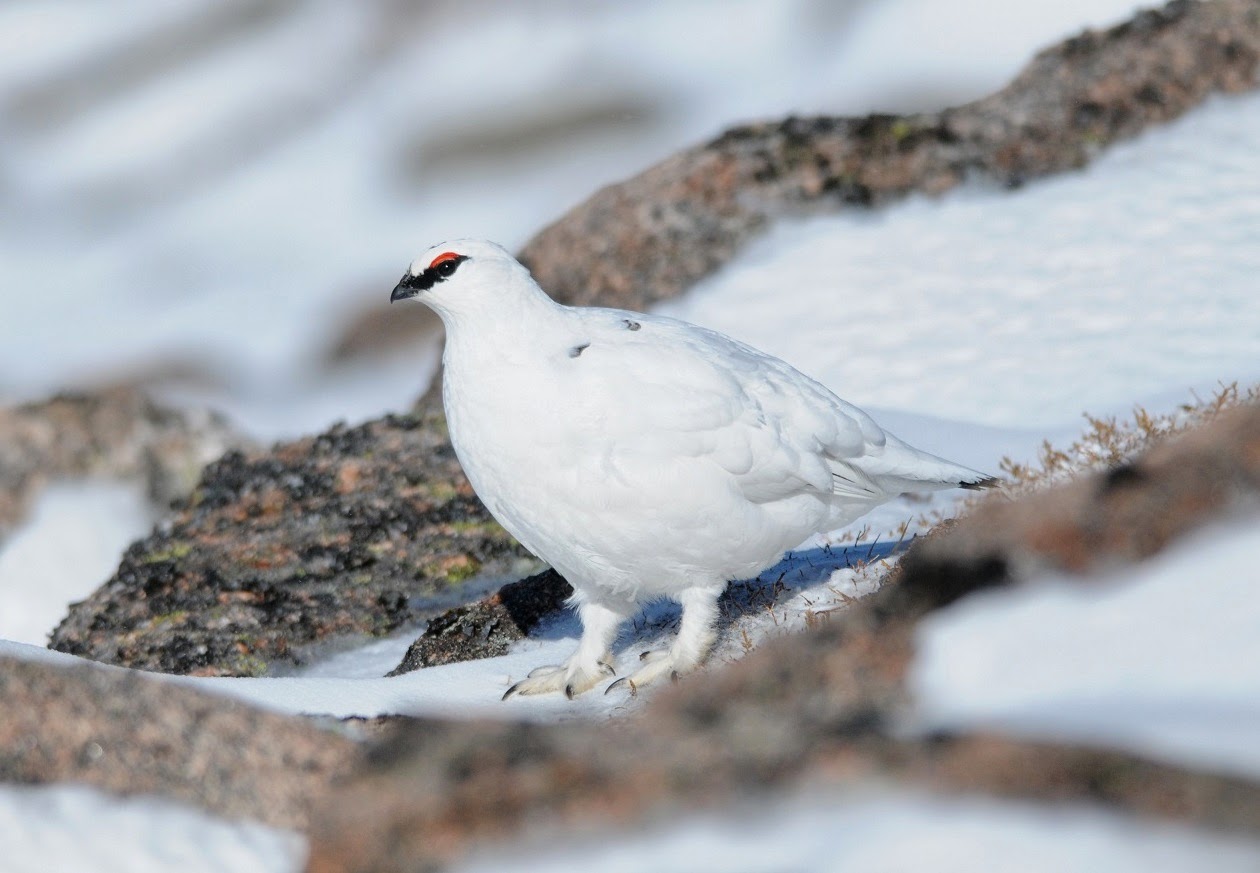 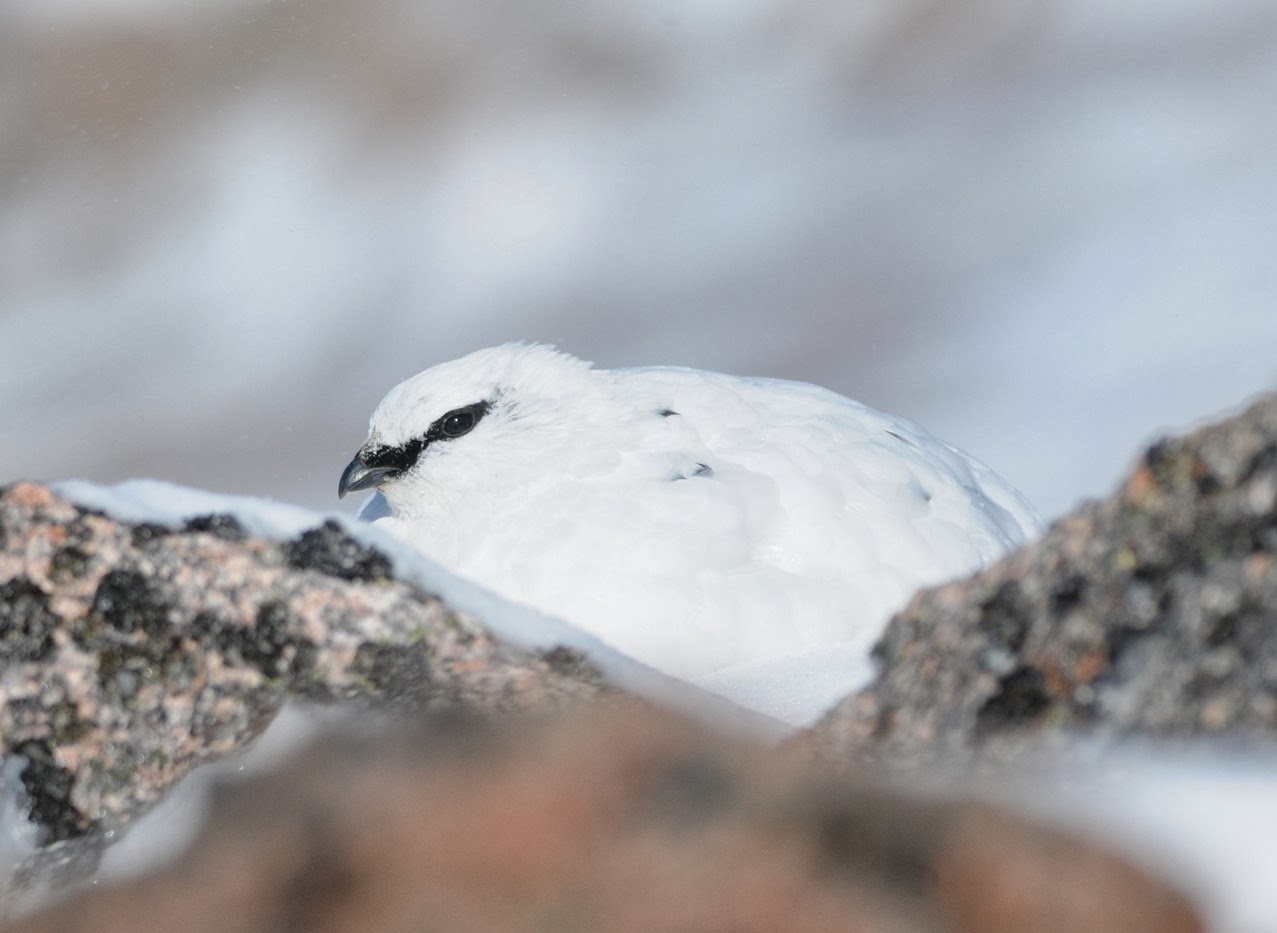 Other species seen were at least 3 Raven, around a dozen Red Grouse, a Mountain Hare and 1 or 2 Snow Buntings. The Red Grouse were often with the Ptarmigan sharing the same habitat, I always thought that they didn’t co exist in the same area, you never stop learning.
All in all we were up there about 5 hours, the trek back downhill I thought would be easier but must say it worked your calf’s well, it was good exercise and although knackered I thoroughly enjoyed it.

I now have calf’s like a bodybuilder, it could be the spur I need to lose a bit of weight and get fit. 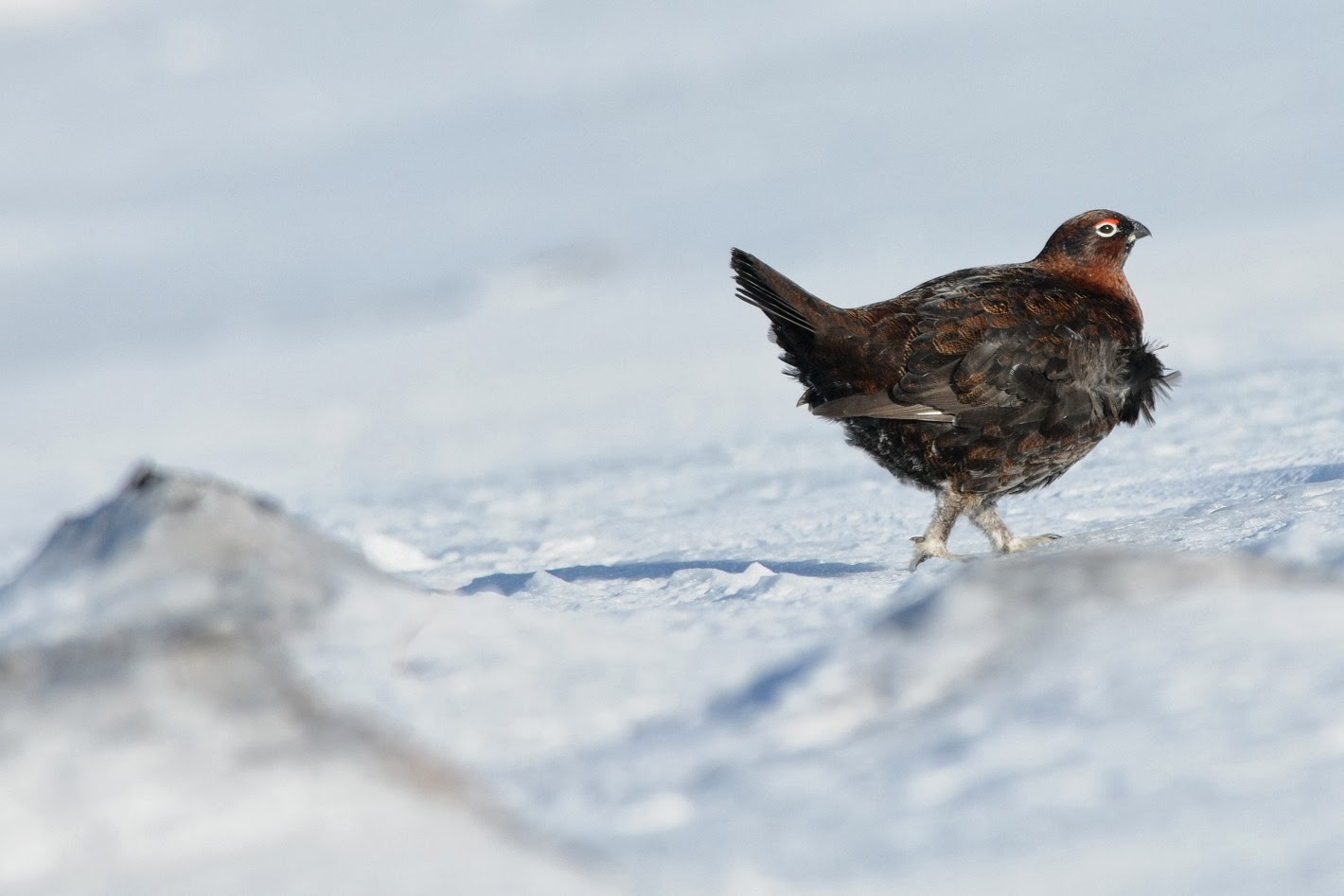 After this arriving back at Marcus’s 4x4 we headed off to another site, Findhorn Valley, this time we were after Golden Eagle, it was sunny and hopes were high, we were all thinking that after the Ptarmigan it would be hard to match the morning, but match it we did with 2, possibly 3 Golden Eagles.
All in all we had about 5 sightings of them which definitely related to 2 separate birds but the feeling was that there were possibly 3 given how quick another would appear in an area a good distance away after one had just been seen going in a different direction.
The views although distant for camera work proved excellent through bin’s with one bird in particular providing pretty good views, this included hovering on the side of the hill with its legs hanging down. 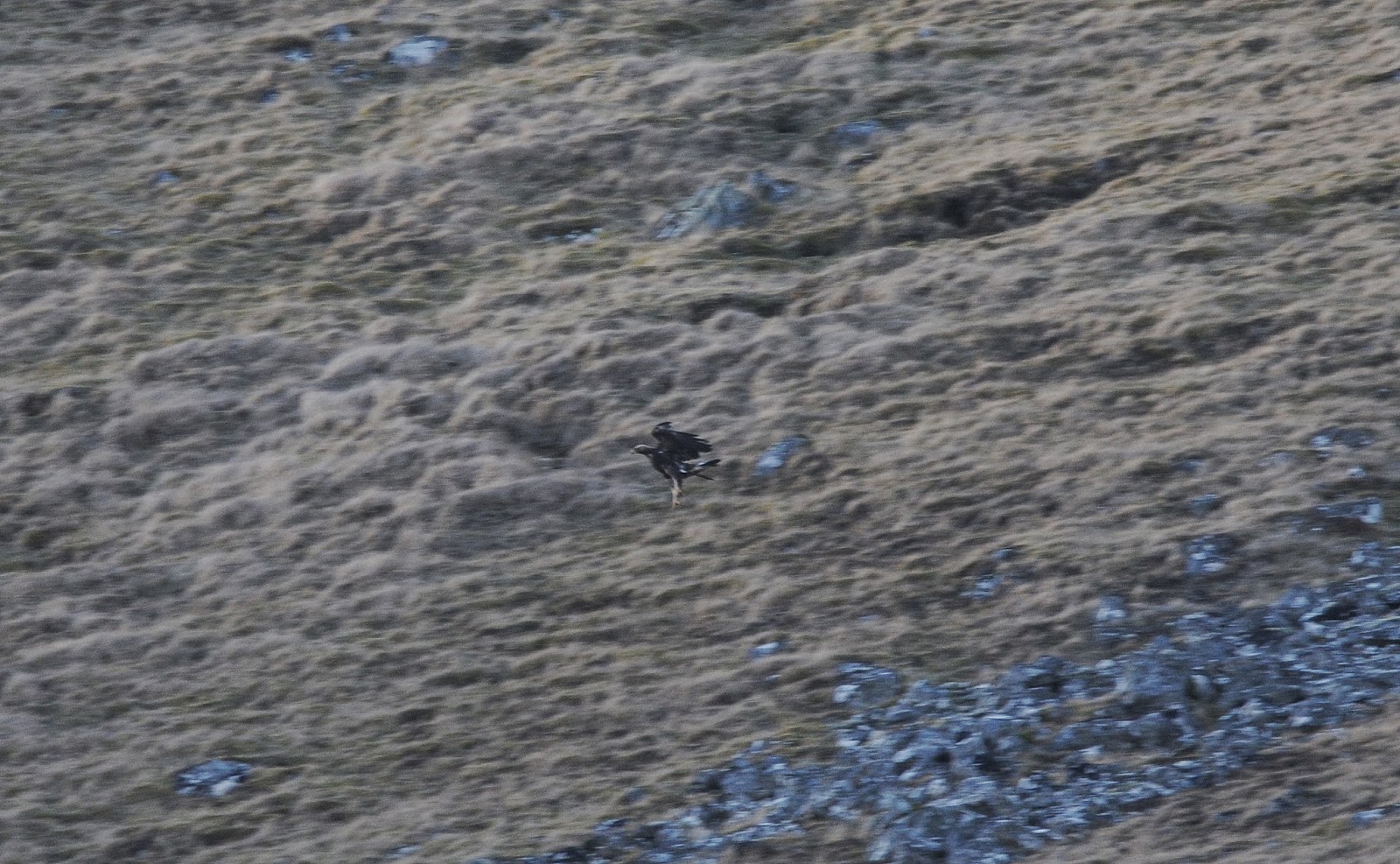 We ended up having a really good afternoon, Golden Eagle is a Scottish speciality but we also added 11 Common Buzzards, 9 Ravens, Peregrine, Kestrel and 6 Dippers.

Quite a day and one I won’t forget in a long time.