As I mentioned in my recent Rolls Farm posting this is another site long overdue, I pretty much used to walk this regular 20+ years ago, in truth I didn’t start off intending to walk the walk and do the circular route but there were simply too many good birds on show not to.

I came in at the Silcott end, my idea was to time it right and get the high tide which was around 11.30am, as I walked bits of it from years ago started to effect the brain matter, a rare event these days as memory loss seems to go hand in hand as I get older.
As I walked up the channel heading towards a very distant Mersea I started to see some good birds, Waders and Wildfowl were prominent everywhere especially Dark Bellied Brent’s, Wigeon and Dunlin.

2 Goldeneye and a Green Sandpiper headed the list until I got halfway along, I then found 2 Smew mid channel, no less a Redhead and a stunning Drake, I watched these for a good while, like a lot of good birds you just don’t see them enough. Pressing on I added another couple of Goldeneye and then came a group of 12 Red Breasted Mergansers, again not a bird I see a lot off so spent a bit of time with these.

None of the Great Northern or Black Throated Divers as yet that had been seen or the Long Tailed Duck and after a brief chat with an RSPB chap doing the rounds, it turned out they were in the other channel looking towards Bradwell.

There was still enough time to catch the high tide before it dropped so I decided to carry on, I must admit by the end of the day having undertaken a 6 ½ mile walk I knew it, but on the other hand I got to see some really good birds. These days you seem to carry more gear than ever, I had binoculars, a backpack laden with grub, digiscoping stuff etc., a telephoto camera and of course my telescope slung over my shoulder. Ideally one should be left behind but what do you leave? Its getting to the point where, if I fell over, I would have so much bloody gear on I wouldn't be able to  get up again, all they would see would be 2 little legs sticking out of a Dyke.
As I carried on I picked up more goodies, at least 6 Marsh Harriers in view at the same time, a large flock of Pintail, more Merg’s and at least 6 Rock Pipits. The jammiest one was undoubtedly walking down off the sea wall for a call of nature visit and flushing a Jack Snipe, another very good bird.

Eventually after about 4 miles I came to the other channel overlooking Bradwell Power Station, right on cue out came a flying Great Northern Diver, I initially at the time thought this may have been the Black Throated but checking the photos showed otherwise. I watched this for a while as it headed right out and was lost to view. By now I was thinking well worth the walk but it got better as I then located another Great Northern further up the channel, this one gave stunning views through the scope. The only down side was the weather, it remained grey, dark and murky all day.
I had also forgotten how long Great Northerns stay under, I could have put the kettle on and made a cup of tea it was so long, food seemed to be Crabs. 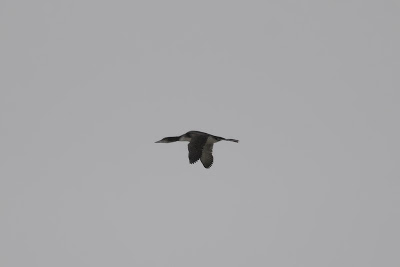 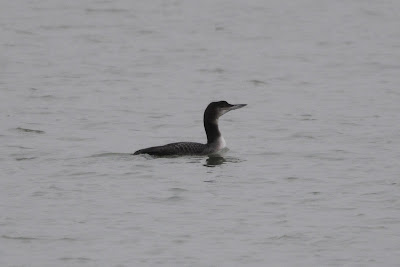 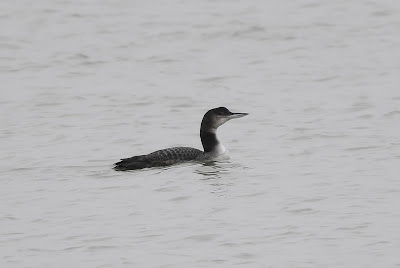 I got some record shots and carried on, next up were a pair of peregrines initially both sitting on a fence before both hunted and prey was taken, I watched these as they both left, the Falcon with the prey heading towards Bradwell.


As I carried on I was constantly scanning for the B T Diver and the Long Tailed Duck but not to be I ‘m afraid, another reason to come back as I headed back towards Silcott, I did add 59 roosting avocets though and 2 Common Scoters.

To round off the day I had 2 calling Bearded Tits, the whole walk had taken just over 6 hours starting at 8.45am and getting back to the car around 3.15pm.As I write this there’s not a bit of me that’s not aching.