Against my better judgement on Saturday I went to Canvey Point, the overnight rain was very evident with flooded roads on all the approaches to the Point and added to this the forecasters had given even more rain. The roads, and not just a few, were flooded all over the island, after seeing the news later I gather Southend was the same.

High tide was around 2.30ish but due to the weather I decided to go even earlier than my usual 2 hours before, I turned up at 11.10am in the hope that there may well be some movement with the low visibility. I didn’t have long to wait before a large flock of Terns (40) seemingly dropped out of the cloud and murk distantly at 11.16am, an excellent flock of 40 Black Terns heading up river.


From then on up to around 14.45pm when I left they came in, sometimes larger flocks right down to 2’s.
All though rain was present for most of the morning, at least an hour was lost to heavy rain and low visibility where it was just impossible to watch. 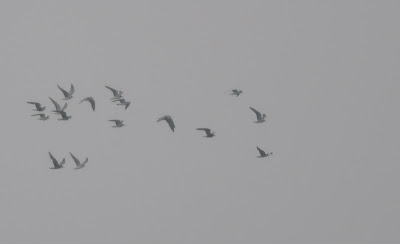 I also met Tim, good to meet you, he came along slightly later but saw a lot of the Terns also, his counts will no doubt be higher as he stayed. Below is a record of the morning of what I saw going upriver, I took photos of the Black Terns where possible for more accurate counts for review later.


Without doubt the largest count I have had there with 204 Black Terns seen, as I said Tim’s counts will be even more, added to this I did not see one bird come back out.

I saw 10 Arctic Skua’s including a flock of 8 which landed mid river and included a couple of pale phase birds, very nice. A single Little Tern was seen early as were a flock of 3 Whimbrel.
30 Black Tailed Godwits, 7 Golden Plover, 2 Mediterranean Gulls and 6 Common Scoter made for a cracking morning.