It is becoming well documented now that many Peregrines are now hunting at night, the pre dawn/lowlight early hour has always been a favourite, but out and out night time hunting seems to be now taking place in many Towns/Cities.
Much of the proper nocturnal time hunting I think relates to taking advantage of a wild bird food source, whether it be migrational or a cold weather movement in the winter.

It is opportune feeding taking advantage of the conditions, urban illumination and the peregrines incredible eyesight.

The relatively weak flying species like Coot, Moorhen, Woodcock, Little Grebe etc, all move around at night as the safest way to avoid predation, all these species I retrieve fairly regularly from prey collections.
Much of the nocturnal data is coming from CCTV, I am lucky enough to be watching a few of them including cameras at Battersea Power Station, it gives you an insight into a previously hidden world, especially when you have playback.
I have now been watching more or less daily now for 3+ years at Battersea and have noted on playback, usually between 12.00am – 3.00am either the Tiercel or Falcon perched, alert, head searching this way and that, obviously in hunting mode.

In regards to prey and nocturnal hunting, it has always been wild birds until recently, on July 20th I happened to log in (off out on a survey) just after 3.00am and saw her arrive live on camera with a live Feral Pigeon.

It was quickly despatched but offers the question, was the Feral taken whilst roosting inside the Power Station?
It is known generally that pigeons are not nocturnal movers, they usually go to roost and that’s it for the night, another consideration possibly is that it was disturbed inside the Power Station and flew and the Falcon intercepted it, opportune feeding?

Whatever it is, if they’re taking them static, nocturnally at roost inside the Power Station, it could be yet another string to their bow in regards to hunting behaviour for this pair. 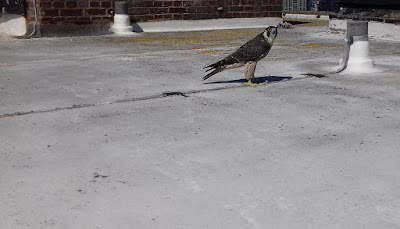 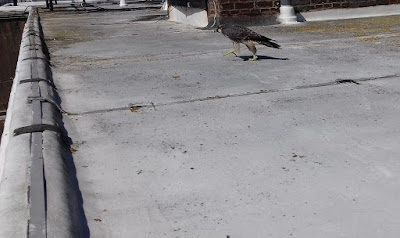