One thing that we have been doing this year on all the grounded juveniles is to ring them; Paul is placing the standard BTO metal ring on the juvenile’s right leg on all grounders.

The juveniles adopted siblings are all Green colour ringed on their left leg, as you can imagine with 5 juveniles now buzzing around, it makes identification far easier, look for the bird with no colour ring. The colour scheme has been very successful and we have had some good returns of previous young.
I picked it out the other day even before I had seen its legs, it is paler than its adopted sibling juveniles, it does show up quite well.

There is some variation in juveniles, you do get pale ones and I have seen some very dark juveniles, I suspect just down to the genes of the adults.
The foster juvenile was interacting with another juvenile, tail chasing each other, mock grabbing, all the time they are learning as part of the process of eventually going there own way.

It was good to see and puts a smile on your face; the little chap has been accepted and is now part of a new family.
I tracked them both, all the time ‘playing/practicing’ on each other before being lost to view about half a mile away.
I even caught up with her later, going on head shape, size and length of tail I am leaning towards a female.

She was resting up on a pylon quite a way from her ‘adopted’ site, totally at ease, relatively low with a juveniles total lack of fear, the wild awareness will come later. 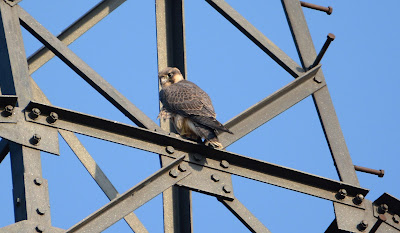 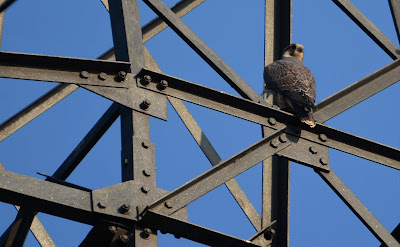 A good satisfying result all round, which wouldn’t have been made possible without the great work the Wildlife Hospital undertakes.