After last year’s success with 3 juveniles, more of the same was hoped for in 2015, with the site now in full swing construction wise, my hopes were that they would adapt to the changing landscape.

Bearing in mind that they have been used to a derelict Power Station for a number of years, the pair’s resilience has proved quite remarkable with the major works just about everywhere in 2014/2015.

In 2014 we managed to get them off the Power Station and over to a purpose built nest site, my obvious hopes were that it would be more of the same for 2015.Over the years though I have learnt to never take anything for granted with them, unpredictability seems to go hand in hand with the species. 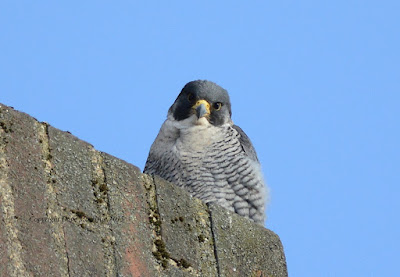 Battersea Power Station Development Company efforts along with Skanska’s have been quite remarkable in, not only providing them with a nest site since 2013, but also making sure that the correct mitigation is always in place to avoid any disturbance issues.

For 2015 we had also added 2 new platforms, this was after all 3 juveniles ‘grounded’ the previous year, this was to give the juveniles the extra space needed to exercise and build wing strength and muscle.
Anyone connected with peregrines will know, when fledging time comes it is never easy, as much as you look forward to it, you also dread it at the same time.
We were lucky with the grounders in 2014, all were seen and located when they came down, due to the vastness of the site it is the territory of several Foxes, they are the main danger, especially when the site is not active.

However, 2015 turned out even better than we all had hoped, 4 juveniles graced the Tower and fledged without incident, the new ledges had proved a success and all 4 made the flight over to the Power Station.

As juveniles go, these were no different; the working site became a playground and learning facility much to the amusement of the site populace. The Tower Cranes on site became ready made perching/resting point’s in-between frantic chases of each other and the adults, especially if they had prey.
In the coming months many of the workforce kept an eye open for them and the adults, this was borne out by the notices all round site and the enquiries that I answered whenever I visited. The peregrines generated a lot of interest, it is good to see that people care and there is always a place for nature, even on a large scale working construction site. 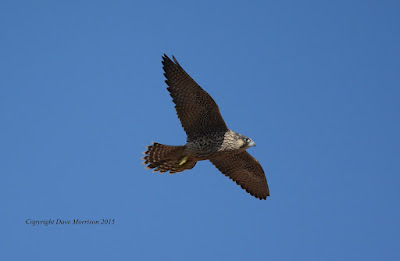 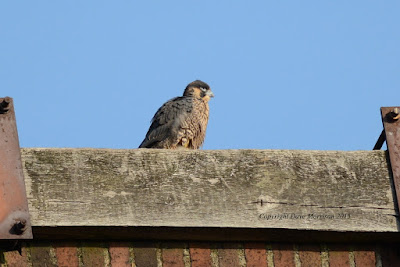 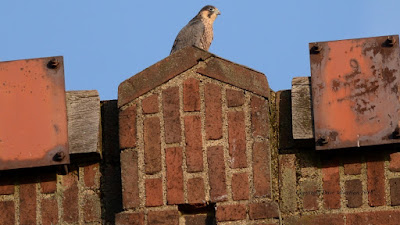 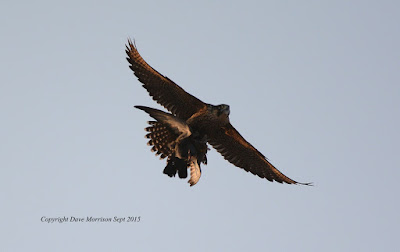 With natural juvenile exuberance, the fledging and learning period did not go without mishap; it was inevitable on a site this large that one would not get itself into trouble, so it showed.
One of the juveniles flew to the top of a chimney; all are now undergoing complete rebuilds, and managed to drop down inside it. This was at a pretty early stage shortly after fledging when flight is not under 100 % control, it is likely that a gust of wind blew him off and down he went unfortunately.

The base of the chimney opened out to a large wash tower, it was here that he landed on girders none the worse for wear.

However getting back out was not going to be so straightforward, this was due to the fact that internally the wash tower had been netted off to keep out the many Feral Pigeons.
A decision was then made by BPSDC and Skanska, the contractor for the Power Station, to send down Abseiler’s and cut out large squares of the netting to let him out.

It worked, it took him a few hours but eventually I am glad to say he found one of the holes and exited to freedom, a great result for all concerned.

With 2016 just around the corner we are hoping for more of the same, there Tower is due to be moved on Saturday October 31st but will then be re erected the following day, 80 metres from its current position.