With the wind coming round to a pretty strong south easterly, I was not expecting the jetty to be as full as it usually is, with a temperature of 2 above it felt a lot colder.
Rather surprisingly there were a good number of birds present; I expect the Lions share would be on the wall at Crossness tucked up out of the wind.
As it stood, they were all very flighty, this is normal but a passing peregrine kept many on their toes with a couple of low level passes.

Bird of the afternoon went to a Bar Tailed Godwit seen going down river with 7 Black Tailed Godwit, I expect making for the Stone Barges or Rainham RSPB.This year Black Tailed Godwit numbers in this winter period are low and way down, normal wintering numbers for the last 3 winters have been far higher. For some reason they are not coming down the Thames even allowing for cold weather movement, the numbers are present at Cliffe RSPB, at the moment we are at least 50% down on normal winter figures.It does make you look for reasons, bad breeding season, do the low numbers correspond elsewhere and so on?
Hopefully it is just a one off and we will return to the normal numbers next winter of around the 500 mark.
16 Curlew, 212 Lapwing and 155 Redshank made up the rest of the waders and 91 Teal and 40 Shelduck completed the Wildfowl.

The old Fords Jetty much like the Crossness River wall roost over on the Kent side probably rate as the largest roosts within the Inner Thames, the only other roosts that are comparable would be West Thurrock, all are extremely important to wintering waders and wildfowl. 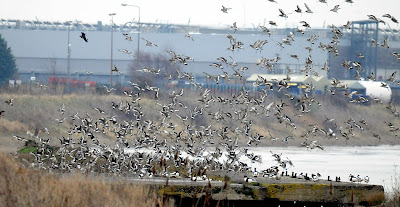 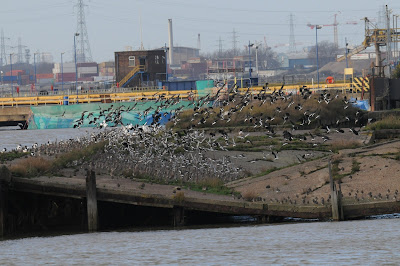 Both Crossness and the Fords roost are connected and relatively close to each other, if the wind is light, Crossness shades it especially with Dunlin numbers. If however the wind say is a strong northerly, the waders and wildfowl will make for Fords, vice versa for a strong southerly, they will go to Crossness.Unusually today though they were still present in respectable numbers.
Hopefully all will remain for the future, they are vital roosts.