Alpha Pools and the Hoo Peninsula


We again opted for a visit to the Alpha Pools prior to starting the survey at 9.50am, a bit of a fresh walk out but well worth it in the quality of the birds present.

The only disappointment was that they were mostly at the far end of the lake but Paul found some goodies amongst them.
First up was a Black Necked Grebe followed by one of the 2 Long Tailed Ducks that are present, after this a Slavonian Grebe was located followed by 2 female Scaup. No doubt due to the number of birds present , the size of the lake, there could well be more goodies lurking, very likely more Scaup.

The Lesser Scaup hybrid was also seen along with a single Little Stint, despite a good search we could not locate the 2nd bird that we saw in January, all in all a great start to the morning, we moved on….


The drive out along the track was quite productive with 3 Common Buzzards seen along with a single Marsh Harrier, we also saw 6 Ruff mixed in with the Lapwing, I later saw these bunched and climbing obviously evading a bird of prey. With the flock bunched like this I estimated there number to be around 1400 birds, quite a sight.

The highlight of the survey however was 35 White Fronted Geese along with 2 Barnacles mixed in with them and about 250 Greylag Geese. 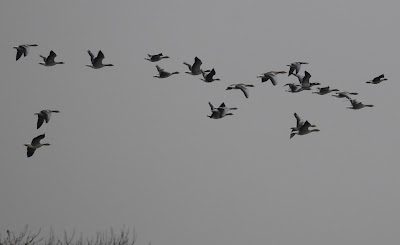 These very obligingly flew to my left later and landed on the river, managed to get a few shots of them along with 5 White Fronts that broke off and headed up river.

500+ Starlings also attracted the attentions of firstly a female Merlin and then a male Peregrine, both came away empty handed.

The Tiercel peregrine I expect I had seen earlier closely watching a flock of Wigeon on a fleet, smart birds, they stayed put despite usually flushing at the sight of me. 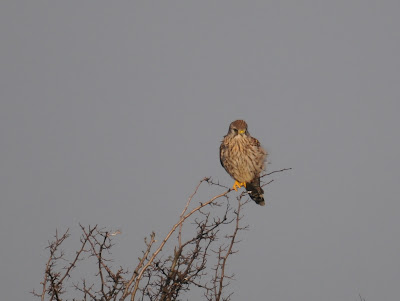 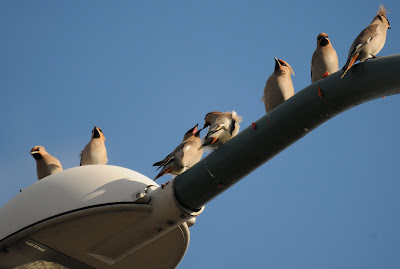