Both sides of the Lake


As part of on-going surveys I visited my Essex recording area on Friday and then visited the Kent side on the Saturday, this is out on the Hoo Peninsula. In Kent we had an easterly biting wind making it feel like -8 on Saturday, with the temperature stuck at 1 above let me tell you it was cold. Standing in one position for 2 hours solid recording wader and wildfowl numbers is not the best way to generate heat and stay warm, my feet fell off.
However the results, especially on Saturday on the Kent side were worth it with wader and wildfowl numbers in my section far higher, if the numbers help stop Boris’s Airport all the better, the bloke is an idiot being advised by even more idiots to even consider it.


With the threat of snow in the air and sub-zero temperatures, all the dyke's and fleets were ice bound on my Transect; consequently the whole survey did not provide one Duck. It did provide many Snipe moving around and on the deck; it was in one such group that I flushed a Jack Snipe, always good to see.
The whole of the site seemed to be covered in Fieldfare and Redwing foraging, it is easy to forget at times like this how hard it is for birds, the weather is a killer. 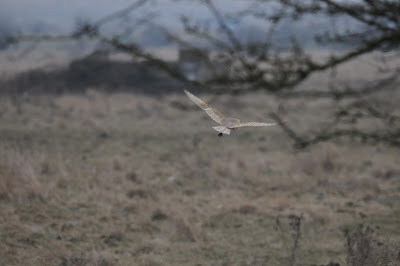 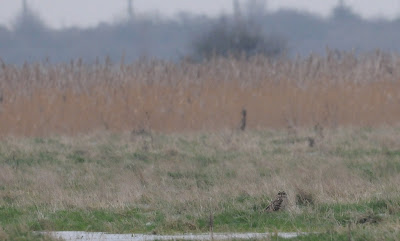 Best sights of the day go to 2 Owls, both Barn and Short Eared were out hunting at mid-day, probably testament to the weather, both gave good views whilst quartering the fields..
The hard weather has also killed a few Sheep, likely old or sick animals and the local Foxes have taken advantage of this before they can be removed, I have never seen so many Foxes in one area, my count for the morning was 8.


Surprisingly as Kent usually gets the worst of the weather compared to Essex, we found it ok to survey although like Essex most of the dyke's and fleets were iced up.

As we parked up at the end of the track, I spied behind Paul a herd of Swans, 12 in number coming from the west distantly, I went for the camera and Paul confirmed through Bin’s they were Bewick’s. The light and distance was absolutely dreadful but the record shots showed 8 adults and 4 immatures, we watched them for a good while and they were last seen flying strongly over Egypt Bay, a great start to the morning. 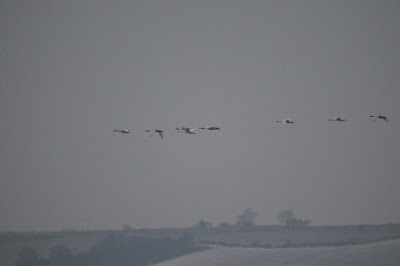 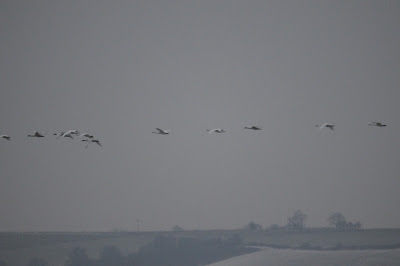 Starting my transect showed that Golden Plover numbers inland were very high and when I eventually arrived at the sea wall after a 2 hour walk, it was obvious that wader and wildfowl numbers had increased on the foreshore.
After 3 counts of Dunlin numbers I eventually arrived at a figure of 4700 birds stretching out as far as the eye could see, also unusually mirroring the Inner Thames, there were no Black Tailed Godwit, this winter they do seem light on the ground?
The Wigeon flock was the largest I have seen since recording the area, one vast flock and 2 smaller flocks eventually gave me a figure of 3200, a spectacular sight. 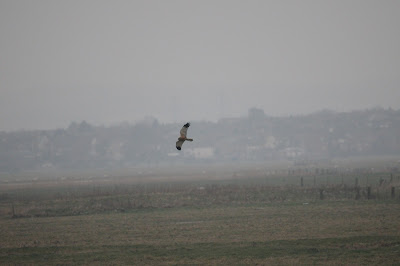 Again no Hen Harrier, last winter we had a Ringtail but not one sighting this winter sadly.