Around this time of year I always start visiting the above 2 sites, last winter Stubbers turned up good birds like Goldeneye, 3 Redhead Smew and the best of all a drake Scaup, just don’t get to see enough of these birds.

Stubbers was first port of call this morning, no Smew but I did locate 2 female Goldeneyes, one gracing either of the 2 lakes so not a bad start.
Elsewhere on site there were good numbers of Pochard(58) and a few more Tufted(64), 12 Siskin also went over and both Great Crested and Little Grebe were present in good numbers.

Not a bad start to the morning so I moved on to first Mollands Lane and then did my circular walk taking in the 3 lakes of Grange Waters.
I looked long and hard for Smew, traditionally they arrive around December 3rd onwards so I was hopeful of one, unfortunately none materialised despite my best efforts, unusually there were no Wigeon present either. This was likely down to frozen snow covered grass and large sections of the lake being frozen over.
From here I headed cross country to the Scuba Diving Lake with its newest resident a Long Tailed Duck found by Paul on Sunday. Being a female as well like the last one it very possibly could be the returning bird from a good few years back.
Anyway I soon located it on arrival and even better managed to get a few photos of it, if it is the same bird that I found a while back, it is now not so wary and a little more approachable. 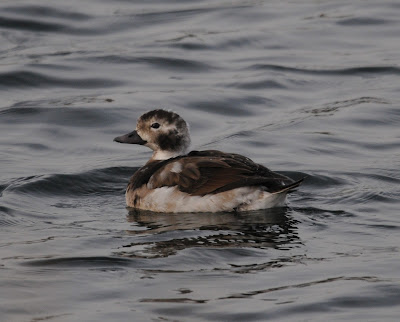 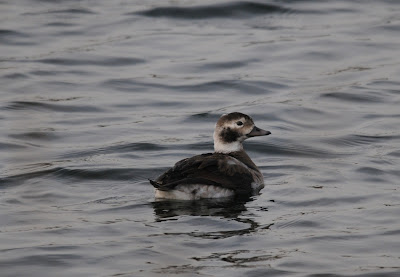 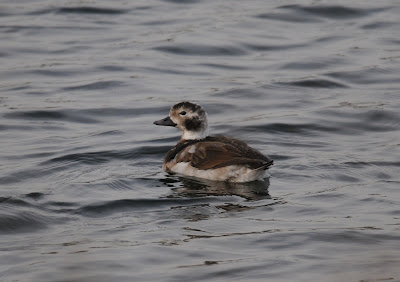 It was while I was taking some photos of the Duck that a Ring Tailed Hen Harrier flew across the lake, I got on it too late as it flew behind some trees in front of me, try as I might I could not get a lock on the focus through all the branches.
A pity as it was relatively close and the photo might not have been too bad even in not great light, can’t win them all though.

After this I searched the reedbed for a Bittern but none on show, they are very hard to see here,
talking afterwards to an Angler and he said he has seen the Bittern last weekend; he described it as a brown Heron so it sounded good.
After this I visited the other 2 lakes, again no Smew but good counts were had of Tufted (317) and Pochard (81), 250 Lapwing on the field as I walked out was a good end to the morning.