Popped into Rainham after visiting a Peregrine site across the river, where due to the very mild weather, the pair are already copulating which is just about the earliest I have recorded it, the next bout of cold weather will no doubt put all this on hold.

The weather was not great but I decided on a walk round my usual circuit hoping to avoid the rain, in this I was lucky.

The foreshore produced around 6 Rock Pipits and a single Water Pipit, having both together also gave me a chance on the call, as you know both calls are more or less identical. After about 10 minutes I found that the Water Pipits call was just about noticeable and subtly different from the Rocks. The difference was there but minimal, if anything the Water Pipits call seemed less sharp which is about the only way I can describe it.
Aveley Bay only held 2 Curlew with little else in the way of waders, across the sea to Kent there were good numbers in the air of Lapwing and Golden Plover.

As I entered the Reserve and walked round I came across the ‘Snow’ Goose in with the Greylags, well done to Howard for later confirming it as a Ross’s Goose, at the time I took some photos and didn’t give it a 2nd thought.
I have placed some photos below showing the Ross’s and the recent Snow seen at Coryton, as you can see distant views show almost identical birds. I know the Ross’s is never likely to be accepted as a genuine wild bird but who would have thought 2 Buff Bellied Pipits in London at the same venue? 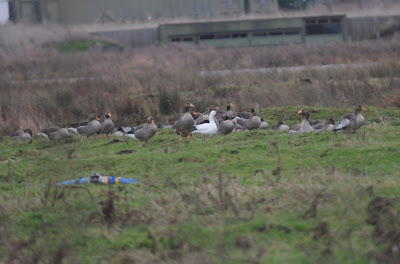 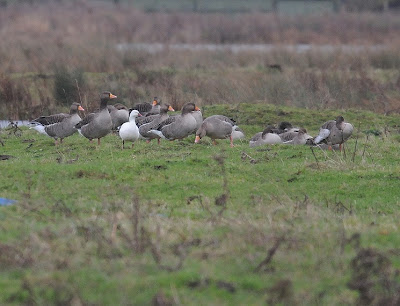 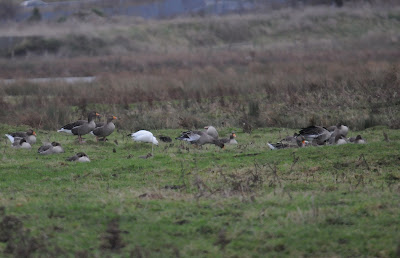 Moving on from the Geese, everywhere seems to be flooded, spot on for Wild Swans or Geese showed little out of the ordinary, a Tiercel Peregrine was present and there were 6 Pintail on Aveley Pools. 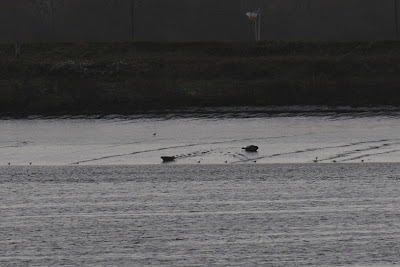 A very unusual sight came as I was walking out of the Centre, 2 Common Seals hauled out on the Kent side, from size they looked like a bull and a cow, it’s not odd to see them this far up but you don’t often see them flat out on the mud.