Parliament - Viz Miging of all things

As I headed down the Embankment for Parliament to check on the peregrines at 6.30am, in slightly murky conditions it has to be said, it came over the radio, a TUC Rally taking in Parliament, all roads around Parliament closed by 7.00am.

First thoughts were I’ve made a cock up and my usual crap timing, never less I carried on regardless and parked up round a back street just before they closed the roads.
In the semi darkness I located the Tiercel at 6.50am at roost and at around 7.20am he flew west, no sign of the Falcon so I settled down to wait in Victoria Tower Gardens Park.


As it turned out I never saw either bird again but was very fortunate to observe a lot of visual migration throughout the rest of the morning up until 9.30am, the majority all going west.

The highlight was undoubtedly a Short Eared Owl high south west at 7.43am, see photos below, bad light and height just made for record shots. 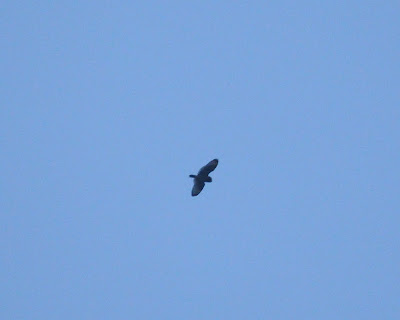 It was mostly small groups other than the Starlings with the main flow of birds and larger flocks coming through from 9.00am to 9.30am.I recorded birds that were relatively low and could id but there was quite a lot more very high that I could not id so it looked to be a massive passage.
Starlings came through in numbers, one flock at 8.35 going west probably totalled around 600 birds, the flock was endless and they just kept coming, in total 830 were recorded throughout the morning. From what I understand elsewhere, Saturday has seen a massive movement through London with large numbers of Redwing moving through.

My totals at Parliament are probably a bit modest compared to other areas in London but in the absence of both peregrines I can’t complain, who would have expected a Short Eared Owl over Victoria Tower or viz miging at Parliament?


Additionally I also had Chiffchaff, 2 Goldcrest and a Song Thrush in Victoria Tower Park. 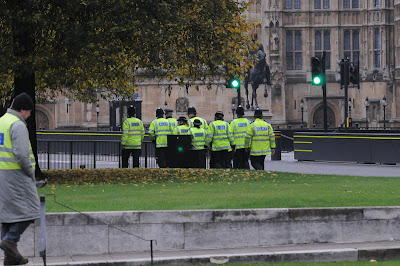 I would have liked to have stayed longer as they were still coming through but the crowds were building and a McDonalds Hot Chocolate was calling me.