My first visit since mid-August, not ideal for photography with grey 100% cloud cover but none the less as I walked on site there looked to be some movement with an early showing of Meadow Pipits heading across the river south.
I decided to give the scrub a good bash and try and cover as much ground as possible, I had Ring Ouzel in mind after last year and hopefully Stonechat, a rarity on the site now, a few years back I remember 6 of them in the scrub.

All in all though it turned out a good morning, no rarities but I did have a single Corn Bunting along the Riverside scrub and adding to this 2 calling Tree Pipits mixed in with the Meadows going south.


The highlight of the morning however was a Seal, I at first thought it was a Grey but now not so sure, possibly Common.
Whatever species it was it had caught a very large fish, likely Bass or Mullett, anglers out there may know from the shape of the tail, photos are grey and distant but watching it for half an hour while it tried to eat the fish was quite entertaining. 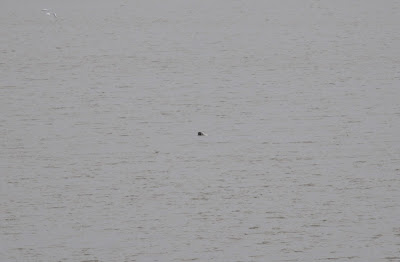 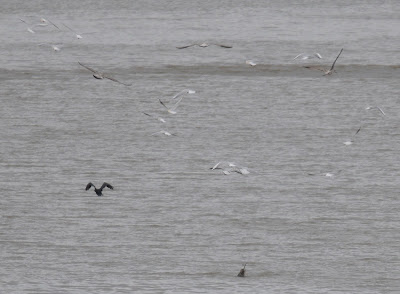 Gulls as usual were giving it a hard time every time it surfaced but after eating the big un, it carried on fishing and then caught a Flattie, I wondered if it only eats the choice bits of the fish and discards the rest. 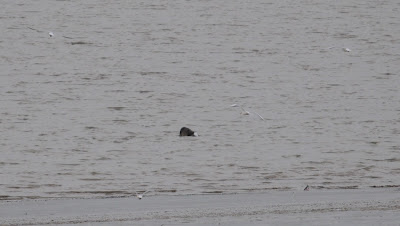 On one of the photos this seems a contradiction as it looks as if the whole fish is going down head first, anyway it is good to see him or her this far up the river, and it also seems very healthy fish wise.