All quiet on the Western Front


As I have mentioned before in the blog, West Thurrock Marshes was once my main patch a few years back but a combination of disturbance by moto x bikes and dodgy remote parking made me question covering it anymore.
It is a good patch otherwise, winter wader numbers are very high for the London area, and it most likely holds the most significant numbers of feeding and roosting Redshank and Dunlin for London, it yearly turns up the highest counts of Avocet every winter. 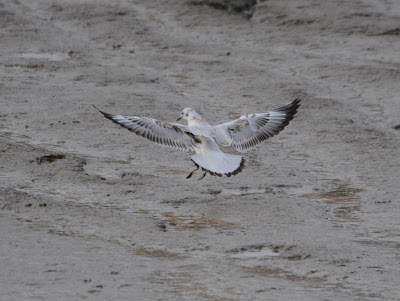 I can still remember finding a Grey Phalarope there a good few years back and briefly photographing a Warbler that on the limited views looked good for Bonelli’s, Dartford Warbler and Grey Partridge have all put in an appearance also. Grey Partridge is now a very hard bird to find in the London area.
Sadly though the site looks as if the Moto Crossers have again took the place over after they were virtually stopped a few years back with heavy duty gates, fencing and regular Police patrols.
The massive rocks put in place to stop them entering the site have been rounded; they have simply smashed the entire bramble down and gone round the rocks in 2 or 3 places. The bolts holding the fencing in place have been removed or sheared off and the fencing just pulled round so they can enter the site.


What the site badly needed a few years back was for the RSPB to get involved with it, being close to Rainham would have benefited both sites as West Thurrock once held large numbers of waders on the old ash lagoons. Being a Brownfield site no doubt it will one day mean that it comes under the Government hammer and another East London site will be lost, a pity as the site has enormous potential as a local Nature Reserve.

On my walk down the sea wall this morning I was hopeful of some waders on the large expanses of mud but other than Oystercatchers, which numbered 11; these were the only waders present, early days yet.
Common Terns are starting to build in numbers with 14 seen all going up river, good to see some juveniles with them also.
Elsewhere I had 8 Swifts overhead going south along with 3 Swallows and a Little Egret was fishing near the Saltmarsh, the Saltmarsh vegetation was very thick and consequently no Snipe were encountered, again rather early for these.
I didn’t walk the woodland but just covered the sea wall, the graffiti as ever was very colourful, some of them are very talented I must say.
Walking back produced very little, should be Wheatears soon.