After visiting a Kent Peregrine site I dropped into the reserve on the way home, although the weather was not too clever at dawn it had brightened up and possibly looked good for a larger Raptor as I arrived.
Walking down to the sea wall and virtually the first birds seen were 2 Black Terns working the river and eventually coming in relatively close, an excellent start and it soon became apparent that there was a little bit of movement .By the time I reached Aveley Bay I had recorded 4 more Black Terns going up river and also 14 Common Terns doing likewise, it was possible that the original 2 Black Terns seen had joined another 2 coming up, who knows? 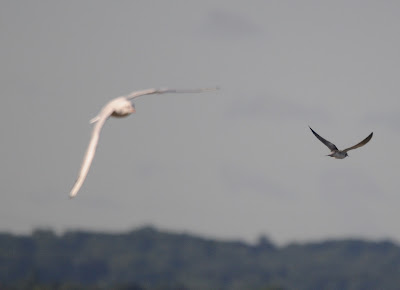 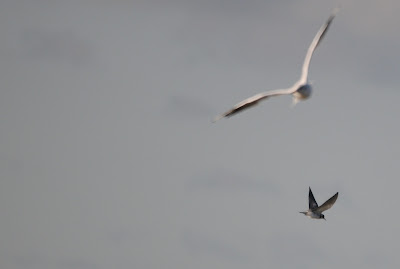 Whimbrel and Common Sandpiper also joined the list as they looked for somewhere to sit the tide out.
With a strong south westerly blowing there sometimes seems no reason why you get Terns coming back up river, with a north/easterly – easterly I could understand it, it is likely that it is the right time of year and the birds are just in the river getting ready to go.

No Wheatear as yet and this didn’t change either even when I entered the reserve; it now seems you are more likely to see a Marsh Harrier rather than a Peregrine or Kestrel when you walk round the reserve. A phone call from Dominic alerted to me to a juvenile doing the circuit and in the process flushing a lot of Snipe, I got onto this and had good but distant views.
Only 3 Yellow Wagtails were seen amongst the cattle and I also had a good search for any Emerald Damselflies, the usual area’s seem to have been abandoned this year, as yet I am yet to see one.

Arriving at the pools where Dom and a fair numbers of birders were watching a good variety of waders, others had more but I saw 2 Ruff, Greenshank, Little Ringed Plover, 3 Green Sandpipers, 2 Common Sandpipers, many Snipe and 4 Black Tailed Godwits. 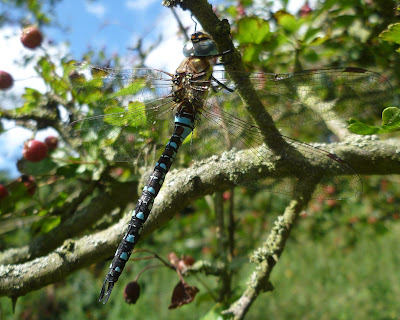 A good finish to an excellent morning’s birding, the finale was 2 Hobbies hawking Dragons over the Marsh, they looked good for adult female and juvenile male, the smaller bird showing a lot of brown in its plumage.