After all the recent bad weather, I decided to get the patch list up and running especially as clear skies and sunshine were promised. I left in darkness around 5.30am and headed for the Optimist end and entered the woodland in darkness, surprisingly the first Owl heard was a Little Owl out in the farmer’s field. It was on the move and kept calling from different sections of the field; it was a good hour before I heard a Tawny. It was heard only twice, not from the usual woodland but the tall trees as you go round the bend just past the Optomist Pub.For some reason or another they don’t seem to call well over the Valley, on other sites they do seem to be very audible.
A good start so headed down to the viewing area as the light was starting to show, 12 Wigeon were a good count, 2 Bullfinch overhead at dawn were also a bonus.
After checking Berwick for the Bittern, no luck, I headed towards the top paddock, checking the Greylag flock produced a very nice White Fronted Goose. They seem, we have had up to 4, to be more or less annual now, and I check the Greylags regularly so it looks as if this is a new arrival. 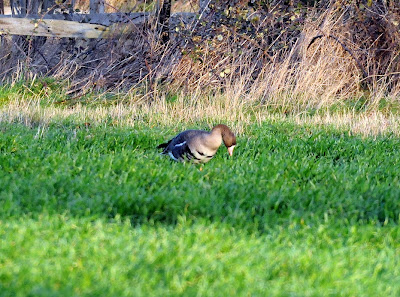 I ended the morning with 64 species seen, the highlight no doubt the White Fronted Goose but also seen were a flock of 70 Fieldfare, 14 Lesser Redpoll, 2 Kingfishers,  3 Ring Necked Parakeets, Yellowhammer and god knows how many calling Water Rail.


With a big bit of luck I could have possibly nudged 70; notable absentees were Mistle Thrush, Sparrowhawk, Kestrel, Great Black Backed Gull, Golden Plover, Snipe and Rook.
Without doubt the best start I have had though so can’t complain.