The weekend and the Valley - Jan 23rd


From past posts you will know I have been doing a lot of surveying lately, the weekend was no different with a visit to the North Kent Marshes. Not an ideal day on Saturday with overcast grey skies in the morning and a very strong south westerly, this put paid to any small stuff making an appearance.
As most are probably aware there has been a Rough Legged Buzzard on this section of marshes, a juvenile, after missing one myself at Sheppey we were optimistic, I was with Paul, that we could see it here.
As you can see from the images below, we did get to see it, very early when the light was bad as we arrived at dawn, but not one to complain even though the views were distant.


Out at dawn again in search of the Bittern at Berwick Ponds, met Les, despite both of us looking, again no sign. As far as I am aware no one has seen any of them this year, there are usually up to 3 birds, unfortunately they are very hard to see over Berwick. If its freezes up it is easier as they are forced out to search for unfrozen waterways and food, elsewhere they do seem to be easier to see. One big reason could be Berwick’s vast reed bed, it holds water throughout, no doubt smaller fish are in the reeds hiding from the bigger predatory fish, Pike and Perch, they probably have no reason to come to the edge of the reeds.
Elsewhere in the Valley there are now 2 White Fronted Geese, no doubt the birds that were seen on Sunday over Rainham RSPB, with a colder snap they may well be joined by more, Gadwall numbers have gone sky high with 78 seen. 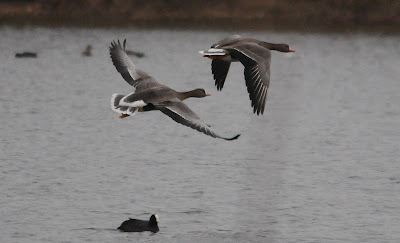 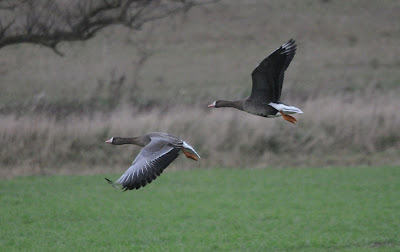 An unusual sight was a Common Buzzard over in a distant field trying to feed on a dead something whilst 4 Crows gave it a hard time. Fieldfare and Redwing numbers are climbing, especially Redwing, they seem to have been a bit thin on the ground this winter.
To round it off, a Tiercel Peregrine was seen going over Berwick Glades, very likely one of the Thames birds having a day out, they do like to wander. 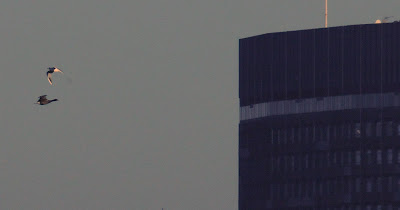