A few of us, myself, Paul Hawkins, Martin Blow, Jono Lethbridge and Shaun Harvey all headed down to Norfolk on the Thursday morning, with Martin Redfern joining us on the Saturday, the idea being to hopefully catch up with some migrants. As most are probably aware Norfolk at the moment is empty with hardly any drift migrants, one big reason being the constant westerly/south westerly winds, it Is also very mild for this time of year.
Despite this I had a really enjoyable trip, good food, too much beer, great company and some good birds. It was also nice to get close up views of the more common species, mainly waders, for this Titchwell beach is ideal, especially if you want to photograph Sanderling. They are certainly more approachable than many other waders and it was the beach that gave us all our best shots.

On the first day we headed down the east coast, the idea being to catch up with the Sandhill Crane, this proved a good move as it departed I believe on the day after. It was good to see one especially for myself having never seen one before, the views were distant and it was very windy, digiscoping was nigh on impossible but I managed to get a couple of record shots. 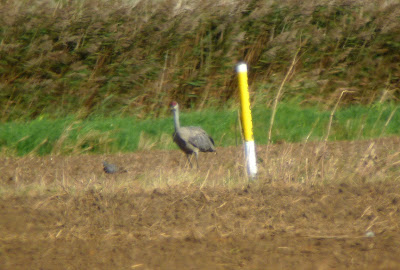 As we birded our way down the coast we headed for the Common Cranes, unfortunately we missed them so headed to our house in Thornham, time was marching on, on the way we started to pick up distant flocks of Pink Footed and Brent Geese but the undoubted highlight was a Ring Tailed Hen Harrier crossing the road before Thornham.
Friday found us debating a distant trip (8 hours) to Lancashire for a Solitary Sandpiper, as some may know I am not a twitcher but my very good mates are, basically they are nuts and not quite right in the head. In the end we decided to wait on news but it never showed again so we went sea watching. Good birds were seen including Great and Arctic Skua, close views of Red throated Divers numerous Gannets and many distant Auks.2 close Bonxies gave the best views, pick of the bunch though were 8 flyover Crossbills. After this we headed for Wells Wood for the Yellow Browed Warbler, eventually all of us getting the briefest views, very elusive.


The afternoon found us at Titchwell, Bearded Tit, Spotted Redshank, and Marsh Harriers were all seen on the walk out to the beach. From here we spent a good few hours photographing various waders with the highlight coming as we walked off the dunes. A windblown Skua, it turned out to be an Arctic was following the line of dunes and coming straight at us, the resulting views as it passed over our heads at no more than 4 metres above were stunning. I think Shaun got the best shots; I had the setting on the camera wrong as usual. If we thought this was good, views of another Skua the next day were unbelievable.

Saturday, me and Mart watched the rugby, Wales played great rugby, we were shit, excuse my French. We just don’t recycle the ball as fast as the others, we need a good scrum half and standoff, Wilkinson has had his day. We have to decide what sought of game we want play.
After the rugby we headed across the marsh to meet the others on the beach at Titchwell, to cut a long story short it turned out a bit of an adventure with an estuary to cross and a rising tide, eventually we both got there with wet feet.


The afternoon again found me, Redsy and Shaun on the beach with the others heading off to Sheringham to sea watch; we were mixing a bit of sea watching with photography. We picked up Bonxie, Eider, 2 Red Breasted Mergansers, Arctic Skua and Sandwich Tern, it was whilst we were doing a wader photo session that I picked up an Arctic Skua harassing a Common Gull.
Eventually it gave up as it was over the dunes and then glided in low and headed back out to sea over the flat sand. It was coming right at me head on, the trick was trying to keep it in focus, it probably passed me no more than 4 metres away giving me the best views I have ever had of one, unbelievably it then gave the same views to Shaun who was positioned further up the beach.

As it flew towards me there were white markings on the ‘hand’ at the front of the wing, not exactly the same pattern both sides but not far off, unusual I have never seen that in an Arctic. Could have done with more light as it was overcast but how can I complain when I get views like this…… 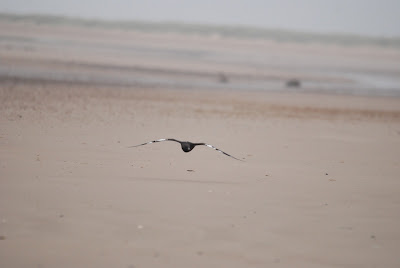 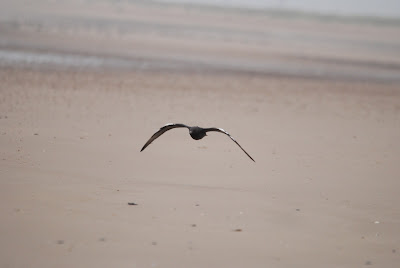 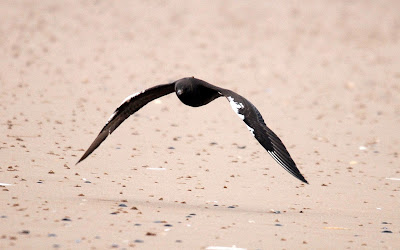 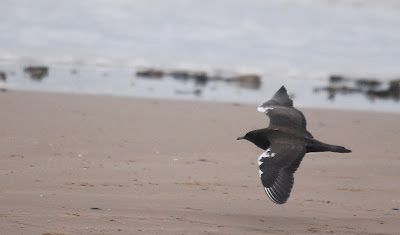