First port of call at dawn found me in Central London checking up on a particular site, I was very fortunate to be in the right place at the right time to witness a confrontation between a male Kestrel and a Magpie.
Magpies being Magpies are, and can be right bullies, they like nothing more than tormenting birds of prey, a month ago I saw 4 of them intimidating a female Peregrine on prey, in the end she moved. Glad to say to say that Raptor honour was held up by the little Falcon, he did a sterling job of defending his little square of territory from the tormenting Magpie, see photos below. 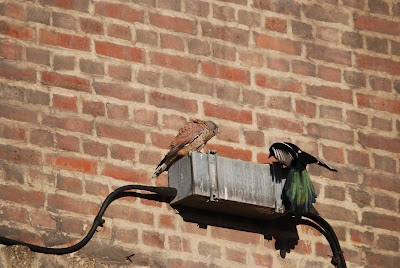 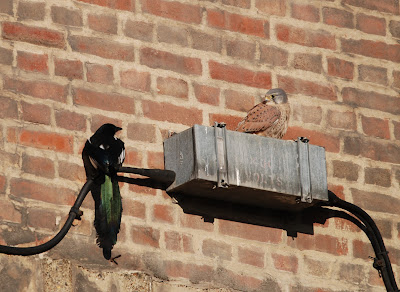 After this I headed for the patch, 14 Redshank were showing on the mud along with a single Black Tailed Godwit, if we get the weather that is promised, very cold and even snow I suspect wader numbers will greatly increase.
It was as I was walking past the middle pond I heard a Bearded Tit call in the fragmites, it was answered by another further along. Eventually the nearest one showed itself, a cracking looking male, possibly part of a local influx as there were 6 today at Rainham RSPB.I also noted that the male that showed had been ringed,will try and blow photos up to see where he is from. 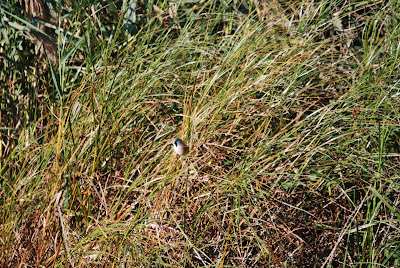 Other than this the Bay was pretty quiet, Red Admirals and Ruddy Darters are still on the wing along with a couple of Migrant Hawkers, Shelduck numbers were around the 70 mark with the Linnet flock starting to build with a flock of 40 seen. The calling Cetti’s Warbler was again heard, possibly a juvenile trying out his voice.