Having been involved with the iconic Power Station and its peregrines now for touching 20 years, I have been a very fortunate man to have witnessed the colossal change from an empty structure to a modern major construction site.

Obviously with the construction and due to the sheer size of the Power Station Estate, a number of Luffer Cranes were needed from the beginning; the total is probably around 21 at the peak of all the various phases.

When I saw all these Cranes going up a good few years back now, it did cross my mind that peregrines have always been a bird of open sky needing clear and open flight lines which suited there prowess and power flying style, would the density of the Cranes inhibit behaviour/flight, in short would they stay? 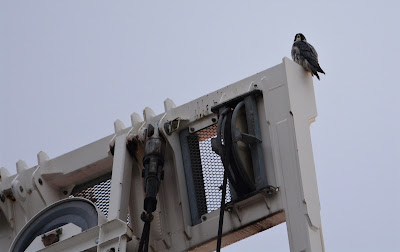 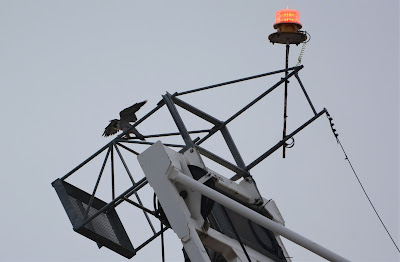 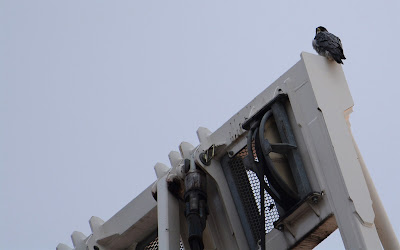 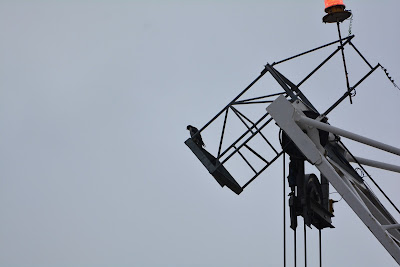 What I had not allowed for in those early days, was the sheer tenacity, adaptability and resilience of this remarkable species to adjust and above all how strong the connection and bond is to the ‘core ‘nesting site.

Watching them recently from aloft and in the past shows that all Cranes are used, whether working or not, yes both adults have mastered the art of ‘riding’ the Crane whilst working.

I have seen it before in London, they obviously know where to sit and rest working or not, if working they simply adjust or turn as the Crane turns/drops the jib down, to watch for Feral Pigeons leaving or passing the Power Station. 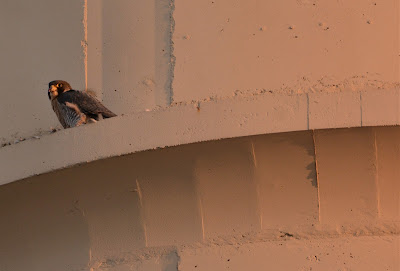 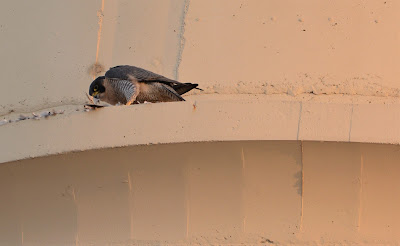 Quite amusing at times when hunting, to see them holding position and readjusting as the crane turns to face the right way for prey activity. As I said they are an incredible species and it shows why they have colonised the UK’s Urban Cities and Towns in such a big way, there are so many strings to their bow.
Posted by Dave Morrison at 20:08