As some may be aware surveys have been carried out for the last couple of years along the Inner Thames, namely the LNHS boundary, 20 miles from St.Pauls which finishes at Northfleet.
A majority of the surveys have been land based and carried out by a good few friends of mine who gave up their spare time to help. The idea is to check each Jetty/Structure at high tide and record waders and wildfowl numbers; it usually takes about 10 to 12 people to cover around a similar amount of Jetties. Similar to WeBS but this is based on the Inner Thames and manmade structures.
The results have been good and over the last year or so the London Wildlife Trust and the Environment Agency have come on board, the idea being to now try and safeguard each Jetty/Structure for the future.
If a Jetty comes under threat/disturbance we can hopefully stop it or at the least identify alternative roost jetties, or some mitigation can be put in place to safeguard roosting waders. In cold weather you don’t want them flying out of the river burning up precious energy.

Last year the Environment Agency very kindly supplied a boat skippered by Tom Cousins and Dave Bartlett, the main aim of the Survey being to photograph each structure from the river, unfortunately last year the weather was foggy to say the least.


On Monday I again got a chance to repeat the survey with Tom and Dave and also Tony Wileman from the London Wildlife Trust, the idea again being to photograph the waders on the structures for reference, unfortunately the weather was again poor with overcast grey skies followed by rain.
However the survey went well and good counts were made along the river, just about decent enough light for photos so can’t complain.
Results showed that Redshank numbers are stable comparing figures to last year; Black Tailed Godwit and Dunlin are not present as yet in the numbers of this time last year in the Thames. Lapwing numbers were slightly lower, but this could well be an oversight as many of the Jetties are unviewable, you can only see perimeter birds. 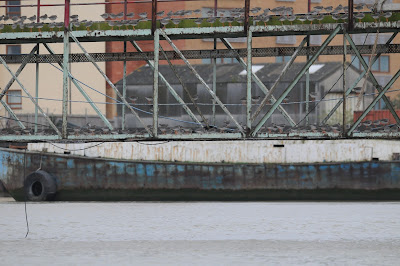 We went right up to Tilbury Docks checking the Kent side on the way up and Essex on the way down, your racing the tide, great fun going from roost to roost at 30 odd knots, grab a few photos and off to the next one.


One of the highlights was seeing HMS Middleton coming out of the river; I believe she may have been moored up to HMS Belfast. 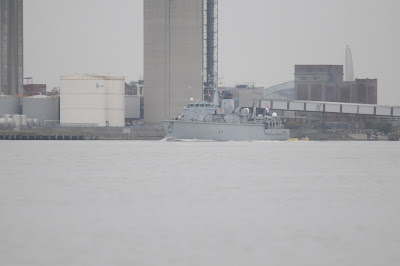 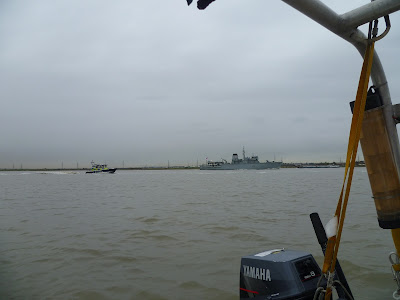 We may well see all the data that has been collected on the roosts come into play soon as Boris’s latest proposal has identified a Car Ferry for Gallion’s Reach at Beckton.This site probably holds the largest colony in London of breeding Lesser and Herring Gulls and up to 200 roosting Redshank on the Jetty in winter. On top of this the mudflats in winter support large numbers of Redshank, Black Tailed Godwit and Teal, with a deep water Ferry the mud flats will obviously go.

For the full story go to tfl.gov.uk/rivercrossings