It has to be said not the most ideal of days to visit the colony with dark skies making photography hard work.
The colony now has many fledged juveniles and these are virtually everywhere you look, my visit coincided with high tide, many of the juveniles had formed ‘crèches’ on the river, not sure what the collective for Gulls is.The colony seems to have reached its maxima and probably goes to show and reflect that how much cleaner the river is nowadays, although I suspect that much of the increase in numbers (see Barking June 22nd) is due to Rainham Tip.

I watched the colony for around 90 minutes, mostly all juveniles are adult sized but there are some, possibly failed or late breeders that have very small young. It was interesting to note that some of these could easily be taken by other adult Gulls but this never happened despite walking dangerously close to them. There is no doubt that they could take them as they do with Moorhen and Coot chicks but it seems cannibalism is not an occurrence in this colony.
Over the last 3 years or so a pair of Great Black Backed Gulls have taken up residence in the colony, they have bred in London before but it is not a regular occurrence. There breeding range referring to BWP stops on the east coast of Scotland and following the east/south coast all the way down it does not start again until it hits the south western coast line.
I am pretty sure that they are in the colony as you will see from the photos but as in other years I can’t visually see the nest. A few years back I got buzzed by a very angry adult in Barking Bay, quite obviously on territory or with a fledged juvenile to protect, it is possible that there are more pairs in the Inner Thames, are they only colonial breeders?
I watched this pair for a good while on the jetty at the Outfall, at all times one adult was always present and constantly disappeared behind a wall, it is possible that there could be juv(s) behind the structure. I know Gary and Nick have also seen them on there as well so signs look good for breeding. 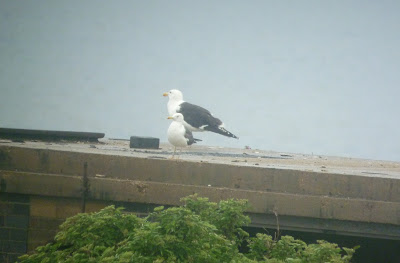 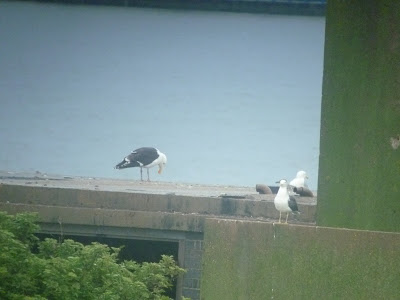 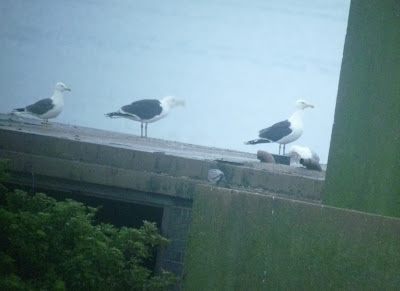 I also this week attended the Thames Tunnel meeting; this is the new tunnel that is to be built which will take away the raw sewage discharges that enter the Thames after heavy rainfall.
I found much of the meeting a bit of an education in relation to wildlife, birds and the connection to invertebrates and the ecosystem, raw sewage has terrible effects on wildlife.

In June last year after heavy rainfall more than 450,000 cubic metres of storm sewage from sewage treatment works discharged into the river. This is equivalent in volume to over 85,000 full builders skips. It was estimated that it killed 26,000 fish. As you can see it has a massive impact on wildlife and this is just the fish in this one particular month, look at the rainfall we have had this year.
For further info click on the link below and download the document, it is an eye-opener.